Before I begin to talk about what we are facing, I want to provide one quote.  In going over my notes regarding the situation of Christians in Muslim lands, I found a quote from Raymond Ibrahim that it is too good not to reproduce here:

“Israel is the dhimmi that got away.”

Dhimmi, defined by Sharia law, is a second class citizen (Jewish, Christian or other monotheist) living in a Muslim society.

What is more, says Ibrahim, Israel is now in a position of authority over some Muslims, and that is intolerable.  Remember, Muslim Arab pride is very important.

I am sorry that my crystal ball seems a big fogged up today.  Perhaps it’s because of the wonderful rain we’ve been having here in Jerusalem — a great blessing.

But at any rate, my capacity to forecast is weak and what I want to do here, in the main, is issue a report:

The barrage of weapons coming from Gaza has been severe. By late yesterday over 100 rockets had fallen in a 24 hour period, and dozens more were launched this morning. There have been hits — in Sderot and on a home in Netivot.  This last was a more powerful Grad rocket, and although several people were hospitalized for shock, thank Heaven, there no injuries.

A series of rockets was launched  yesterday at just about the time for children to be dismissed from school (some, but not all schools had cancelled), and that no kids were hit was truly a miracle.

So, the question is, what happens next.  The residents of the south have had it. As have many members of the government and the Knesset.

Homefront Defense Minister Avi Dichter, for example, is quoted as saying: “There is no precedent in history of destroying terror by air power alone. It hasn’t happened and it won’t happen. Thus it is necessary to reformat Gaza altogether.” “Reformatting” Gaza sounds good.

And Education Minister Gideon Saar said that Israel “was in the last stages of preparing for a very wide military offensive in Gaza.”

While Tzachi Hanegbi, former chairman of the Knesset Foreign Affairs and Defense Committee, said today that “Israel’s deterrence against terror from Gaza, including Hamas and others there, no longer exists, and now we find ourselves in a countdown toward a large and aggressive ground operation in the Gaza Strip. Air power has run its course. They have obviously forgotten the lessons they learned from Operation Cast Lead.”

What Hanegbi suggested is that this action should not resemble Cast Lead but, instead, Operation Defensive Shield,during which the IDF moved into large Palestinian Arab cities in Judea and Samaria in 2002 in order to root out terrorist forces..

So, maybe this time…

Another indication that something might be happening is that PM Netanyahu is calling for meetings with foreign ambassadors, reportedly to diplomatically pave the way for an understanding of our need to attack.

I hesitate to predict an attack, however, for at least a couple of reasons.

First, why so much talk? Why are they not shutting their mouths and letting our military actions speak?  Is this talk nothing more than empty saber rattling?

And then, Barak made a statement about the strong action we will take “if it is necessary.”  IF?? It IS necessary. Is he looking for an out?

As I write, the number of rockets being launched is fewer, and there’s talk of the possibility of an Egyptian-negotiated cease fire.

This would be deplorable.  One woman resident in the south was quoted as saying, “This is the worst it’s been in months.” And that’s the point.  If there is such a ceasefire then, at the will of the Islamic terrorists, there will be another barrage in another few weeks or months.  And our civilians continue to be at their mercy.

I fear — I always fear this — that it will take, G-d forbid, the death of some of those civilians to motivate what should be undertaken immediately.

Deterrence power is the key here. This means we instill sufficient fear of Israel and how we will respond into these jihadists so that they hesitate to launch against us.

I don’t know if it should be a full operation into Gaza, or bombing of the headquarters of Hamas and other groups so that leaders become afraid or the taking of certain cities.   That is for the military people to decide.  What I do know is that it is time — past time — for a powerful action that hurts them badly.

I mention again here, as I have in the past, that I have no doubt that Hezbollah is watching.  They will mark well how we respond in Gaza and may temper their actions against us accordingly.  This is all part of deterrence.

Frankly, I am hard put to understand why it should be necessary (if this is what is about to happen) for our prime minister to explain to foreign diplomats our need to attack before we do so.  They have eyes and ears. And living in Israel they are privy to Israeli news (even if international news doesn’t carry the story). They know what the Gaza terrorists are doing, and they know that their own nations would tolerate no such thing. What’s to explain?  And why give the terrorists a heads-up on our intentions?

It is our place to act as we need to, with pride, as a sovereign nation.

We should begin our operation without prior fanfare, in my opinion, and then the prime minister can call a press conference saying, “Here is the evidence of rockets launched against our civilians without provocation. The world can thus see for itself the necessity of what we have now undertaken.  Israel will not allow its citizens to remain at risk.”  Period. No permission sought and no apologies.

What I must also report here is how tense matters are at our northern border with Syria.

Yesterday morning, after a 120mm mortar shell landed in the Israeli Golan, for the first time since the Yom Kippur war in 1973, Israel fired directly into Syria.  A Tammuz missile was launched, not for purposes of direct hit, but rather to indicate, with utilization of that very sophisticated missile, that Israel was serious in demanding that the civil war not begin to move across the border.

Now today, another shell struck Israeli territory, and this time retaliation was with tanks stationed near the border.  This was more than a warning: two D-3 mortar launchers belonging to the Syrian army were hit directly. 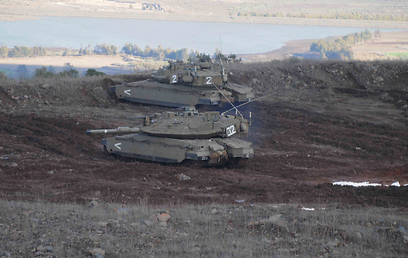 Israel has no intention of becoming involved in the Syrian civil war, and that attitude has been conveyed to the UN and in other venues.

One would think that Assad has his hands full enough at present, and will absorb the Israeli message and attempt to pull back fighting from so close to the Israel Golan.

But Assad is desperate, and desperate tyrants do crazy things some times.  There is no predicting here, either.

I do not believe, however, that we can allow this to deter us from what we must do with regard to Gaza.  Our military is well prepared for a variety of scenarios, including the possibility of contending on more than one front.