Hope for a strengthening of the US, as Hillary may be headed for defeat.  Hope that America may not implode.

I’ve had a suspicion for some time that the polls showing her ahead were not accurate, and that many more intended to vote for Trump than the numbers indicated.  But now we’re seeing in some polls that those numbers have shifted.  Even before the FBI announcement regarding the possibility of more information on Hillary emails, her lead had shrunk.

Since that announcement, there is indication that roughly 1/3 of those who would have voted for Hillary are prepared to re-think their position.

I share this fine analytic Pat Condell video about the electoral choices.  And I thank Martin Sherman, who promoted it.

”A 1,000-year-old Muslim inscription provides yet more proof of Jewish ties to the Temple Mount and Jerusalem. On Thursday, archaeologists Assaf Avraham and Perez Reuven presented the inscription that was discovered at a recently excavated mosque in the village of Nuba near Hebron. It refers to the Dome of the Rock (pictured) on the Temple Mount as ‘Bait al-Maqdess,’ an Arabicized version of the Hebrew words for the Temple, Beit Hamikdash. Other sources from the early Muslim period also refer to the Dome of the Rock as ‘al-Maqdess,’ demonstrating how Jewish tradition influenced the religious worldview of nascent Islam in the seventh century.

“’There is plenty of evidence that shows the Jewish influence on the Muslim world at the beginning [of Islam]. Among other things, we can take notice of Muslim coins minted in the Land of Israel in the eighth century by Muslim rulers, which feature the symbol of the menorah of the Temple,’ Avraham said.”  (Emphasis added)

The Dome of the Rock is not a mosque, as many think, but a shrine, built on top of where the Temple, and likely the heart of the Temple at the Holy-of-holies stood.  It houses the Foundation Stone of the World (Even Shetiya) that is at the pinnacle of Mount Moriah.

This, our tradition tells us, is where Avraham was sent to sacrifice Isaac.

The push to apply sovereignty to Ma’aleh Adumim, a Jewish community of 37,000 immediately to the east of Jerusalem, is hardly new.

But every time this idea has been advanced, there was so much noise from the Arabs and the international community that our government backed off.

Key to the discussion has been development of the area of E1, which would make Ma’aleh Adumim contiguous with Jerusalem.

But it has been precisely this that the Arabs most stringently resisted, claiming it would interfere with the contiguity of their “Palestinian state.”

Now the issue is being raised here in Israel with greater urgency and fervor.  As the Knesset began its winter session, after a summer-holiday recess, a demonstration was held in favor of applying sovereignty as a way of protecting the unity of Jerusalem.  Were the Arabs to gain control of the E1 area, they would encroach into the eastern part of Jerusalem, and attempt to coopt it.

Deputy Minister of Foreign Affair Tzipi Hotovely declared that it was fitting for the Knesset to approve this action as we approach the 50th anniversary of the Six Day War, which liberated Judea and Samaria.  “Judicial advisors and international pressure should not determine an issue that is so substantive for us.”

Coalition Chairman David Bitan (Likud) assured those gathered, “We don’t have to be afraid,” he said.

MK Bezalel Smotrich (Bayit Yehudi), who co-chairs the Knesset’s Land of Israel Caucus, said this was an initiative that would succeed. “The time has come to be normal.”

And, indeed, as Ma’aleh Adumim Mayor pointed out, this is a consensus issues, as in an opinion poll done last spring, 78% of the respondents were in favoring of applying sovereignty to Ma’aleh Adumim.

There’s a shift in the air, folks, and it’s good news.

There is even a recognition of that shift on the part of the leadership of mainstream American Jewish organizations.  Until now a ludicrous politically correct situation has existed, in which representatives of these organizations were banned from going to Judea and Samaria on official visits.

But now the Jewish Federations of North America (JFNA), the umbrella organization that includes the Council of Jewish Federations, the United Jewish Appeal and the United Israel Appeal, has voted to permit its representatives to conduct official visits to Jewish communities in Judea and Samaria.  Thus were they prevented from getting to know people in the Jewish communities in these regions.

As Mort Klein, National President of ZOA, said in a press release:

“The residents of these Jewish communities, living in the historical, biblical land of Israel, are every bit Israeli citizens as their fellow citizens within the Green Line. They serve in the army; they pay their taxes; they contribute to the national economy.

“Indeed, they suffer for living on Israel’s front line, enabling Israel to guard defensible frontiers, which the 1949 armistice lines never were.

“Jews have a moral and legal right to live in Judea/Samaria, stemming from the 1920 San Remo [resolution] that earmarked this territory for Jewish settlement and which has never been superseded by an internationally-binding agreement.

“Indeed, there is something perverse in the idea that an entire segment of the Israeli Jewish population be off-limits to contacts with their North American Jewish brethren because of where they live, and it is long overdue that this sorry state of affairs has now come to an end…

“…We urge all Jewish groups like AIPAC and others to begin to visit the Jewish communities in Judea/Samaria, as well.”

As I had mentioned in an earlier posting, we are now approaching 100 years since the Balfour Declaration – which recognized Palestine as a homeland for the Jewish people and upon which the Mandate for Palestine, established in international law, was subsequently based.

As of November 2, Mahmoud Abbas will kick off his “year of the Balfour Declaration,” during which time he will demand an apology from Britain, and publicize all the “crimes” committed against the “Palestinian people” in the name of this Declaration, which originated with Lord Balfour of Britain.

See an excellent piece by MK Benny Begin (Likud) on this:

And speaking of Mahmoud Abbas, there is a great deal of press these days about what’s going on with him and the PA.  There seem to be a number of internal conflicts within the PA/Fatah, and a restructuring of alliances outside.

It is being said – not for the first time – that Mohammed Dahlan (pictured) is challenging Abbas for PA leadership, and is now supported by Egypt. Under Arafat, Dahlan was head of preventative security in Gaza, where he was born. He wielded, shall we say, a tough hand against Hamas (which had not yet taken over).  Later he came out as anti-corruption.

Meanwhile, Abbas is moving towards reconciliation with Hamas once again, and met with outgoing head of the Hamas politburo Khaled Masha’al (pictured) in Doha, the capital of Qatar, which supports the Muslim Brotherhood.

While Fatah, the party of Abbas, is about to hold its first Congress since 2009  – probably in November – amid rumors of intentions to seek a successor to Abbas, who is 81.

So how do we make sense of all of this?  I’m not going to give you a summary of what most journalists and commentators are saying.  Rather, I’m going to provide here a different perspective, acquired from a contact who has connections in the PA.  Several times in the past he has provided me with information that has turned out to be absolutely on the mark.  Let’s watch this:

Abbas, says my contact, indeed does want to retire. But he’s got several problems. The first is that he cannot allow Fatah to select his replacement: there is enormous resentment against him because of his massive corruption.  He is afraid of being exposed, and hopes to protect his financial empire for the sake of his sons.

The second is that he does not have a place in which to retire.  If he stays in the PA area, he will be killed. You need to wrap your head around this to understand the situation. His desire is to retire in Qatar, where he believes he would be safe.

Qatar is willing, but for a price.  Qatari leadership wants Hamas involved in the PA.  Thus Abbas’s meeting with Masha’al in Qatar.

This, says my contact, is Abbas’s plan:  He wants to bring in Jabil Rajoub (pictured) as his successor for an interim.  Another tough guy – the entire cast of unsavory characters in this drama is incredible! – he was head of preventative security in the PA areas of Judea and Samaria.  Today he heads the supreme council for sports and youth affairs in the PA, enjoys harassing Israel, and has publicly praised terror attacks.

Rajoub is on the Central Committee of Fatah, but – as he already has Hamas and Qatari connections – he is someone with whom Abbas can work.  The avenue for these connections is politics-cum-sports. Qatar – with its interest in promoting Hamas – funds Rajoub’s football league, which is directly tied to sports activities with Hamas (with the son of Ismail Haniyeh, who is scheduled to succeed Masha’al) in Gaza. It’s convoluted and surreal.  But it may well describe what is happening. 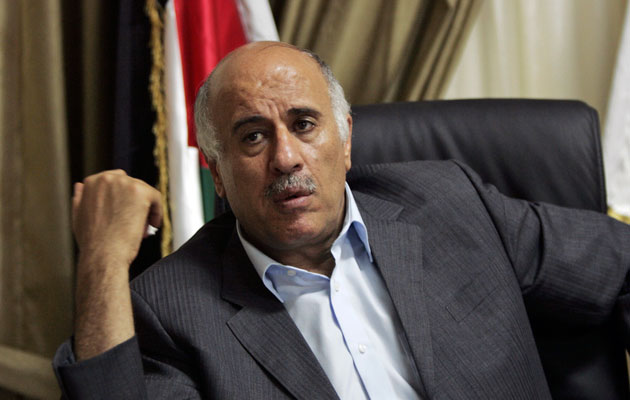 Once installed, Rajoub would bring in Masha’al, who would work with him and slowly take over.

Can Abbas pull this off?  No clue.  But this inside report provides a clearer picture of Abbas’s situation and where he sees himself headed.  If this were to happen, with Fatah sidelined and Hamas – which is ever eager for this “opportunity” – taking the reins, there would be a significant shift in the dynamic here.

Egypt’s support for Dahlan, I’ve been told, is only with regard to his ability to act in Gaza, not because the Egyptians are eager to see him heading the PA.

On Monday a PA police officer wielding an AK-47 assault rifle wounded three IDF soldiers, one seriously, at a checkpoint near Beit El.  He was shot and killed.

While today Border Police grabbed a female terrorist toting two knives who was headed towards the Machpelah in Hevron.

At the Cabinet meeting on Sunday, Prime Minister Netanyahu announced that in coming months he will be visiting three countries never before visited by a sitting Israeli prime minister – Australia, Singapore and Kazakhstan – with a visit as well to Azerbaijan, which he visited briefly once before.  I continue to praise the prime minister for these efforts, which I see as one of the most successful elements of his administration.  Solidifying ties to diverse nations, especially to the east, is an important move right now.

Both Azerbaijan – which sits strategically at the border of Iran – and Kazakhstan are majority Muslim countries.  Most of the oil Israel purchases comes from these two countries.

Netanyahu’s stop in Singapore will be reciprocal because of the visit here last April of Singapore’s prime minister, Lee Hsien Loong.

The visit to Australia is planned to express appreciation for Australian support Israel has received.

And some “good news” briefs:

“Israel is the second most innovative nation in the world, according to the World Economic Forum’s Global Competitiveness Report 2016-2017, which ranks countries’ competitiveness based on 12 categories, including innovation, technological readiness, business sophistication and higher education.”

Right in line with this, see:

Something a bit different in closing: