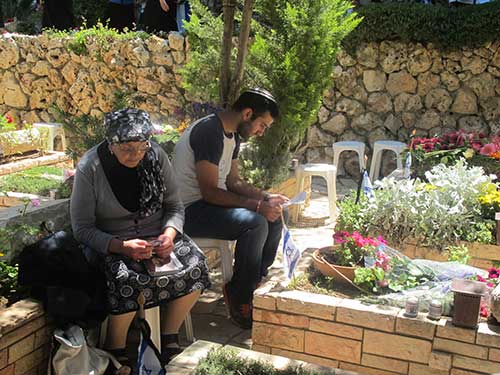 Israel’s Memorial day – a day for remembering all those from our defense forces who have died defending the country, and all those who have died at the hands of terrorists.  It is a day of national mourning.  Just about everyone in the country has either suffered a personal loss or knows someone else who has.

I dedicate this posting to all of them.

If not for the readiness of our soldiers to risk their lives in the defense of Israel, there would be no Israel.  Our debt to them is boundless.

Our responsibility is to remember them, honor them, and keep this nation strong.  They have given their lives for this nation. We owe it to them to reach to our own limits in building Israel and bringing blessings upon her.

A siren at 8 PM last night marked the beginning of the day of memorial – with official ceremonies at the Kotel.  A two-minute siren sounded again at 11 AM today.  As the siren begins, everyone stops and stands at attention.  Today, tens of thousands visited the graves of their loved ones.

I confess that I am in awe, with an astonishment that is two-fold. The stories abound of young people who acted with extraordinary bravery, ultimately giving their lives in the process.

What Roi Klein did is one such story.

And I am awed as well by the strength of families – parents, spouses, siblings, children – who find ways to carry on.  No, “carry on” does not sufficiently describe it.  They find ways to embrace life and to bring goodness to life in the memory of the one they have lost.

Rabbi Stuart and Susie Weiss – whom I was honored to hear speak last night – are such people, doing good in the name of their son, Ari Yehoshua, who fell in Shechem in 2002.

And here is something Rabbi Weiss wrote.  A week after his son died, he eulogized him and then asked that everyone assembled go home and sing “Am Yisrael Hai” The Jewish People lives.  This extraordinary piece explains his thinking.