The heads of many of us – as we survey the current situation – are spinning.  This is for certain.  But in a larger sense, I feel as if the world is also spinning: in reverse.  Situations are not static, they change.  But I’m hard put to see a great deal that counts as improvement. With regard to so much on the global scene, it is the contrary.

That being the case, I’m going to start this posting with good news.  Because, in spite of what I’ve just written, good news does exist in many spheres, if we take the time to seek it out.  And seek it out we must, if we are to stay sane and balanced.

SACH – Save A Child’s Heart – is an Israeli-based international organization dedicated to improving the cardiac care available to children in developing regions.  At this point, SACH has saved the lives of over 3,500 children from Africa, South America, Europe, and the Middle East. The number of countries involved in the program has reached 50 – the most recent patient having come from East Timor. Half of those treated are Palestinian Arab children from Gaza and Judea and Samaria; there are also hundreds who come from the war-torn areas of Syria and Iraq, including a 17-month-old boy from the Yazidi minority in Iraq.

The cost of care is covered entirely by the organization and doctors work at their own expense.  In addition to treating children here in Israel – at the Wolfson Medical Center in Holon, SACH has trained more than 100 medical personnel.  There is, for example, Dr. Yayu Mekonnen, who is in the third year of a five-year training program here in Israel. When he returns to his native Ethiopia, he will become his country’s first and only pediatric heart surgeon. 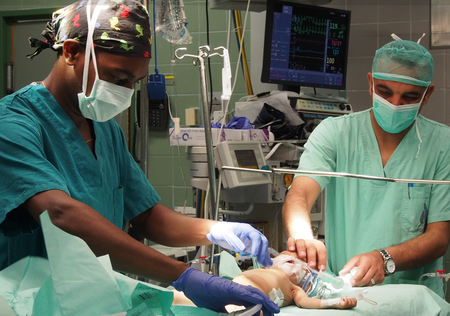 The world at large will never know what we do – because it does not want to know. But we know, as do the recipients of our tender care, and… I am convinced… so does the Almighty.

Another piece of encouraging news.  Background:

In 1885, a Yemenite village for some 65 families was founded on the slopes of the Mt. of Olives and a synagogue was established.  A Zionist philanthropist had contributed the major part of land on which the community built.

In the 1930s, the Yemenite Jews of this village were attacked by Arabs, just as Jews in many places in Palestine were.  The British, who held the Mandate for Palestine and were charged with working towards establishment of a Jewish homeland, told the Jews of the village that they could not protect them and they must leave.  This too happened in many places, including Hevron.  The British were supposed to protect the Jewish property and allow the rightful residents to return in due course.  None of this happened.

In recent years, buildings in the area have been carefully identified, property that was originally Jewish has been repurchased and Jewish families have moved back in.  Said Daniel Luria of the Ateret Cohanim Association, which has been overseeing this process of return (emphasis added):

“People must understand that this neighborhood was built by Yemenite Jews 130 years ago – way before any Arabs ever lived here.”  He reinforces the point with photographs of the time.  They tell a very different story from the one that charges Jews with “usurping” Arab land.

What has happened now is that the original synagogue of the village has been refurbished and rededicated.  It has been renamed Ohel Yehonatan in honor of Jonathan Pollard.

Minister of Agriculture Uri Ariel (not pictured) affixed the mezuzah to the doorpost and recited traditional blessings.  “All we need,” he said, “is true peace between Jews, and then we can work things out with everyone else.”

In spite of the confusion that has ensued, I see the possibility, as well, of some significant good coming from the new government.  Gilad Erdan has now joined the Cabinet, with the portfolios of Public Security, Strategic Affairs and Public Diplomacy (the last not reported by me yesterday).  You can see how “public diplomacy” seems to overlap with foreign affairs, so that there remains a lack of clarity in terms of who is actually responsible for what.

And yet…Erdan says he has been given the tools to reform (and, I am assuming, strengthen) the police.  “I have the ability to bring about real change,” he said. “I’m going to work hard and I’m committed to making achievements.”

Please understand, even though an increased police budget is helpful, part of the issue has nothing to do with money.  It is, rather, a question of the directives that come from the top regarding dealing with Arab violence with toughness.  Erdan’s immediate predecessor, Yitzhak Aaronovitch, lacked that toughness.

This is the sort of situation to be dealt with:

Immigrant Absorption Minister Ze’ev Elkin, pictured, who was required to surrender the Strategic Affairs portfolio to Erdan, has been given the Jerusalem Affairs portfolio.  Elkin is on record as being opposed to any Israeli withdrawal from Judea and Samaria, and favors annexation.  We must hope and trust that he will watch over a united Jerusalem with diligence, with whatever authority has been accorded him.

In many respects, however, the situation we are surveying runs the gamut from merely worrisome to horrifying.

On the worrisome side, we’ve got President Ruby Rivlin, who has turned out to not be exactly what many of us thought he was.  OK, he wants to be president of all Israelis.  Fair enough. But he is overdoing it:  He is about to receive an award from the New Israel Fund, which is overtly destructive to Israel – financially supporting organizations that promote prosecution of our soldiers for war crimes and that seek to undermine Israeli democracy from within.  Rivlin will not be swayed.

Unfortunately he will be providing legitimacy to an organization that deserves none.

More deeply worrisome is President Obama, who is in a feigned “I love Israel and the Jews” mode, having delivered a speech attempting to demonstrate this fact at Adas Israel Congregation in Washington, DC.

His words were incredibly over the top:

“Earlier this week, I was actually interviewed by one of your members, Jeff Goldberg. And Jeff reminded me that he once called me ‘the first Jewish President.’ Now, since some people still seem to be wondering about my faith I should make clear this was an honorary title. But I was flattered.

“And as an honorary member of the tribe, not to mention somebody who’s… been advised by two Jewish chiefs of staff, I can also proudly say that I’m getting a little bit of the hang of the lingo.”

An honorary member of the tribe??  This is painful. And yet, the likes of Alan Dershowitz, who was critical of Obama for a time, has suddenly discovered anew that Obama is a good guy and pro-Israel.

Sigh…  Obama is posturing, for whatever purpose, and no more.

Yes, there just was an instance of importance in which Obama supported Israel – blocking efforts by Egypt, in the course of a conference to review the Non-Proliferation Treaty, to advance a nuclear-free Middle East.

But he has also just let it be known that because he “loves” Israel, he has a right to criticize, on such issues as “settlements.”  And he has spoken inappropriately  – censuring Israeli democracy, which he sees as “eroding,” because the government does not support what he wants it to. These are not the stances of a true friend who respects Israeli autonomy.

And so…it is appropriate to thank him when he supports us.  But never, ever should he be trusted.

What approaches the horrific is the threat Israel lives with at all times of war ensuing on one or multiple borders.  Here I share what Omni Ceren of The Israel Project has written (emphasis added):

“…Two weeks ago there were major recent pieces in the NYT and AP articles, where journalists got to look at IDF aerial photography showing that Hezbollah has moved the vast majority of its military infrastructure into Shiite villages. They’ve taken their arsenal – 100,000+ rockets including Burkan rockets with half-ton warheads, ballistic missiles including Scud-Ds that can hit all of Israel, supersonic advanced anti-ship cruise missiles, anti-aircraft assets, drones and mini drones, tunnels, etc. – and embedded it across hundreds of villages and probably thousands of homes.

“The Syrian war has been good for Hezbollah in that respect. They’ve cleaned out Assad’s depots and brought the goods back to Lebanon.

“The Israelis can’t afford a war of attrition with Hezbollah. The Iran-backed terror group has the ability to saturation bomb Israeli civilians with 1,500 projectiles a day, every day, for over two months. They will try to bring down Tel Aviv’s skyscrapers with ballistic missiles. They will try to fly suicide drones into Israel’s nuclear reactor. They will try to detonate Israel’s off-shore energy infrastructure. They will try to destroy Israeli military and civilian runways. And – mainly but not exclusively through their tunnels – they will try to overrun Israeli towns and drag away women and children as hostages. Israeli casualties would range in the thousands to tens of thousands.

“And so the Israelis will have to mobilize massive force to shorten the duration of a future war. One of the things they’ll do is immediately is move to eliminate as much of Hezbollah’s vast arsenal as possible. Hezbollah is counting on the resulting deaths of their human shields…to turn Israel into an international pariah. But the Israelis can’t let Hezbollah level their entire country with indiscriminate rocket fire and advanced missiles, just because no one in Lebanon is willing or able to expel the group from Shiite villages.”

Makes the blood run cold.  The most moral of armies confronting an enemy with no moral compass or value for human life at all.

As I am writing, notice has come through of sirens sounding in the south of Israel. At least one rocket has been launched from Gaza, apparently by Islamic Jihad.  The rocket, which caused no injury or damage, landed in the Ashkelon area.

And then we have the obscene war going on in Syria and Lebanon.  The wholesale deaths, the actions of people who can only be described as savage (and I do not use this word lightly!).  The back and forth between Shia and Sunni.

The risk to the ancient ruins of Palmyra, now in the hands of Isis.

Matters are so upside-down that we see Iran criticizing the US for not hitting ISIS hard enough.

Matters of the “peace process” and pressure being placed on Israel, as well as issues of BDS, will be considered in some detail in future postings.