Now that I will have time again, after a hiatus of some several days, I want to resume my postings.  (Actually, I’ve missed writing.)  I will touch certain bases here, and return to consider many others later.  Please do know that Sunday is the holiday of Shavuot here (and Monday as well, outside of Israel).

We begin with a memoriam: Dr. Robert S. Wistrich, a world-renown and highly respected scholar of anti-Semitism passed away of a sudden heart attack in Rome two days ago, at the age of 70.  Dr. Wistrich, a professor of Jewish history at the Hebrew University of Jerusalem, for many years headed the Sassoon International Center for the Study of anti-Semitism.

He is described by those who knew and loved him as a brilliant man of extraordinary integrity and great humanity.  He will be sorely missed. 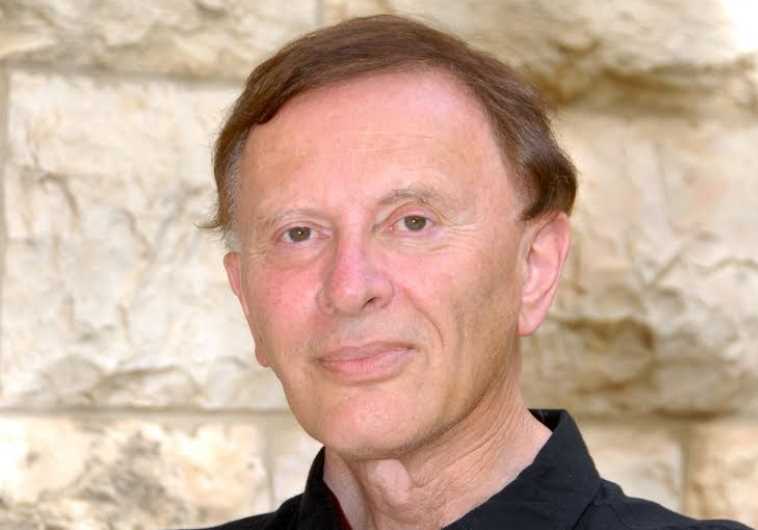 I include here a video of Wistrich’s last presentation, which was at the Global Forum for Combatting AntiSemitism and has been highly praised.  It is in two parts:

Well worth the time to view this.

I do not know of anyone here in Israel who was contented with the lengthy (agonizing?) process – as it unfolded – of forming the new government.  Once again, there were rumors, and charges and challenges – with multiple MKs in some instances vying for the same ministerial positions, and Likud MKs voicing discontent with the number of major positions given away to other parties in the course of negotiations.

Yes, my friends, there has to be a better way.  No need to write to me to suggest this or to propose alternatives.

My own greatest discontent came, I think, with the recognition of what we facing down the road: Get with it! I wanted to tell them.  Work together to strengthen the country rather than your own political careers or your own party.  But, regrettably, with very few exceptions, this is not the way it goes.

Prior to the establishment of the government, an amendment to Basic Law was passed in the Knesset, in order to increase the number of ministers who could be appointed.  This was done in large part to address the dissatisfaction of Likud MKs who felt they had inadequate opportunity to secure ministerial positions after the coalition negotiations were complete.  What is more, some “creative” division of ministerial responsibilities ensued, in order to satisfy certain MKs, which resulted in leaving certain others less than content.

And so, a government was formed, just in the knick of time.  It rests upon a coalition comprised of just 61 members, which means that unless those members do work together there is a constant risk of instability.

The government was sworn in, in the Knesset, just a week ago. 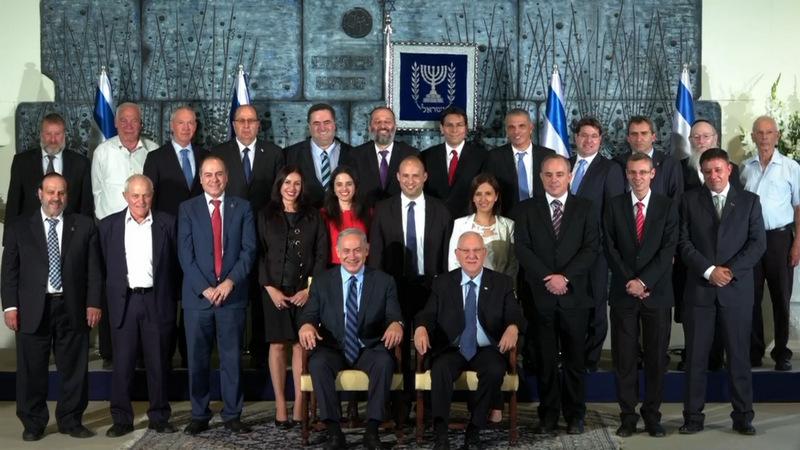 At the first meeting of the Cabinet, which followed, Prime Minister Netanyahu said (emphasis added):

“From this moment on, we must leave our differences outside this room and focus on doing good for the citizens of Israel, all the citizens of Israel…We will take decisive, responsible, aggressive action against any attempt to challenge our borders and our security, be it from near or far.”

More on this below.

Prime Minister Binyamin Netanyahu is reserving for himself the positions of Foreign Minister, Minister of Health and Minister of Communications.  He has said repeatedly that he is not appointing anyone as foreign minister because he is reserving it for the possibility of enlarging the coalition.

His retention of the Foreign Ministry is widely interpreted in one of two ways: Either he hopes that Avigdor Lieberman, who was previously foreign minister and now sits with his party, Yisrael Beitenu, in the opposition, will finally agree to join the coalition after all.  Or that (Heaven help us) Yitzhak Herzog, head of the opposition, will join.  Both Herzog and his faction partner, Tzipi Livni, are on record as refusing to help out Netanyahu by strengthening his coalition.  Their stated preference is to let him fail; but there are no guarantees that Herzog won’t change his mind at some point.

It is important to note that Tzipi Hotovely (Likud) has been appointed Deputy Minister of Foreign Affairs, a position potentially of considerable responsibility in light of the fact that there is no independent Foreign Minister above her.  However Netanyahu has undercut her severely by giving Silvan Shalom responsibility for negotiations with the Palestinian Arabs and strategic dialogue with the US as well as communication with the international community regarding Gaza. Shalom has declared that he is “de facto foreign minister.”

I note as well that Yakov Litzman (United Torah Judaism) serves as Deputy Health Minister, and is de facto health minister, although declining to take that position.

Ze’ev Elkin (Likud) is Minister of Immigration, and of Strategic Affairs.

Yariv Levin (Likud) is Minister of Public Security and of Tourism.

Gilad Erdan, second on the Likud list, had hoped for the Ministry of Public Security and was actually offered the position.  But what he sought was the position of Minister of Interior along with this – as is done in many places around the world, with the official in charge of interior affairs also in charge of the police.  When Netanyahu declined Erdan’s request, Erdan decided not to join the government.  I learned today that Levin has said that if Erdan ever changes his mind, he will step down from Public Security.

Haim Katz (Likud) is Minister of Welfare and Social Services.

Gila Gamliel (Likud) is Minister of Senior Citizens and of Gender Equality.

Ophir Akunis (Likud) is Minister-without-Portfolio in the Communications Ministry (perhaps a de facto minister of Communications).

Miri Regev (Likud) is Minister of Culture and Sport.

Ayelet Sheked is Minister of Justice.

Uri Ariel (Habayit Hayehudi) is Minister of Agriculture and Rural Development.  There has been considerable discussion here regarding what “rural development” means.  It is my understanding that responsibilities that were expected to fall to Ariel, with regard to Judea and Samaria, are reportedly being retained by Yaalon.

Yoav Galant (Kulanu) is Minister of Construction.  There is a policy linkage here between Finance and Construction, both under the auspices of Kulanu.

Aryeh Deri (Chair, Shas) is Minister of the Economy and of the Development of the Negev and Galilee.

David Azoulay (Shas) is Minister of Religious Services.  It pains me (and many others) that this ministry did not fall under the auspices of Habayit Hayehudi.

This line up has some considerable promise, if only those to the right who have been given major positions will be allowed to act with full authority.

Briefly, here, in terms of what our government is facing: there is the growing embrace of the Palestinian Authority, and increasing pressure in Europe regarding the need for Israel to return to the negotiating table (which will, of course, bring “peace”).

Much has been made of the fact that just days ago Pope Francis, in a meeting with Abbas, called him an “angel of peace.” Apparently this was incorrectly reported, as what the pope said was that Abbas “could be” and angel of peace.  That is, if he had the will and made some hard decisions.

But the focus most clearly was on the Palestinian Authority and on the possibilities for “peace.”

What is more, the Pope has recognized “Palestine” as a state and the Vatican has forged this recognition in a new treaty: Vatican diplomatic relations will now be with the “state” rather than with the PLO.

Not a move that pleased Israel.

Add to this yet another Obama interview with Jeffrey Goldberg in the Atlantic in which the president declares that he has no intention of “rubber-stamping” Israeli government policies.  He is ready to speak out about certain policies, you see, because he loves Israel so much. (I hope you have not eaten immediately before reading this.) He knows what’s good for Israel, it seems, better than the Israeli electorate does.  For example, he understands the wisdom of speaking out about settlement policy.

And then there is the 18-month plan for peace negotiations that France is currently promoting.  At the end of 18 months, if there is no “peace,” then France will recognize the “state of Palestine.”

This, my friends, simply touches the surface of what’s ahead for us here in Israel.

What I see is that Netanyahu, as is his M.O., will play the game, declaring that he is for a “two state solution.” But he will continue to insist (and this is fact the reality) that the chaos in the region and security concerns make it impossible for Israel to pull back from any territory.  This doesn’t touch the heart of the matter – our rights to the land – but I believe this is how he intends to frame the situation.  It is less confrontational.

I am not comfortable with this approach – preferring to speak about our Legal Grounds ( http://israelrights.com .  Making our case is something that it is increasingly important to do.  But I think we have to remain mindful of the incredible pressure our prime minister faces on a daily basis.

It is worth noting that the PA has already objected to Shalom as negotiator for Israel, as he doesn’t believe in a “two state solution.”

To all who will be observing Shavuot – which marks the receiving of the Torah – I wish Chag Sameach!