Before we get to the events that are stomach-turning, I want to circle back just briefly to Netanyahu’s talk in Congress.  I cannot consider every commentary (and there are so many!), but what Charles Krauthammer wrote seems worthy of note here.  He refers to “the libel being perpetrated by some that Netanyahu is trying to get America to go to war with Iran,” which he says is a “malicious calumny.”

This is a point that I had not touched upon, and so I am glad to have the opportunity to do so here.  Krauthammer’s response (emphasis added):

“In its near-70 year history, Israel has never once asked America to fight for it. Not in 1948 when 650,000 Jews faced 40 million Arabs. Not in 1967 when Israel was being encircled and strangled by three Arab armies. Not in 1973 when Israel was on the brink of destruction. Not in the three Gaza wars or the two Lebanon wars.

“Compare that to a very partial list of nations for which America has fought and for which so many Americans have fallen: Kuwait, Iraq, Afghanistan, Somalia, Vietnam, Korea, and every West European country beginning with France (twice).

“Change the deal, strengthen the sanctions, give Israel a free hand.” 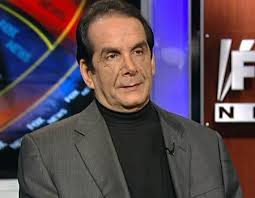 As to that free hand, I would add that the US possesses 15-ton bunker busters and the B2 stealth bombers that can carry them, the use of which would complete the job in Iran, but will not give them to Israel.

Krauthammer makes yet another point, however:

“Netanyahu offered a different path in his clear, bold and often moving address, Churchillian in its appeal to resist appeasement.”

It is appeasement that leads to war, not tough stances.  Thus, in fact, what Netanyahu proposes would reduce the threat of war with Iran, for it would render the mullahs weak instead of emboldening them.

There are reports of the deal with Iran drawing close.  This article from yesterday, for example, refers to the fact that “Secretary of State John Kerry wrapped up a week of diplomacy in Europe and the Middle East within what many experts say is striking distance of an initial accord with Iran over its nuclear program.”

But the very same article reports that French foreign minister Laurent Fabius “complained that the emerging accord did not yet go far enough to constrain Iran’s nuclear capabilities.

“’There has been progress but as far as the volume, checks and duration of the envisaged commitments are concerned, the situation is still insufficient,’ Mr. Fabius said Friday. ‘So there is more work to be done.’”

Kerry then rushed to give the appearance of unity with France and declared that they were chasing after the same thing.

With regard to this matter, what we need to watch for are indications that Netanyahu’s speech may have affected the negotiating dynamic.  The prime minister is now saying that:

“After my speech to Congress, we heard from several foreign ministers who don’t see a need to reach a deal as soon as possible, and who said they would wait for a good agreement to be reached. (emphasis added)

“I hope these things will be translated into action.”

On the homefront in the US, according to the WSJ (all emphasis added):

“the Senate’s effort to require a vote of Congress on the Obama Administration’s impending nuclear-arms deal with Iran is back on track. With support for the Iran bill now approaching a veto-proof majority, the Administration’s negotiators must now factor in Senate approval for the terms of any deal.

“Last Friday Tennessee’s Senator Bob Corker , Chairman of the Foreign Relations Committee, introduced the Iran Nuclear Agreement Review Act of 2015. The bill says President Obama must submit the text of any final Iran arms deal to Congress within 60 days to allow time for hearings and a vote.

“After Israeli Prime Minister Benjamin Netanyahu ’s speech to Congress Tuesday, Senate Majority Leader Mitch McConnell announced he would bring the Corker-Menendez bill directly to the floor next week for a vote, bypassing the normal committee markup procedures. An outcry erupted among Democrats…

“Add this group to the Senate’s Republicans and there currently are 64 Senators, three short of a veto-proof majority, who want to vote on the Obama Iran deal.”

Not surprisingly, Obama is responding to all this pushback: Now he says that the US will “walk away” if the deal is not acceptable.

I am guessing that he sees it as preferable to give the appearance of having exhibited necessary caution, than to attempt to push through a deal and be defeated – humiliatingly for him – by a veto over-ride in Congress or have other members of P5 + 1 refuse to go along.  You will notice that his tone is decidedly less belligerent and more tentative.

And so, on this, stay tuned.

Now as to what is “nauseating.”  Actually, I’m seeing a lot that is, and I bet many readers would agree. But what I have in mind is the election campaign here in Israel.  It has demoralized me, along with a host of others.

I imagine that at my core I am naïve  I actually believe that the good of the nation must come first, and not the opportunity to advance oneself in an election.  And so, what I have been seeing has been unbearable for me.

For a good part of the campaign, the thrust of what is being called the “Zionist Camp” – aka the Labor Party, headed by Buji Herzog and Tzipi Livni – has focused on the goal of “anyone but Bibi” rather than a positive agenda.  In the course of promoting that goal, charges emanated from the left that were vile for their petty and insipid focus.  The “biggie” was the charge that Sara Netanyahu returned bottles from drinks that had been purchased with State funds (for some official entertaining, presumably) and pocketed the refund monies.  Shock.  Horrors.  THIS is what there was to talk about when the world is on fire?  Turns out that the charges weren’t true, but this seems almost beside the point.

Because of my naiveté – or, better perhaps, my idealism – I also think there are times when it is essential to support the head of the government, even if it means that your own chances of replacing him are thus diminished.  I absolutely believe it was Buji’s place – criticize as he might such other things as housing policy – to state that he stands with Bibi with regard to his talk in Congress, stands with him as one on the issue of Iran, and is proud that the prime minister of Israel would be received as he was.

But no, Buji was big on criticizing Bibi for his “rift” with Obama, and suggested that it was wrong for him to leave the country when there is so much here to tend to (just as he, Buji, was busy attending to “things”).

Heaven forbid that either Buji or Livni should suggest that Prime Minister. Netanyahu did a good thing in Washington, and just perhaps made Israel a bit safer.  Never mind that he enhanced Israel’s prestige internationally.

Yesterday, there was a left wing rally in Tel Aviv – officially run by a “two-state” group, and not any party – that was solidly “anyone but Bibi.”  Likud has charged that it was funded by foreign money.  Key speaker was former head of the Mossad Meir Dagan, who has tilted quite left.  According to a JPost report, he said that ‘Our leadership is scarier than our enemies.” While Iran is very scary, the way Netanyahu has handled matters has hurt efforts to stop Iran’s nuclear armament program.

A couple from Tel Aviv who attended the rally is quoted as saying that among the things Netanyahu failed at was “diplomacy.”

Now really.  Is the relationship with Obama the key? Did they not see how Congress responded to him?  Have they not heard that Arab Sunni states support our prime minister? Arab states.

The charge, also made at this rally, that Bibi has failed because he has not negotiated a “two state solution,” thereby ushering in “peace,” is a huge red herring.  Even many of those who would prefer to see a Palestinian state admit that it is not a possibility now and would cause great security damage to Israel.

But why bother with the truth, when it’s possible to attack Netanyahu?

On Friday, the left-leaning newspaper Yediot Aharonot published a document that it said was a list of “drastic concessions” that Netanyahu had been willing to make in August of 2013, in the course of negotiations with the PA. These concessions allegedly included such things as a deal on Jerusalem and full “restitution” to the Palestinian Arabs of land secured in 1967.

Prime Minister Netanyahu countered that this was a draft, floated by the US: In an attempt to jumpstart negotiations, the Americans had floated a document to which each side could then respond. Netanyahu never agreed to withdrawal to the pre-1967 line nor to dividing Jerusalem, nor to some concession on Palestinian Arab “right of return.”

Dennis Ross, who served as an American negotiator at the time in question, says exactly the same thing: Netanyahu never agreed to any of these terms.

Yesterday, Defense Minister Bogie Ya’alon said that since neither side agreed to the terms of that document that had been floated by the US, the document was “not relevant.”

What then, asked Ya’alon, was Yediot’s intention in publishing this document now?  The answer is obvious: to create an impression that Netanyahu was prepared to make huge concessions, thus discrediting him with the very voters upon whom he depends.

Likud has charged that Yedioth Ahronoth publisher Noni Mozes has orchestrated a campaign to mislead the public.

So here we have a newspaper – if that is what we call it – more interested in the “Bibi must go” campaign than in reporting facts.

This too, my friends, I find nauseating.