Following her meetings with Israeli officials, Secretary Clinton yesterday went to Ramallah to meet with PA officials. Before I turn to the news that came out of that meeting, I share this small — but not insignificant — item from Arutz Sheva:

“Her trip to Ramallah was protected by anti-terrorism checkpoints – of the same type that the US opposes when they are put up for the protection of Jews in the area.

“At least two special checkpoints were established for the Clinton visit…One of the checkpoints prevents Arabs from entering the Jerusalem-Beit El-Shilo highway (Route 60) from the village of Hizme, near Jerusalem’s Pisgat Ze’ev neighborhood. The other checkpoint is located near Ofrah, preventing Arabs from traveling south towards Jerusalem on the same highway.”

The next time the US demands we reduce checkpoints as a gesture of “confidence” in the PA, remember this, which is both an acknowledgement that Arabs on the road can create a danger and an admission of how little Jewish lives matter where politics are concerned.

When Clinton was in Jerusalem, all was cordial and easy, according to reports from Netanyahu aides. Then she went to Ramallah, where Abbas cried to her about how the Israelis weren’t nice to his people. (“Mommy, mommy, she hit me.”) The goal is to get the US to come down hard on us.

The issue at hand was the projected demolition in eastern Jerusalem of 143 Arab homes (not 143 free-standing houses, but a small number of residential buildings each containing multiple apartments). Clinton commented that “this kind of activity is unhelpful and not in keeping with the obligations entered into under the road map.” She said she would raise this issue with both the government of Israel and the Jerusalem Municipality.

But let’s take a closer look at what’s going on:

The mayor of Jerusalem, Nir Barkat, has called the information provided to Clinton a “disinformation campaign and a cynical exploitation” of Clinton’s visit. Bravo for our new mayor!

When building is being done without proper permits, and the builder ignores an order to stop building, this doesn’t mean the bulldozers are called out immediately: a precise legal procedure follows. It is mandatory under the law to issue a demolition order if there is no possibility, even retroactively, of issuing a building permit for the structure under consideration.

Often residents of a neighborhood are made to suffer because of the illegal construction, as it takes place at the expense of land designated for public use. or blocks the construction of needed infrastructure (e.g., new sewer lines or widening of a street).

The law is being applied equally to houses constructed by Jews and Arabs — it is not directed at Arabs. Since January, 11 demolitions have been carried out in western Jerusalem and 17 in eastern Jerusalem.

What is new, in fact, is this evenhanded approach, as previous administrations, tip-toeing around the political ramifications of taking down buildings being constructed by Arabs, turned a blind eye to Arab illegal building and demolished only illegally-built Jewish homes. (Such is the perversity of being governed by individuals so timid or politically correct that they don’t know how to represent Jewish rights.)

Mayor Nir Barkat has made it clear that while upholding the law without bias, he intends to continue to promote investments in infrastructure, construction, and education in eastern Jerusalem

It should be noted that those buildings scheduled for demolition are empty — no one was actually going to lose his or home because of this. Was Clinton told this?

Hatem Abdul Qader, the PA official in charge of Jerusalem affairs, has commented that “It’s an open demographic war,” and I’m glad he raised this issue. In 2003, lawyer Justice Reid Weiner produced a monograph for the Jerusalem Center for Public Affairs on “Illegal Construction in Jerusalem.”

In this report he noted two major causes of the illegal Arab building in Jerusalem (neither cause having anything to do with poor Arab families who don’t have adequate housing). One cause is the desire of builders to turn a quick profit illicitly.

The other, which merits careful note, is the “Widespread non-compliance subsidized by the Palestinian Authority.” This is the demographic war. “…tens (or perhaps even hundreds) of millions of dollars have been raised and expended to advance the political objectives of the Palestinian leadership via subsidizing and encouraging massive illegal construction in the Arab sector of Jerusalem.”

Faisal Husseini, who had the Jerusalem portfolio in 1997, was quoted as saying, “[t]he Palestinian program is to create a Palestinian belt…[t]he most important Palestinian challenge is building, even without permits.”

CNN cited a Palestinian demographer, Khalid Tufakji, who said, “Maybe we lose ten houses, but in the end we build 40 more…”

The PA’s governor of the Jerusalem District, in 2000, is cited as saying, “Any Arab who builds in Jerusalem has accomplished a national act of the highest order…[the aim being] the Arabization of Jerusalem.”

This is a story that has not been told. Perhaps now, please G-d, we will have officials in place to tell it, and to counter the highly politicized whining of the PA. There are thousands of illegally built structures standing in eastern Jerusalem.

But let’s go even further than this and look at what that moribund document the Road Map for Peace actually says about this issue:

“The Government of Israel [will take] no actions undermining trust including…demolition of Palestinian homes and property, as a punitive measure or to facilitate Israeli construction…”

What the Jerusalem Municipality is doing, even-handedly carrying out the law, does not apply.

TERROR ATTACK: This is the third time in less than a year that a piece of heavy construction machinery has been used to attack Israelis on the Jerusalem streets. This time it was a front loader driven by a Palestinian man on Menachem Begin Blvd. in the Malha section of Jerusalem, near Teddy Stadium. He lifted up a police car and flipped it over twice, while its occupants hung on; he then dragged it along the street. The two police officers within were lightly injured.

The terrorist was shot by police called to the scene and taken to the hospital; he later died of his wounds. An open Koran was found in the cab of the front-loader. 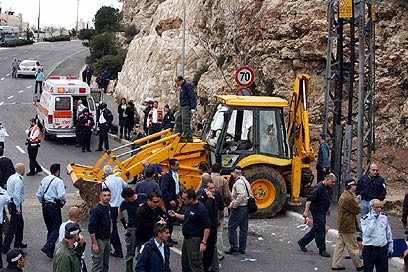 The terrorist was seen in the front-loader headed towards a bus, but he was deterred from reaching it by an electrical post. The bus was full of girls in Purim costumes, on their way to Hadassah Ein Kerem hospital, to cheer up patients. Many were in shock from the sight of the huge piece of machinery headed towards them for what they imagined to be their certain death. Baruch Hashem, they escaped uninjured.

The terrorist, who was carrying a Palestinian ID, has been identified as Mir’i Radeideh, 26, of the Beit Hanina neighborhood that falls within the municipal boundaries of Jerusalem. He was married and a father of one.

Hamas has praised the attack.

I have begun to perceive with some certainty that we have a real winner in our new Jerusalem mayor. He speaks with strength and forthrightness for our interests.

In response to the terror attack he said: “I expect to hear the whole world condemn terror attacks in Jerusalem, that try to harm…Jerusalem’s strength and innocent people. (This said, of course, with sarcasm.)

“I expect the government to cooperate with the Jerusalem Municipality to increase penalties for such attacks.”

As to the above, what is likely to be pushed are speedy demolitions of the houses in Jerusalem of families of terrorists — something that is long discussed and not often done. And if Hillary is displeased with this, my thought is that we should let her be displeased.

This is good news: Italian Foreign Minister, Franco Frattini, has informed Tzipi Livni that his nation will not be taking part in Durban 2. We need a number of other western nations to follow.

Also encouraging: Congresswoman Shelley Berkley (D-1st NV) has drafted a petition to Secretary Clinton, to be circulated in Congress, demanding that none of the $900 million pledged by the US go to the Palestinians until Gilad Shalit is released and the rocket launchings stop.

Contact your Congresspersons to urge support for this, please. To locate your representative in Congress:

Since the announcement by Clinton of the $600 million in funds to go to the PA (the other $300 million to be used for immediate humanitarian relief in Gaza), the PA has announced it is providing bonuses of 800 shekels to be added this month to the allowances of “security” prisoners in Israeli prisons.

“According to Palestinian law, every Palestinian prisoner, Arab or Israeli Arab, imprisoned in an Israeli jail, is entitled to financial assistance from the Palestinian Authority, on condition he (or she) was sentenced for activity connected to the ‘struggle against the Israeli occupation.’ During his entire prison stay every prisoner is entitled to a salary which ranges from 1,000 shekels/month for serving a term of one to five years, to 4,000 shekels/month for serving a term of more than 25 years. Furthermore, married prisoners receive an additional 3,000 shekels a month, 50 shekels for every child, and 300 shekels for prisoners living in the Jerusalem area. In addition, every prisoners receives an allotment directly to his prison commissary account and 800 shekels a year to buy clothes.”

How many are aware of this? When you multiply this by the more than 4,500 Palestinian security prisoners we are holding, it amounts to a very tidy sum that the PA dispenses annually, taken from donations intended for PA development. People wonder where the money goes.

The stipulation in this instance, for the bonuses, is that it is to go prisoners belonging to terrorist organizations that are members of the PLO, and excepting Hamas and Palestinian Islamic Jihad prisoners. This is causing a great deal of anger in Hamas, which says this is proof that the PA is not working towards unity.

There is now deemed to be sufficient evidence to indict PM Olmert with regard to yet another incident, being called the Investment Center Affair: When Uri Messer, Olmert’s former legal partner and close associate, represented a silica factory that was appealing for assistance from the Investment Center of the Ministry of Industry, Trade and Labor, Olmert, who was then heading that ministry, didn’t absent himself from the decision-making process due to conflict of interest. Instead, he involved himself in a process that led to $15 million being granted to the factory to build a facility in Dimona.

The indictment, for which police say they have sufficient evidence, would be for fraud and breach of trust.

Is anyone besides me wondering how come these indictments are just surfacing now, when Olmert is almost done with his position as PM?