This is certainly not what those of us who voted right expected, when we saw that the right wing/nationalist parties had garnered 65 mandates. We expected, silly us, a right wing/nationalist government. Especially was this the case when Netanyahu argued that he should be given the first opportunity to form a coalition because the right wing had the majority of the mandates even if Kadima had one more mandate than Likud.

But now a new centrist political configuration is a done deal.

How we came to this place is complex, and there are many theories as to what motivated Netanyahu.

What it has seemed from my vantage point is that he was insecure with the prospect of a narrow right wing coalition that might buck him at any moment; he wanted long-term stability. I saw on the right purist positions that left no room for political compromise. National Union expressed doubts about joining the coalition. Just yesterday UTJ expressed reluctance to join because of concessions made to Lieberman with regard to conversion process that they found objectionable.

But there is more. There are those who say that the right is not Netanyahu’s natural home anyway, and that it was to be expected that he would gravitate center.

And those who theorize that with the difficult times facing us, Netanyahu understood that we needed as broad a coalition as possible with which to face the world — so that everyone saw we were of one mind. Think Iran, in particular. There is, potentially, some sense to this. When we hit Iran, as well we may, no one would be able to say this was done because of right-wing crazies; not with a left-wing defense minister.

And those who believe that Netanyahu wanted a left wing party in his government so that it would be more palatable to the world, which was already growing faintly hysterical with charges that we were going to have an “anti-peace” government of radicals. This makes less than no sense to me, as we are not going to please the world anyway, and certainly shouldn’t form our governments based on what we think others would like. That is not the way for a self-secure, proud nation to behave.

He is saying that he will be a full partner in the government; certainly the two men came to some private understandings. How it plays out will remain to be seen, however. Will Barak advance a position with Netanyahu as his prime minister that is significantly different from the one he advanced when Olmert was in that position?

Today, in an effort to convince the Labor Central Committee that they should vote to enter the coalition, Barak assured those assembled that he would be the opposition inside the government. By this he meant that he would not allow Labor to be swallowed up by Likud positions. But I could not help but wonder what people in Likud thought of this statement.

Netanyahu and Barak both wanted this so badly that their teams negotiated through the night. But the fact is that there are very real ideological differences between the two parties that had to be somehow papered over. It makes me wonder whether this can be stable.

At the end of the day, it may be that the deal Labor was offered just seemed too good to turn down.

The process as it unfolded was this: Netanyahu and Barak met privately and came to some understandings. Barak — over many objections from within his party — then appointed a negotiating committee to hammer out a coalition agreement with Likud. They worked through the night to achieve this, as they started far apart.

When they were done, what they had included this:

Labor will have five portfolios — Defense; Industry, Trade and Labor; Agriculture; Welfare; and Social Services; and one minister without portfolio in charge of minority affairs. It would also get the deputy defense minister, and one Labor member would head each one of the statutory Knesset committees – Education, Absorption and the Foreign Affairs and Defense Committee – for a third of a tenure and not simultaneously.

With all of this, Barak and not Netanyahu will decide who in Labor receives each post.

It was agreed that the new government would “work toward the formation of a comprehensive regional arrangement for peace and for economic cooperation in the Middle East.” It also stipulates that “Israel would be committed to all national and international agreements that were signed by former Israeli governments.”

This is not as straightforward as it sounds. It is, rather, slippery language that permits a good deal of latitude. It says nothing about a Palestinian state or a “two-state solution.” What does it mean to “work toward” an arrangement for peace and economic cooperation?

I would point out here that “agreements signed by former Israeli governments” refers to several Oslo agreements only, although people may be assuming more is involved. Nothing was signed with regard to the Road Map, and there has been no signing coming out of Annapolis. This coalition agreement does not commit us to continuing Annapolis.

But there is more: The government would work toward achieving peace agreements with all of its neighbors and the defense minister would be a full partner in the peace process and a member of any limited forum for decision-making in the diplomatic, security and economic fields. The government would operate to enforce the law in the illegal outposts as well as in illegal Palestinian constructions.

Peace process? This is not sounding good, and leads to worry about what concessions may be coming down the road. But, again, it is vague. No talk about dividing Jerusalem or pulling people out of Judea and Samaria. Very vague, very deliberately.

And there is still more, within the economic realm:

The government would secure within 30 days of its inauguration…an emergency economic plan for dealing with the financial crisis, solutions for reducing number of laid off workers, solutions for the credit crunch as well as initiatives for stimulating economic growth.

The government would act to restrict the Economic Arrangements Law and would allocate budgets for infrastructural projects and for establishing research and development centers.

Barak brought this to the Labor Central Committee that convened today, and a very divisive and heated debate ensued.

There were 1,071 party members in attendance at the convention; 58 percent voted in favor of joining the coalition, and 42% voted against it – – this was a margin of 173 votes.

Labor’s 13 mandates, added to the 53 mandates from Likud, Shas and Yisrael Beitenu combined, brings the coalition to 66 mandates. Netanyahu now has his absolute majority and a government. It remains to be seen whether any of the right wing parties — National Union, UTJ or HaBayit Hayehudi still join; this seems unlikely.

It should be noted that Labor is a distinct minority, with its 13 mandates, within this government, which is precisely what made many in Labor nervous.

When Lieberman signed his coalition agreement with Likud, there was a clause specifying that there would be changes if either Labor or Kadima joined.

The police who operated in Umm al-Fahm today are to be roundly congratulated!

“This morning, 2,500 policemen went in to ensure the existence of the democratic process in the State of Israel.

“This was a legitimate protest that was approved by the court and the police, and the police force proved it is strong and capable of allowing such demonstrations to take place anywhere in the State of Israel.”

This sounds good, it feels good.

It took 2,500 policemen because violence was anticipated. The violence came from rioting Israeli Arabs who had gathered, and the police, not the Jews who were demonstrating, took the hit. Fifteen police officers were lightly injured today, primarily by rock-throwers.

One was Deputy Police Commissioner Shahar Ayalon. “This is part of the price we in the police have to pay to uphold the Supreme Court’s order as we promised,” he said.

The police used tear gas and a water cannon to quell the rioters; 12 riot suspects were arrested and will be prosecuted.

The demonstration took all of half an hour this morning, but the rioting continued past that time. The route of the march was within municipal boundaries but did not go into the center of the city and avoided residential areas. Jews who carry private guns had surrendered them willingly to police before the demonstration began; organizers made the point of saying they came “armed only with the flag.” 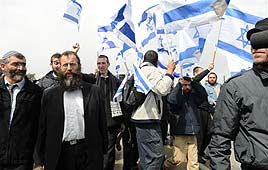 Arabs demonstrated at a major intersection of the city, waving flags of the Israeli Islamic Movement and the Palestinian Authority. (Please note this well.)

MK Afou Agbaria (Hadash) who lives in the city, demanded that those who were arrested be released at once. “The racists that came here to provoke should be prosecuted,” he said. “The police are using an iron fist against residents of the city for their courageous stance.”

An Arab MK who thinks rioting and throwing stones at police represents a courageous stand. The epithet “racist” thrown at Jews who march as proud Israelis. This speaks volumes.