On Friday, Danny Gonen, 25, had gone with his friend, Netanel Hadad, for a dip in the Ein Buvin spring near Dolev (a village in the Binyamin Regional Council of the Shomron, north east of Jerusalem).  They were returning when their car was flagged down by an Arab.  When they stopped, he shot into the car 10 times.  Gonen was killed and Hadad was injured. 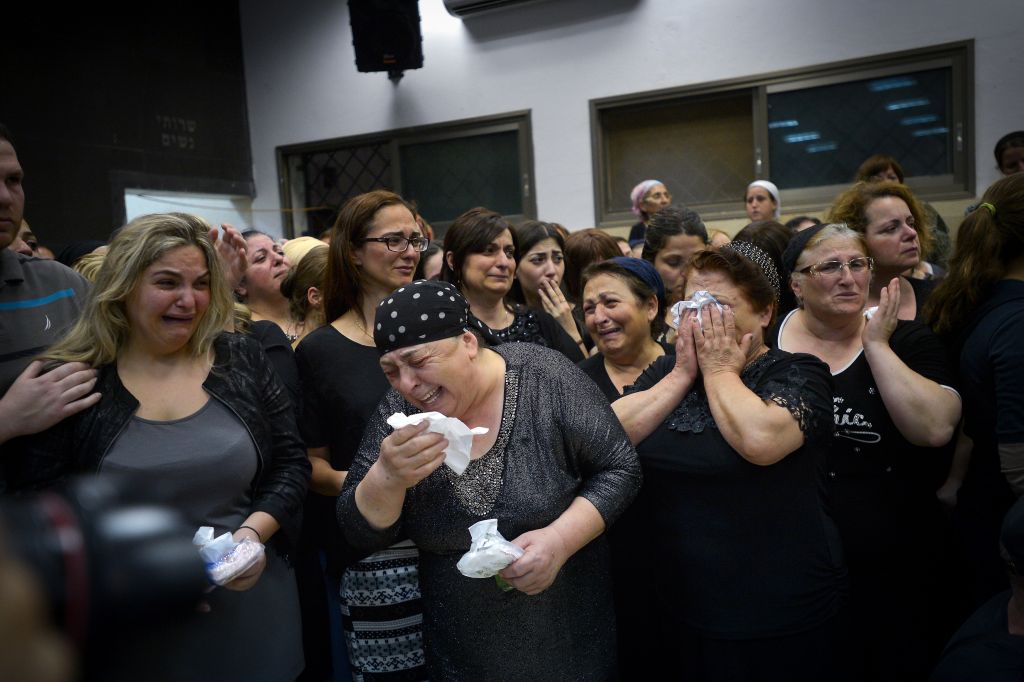 Gonen, who was buried today in his hometown of Lod, near Tel Aviv, was described as a pillar of strength to his widowed mother and four younger siblings.

How much pain, how many times?

Does world news carry this?  A rhetorical question.

An IDF search of the area was initiated immediately.  But by last night that attempt to find the assailant was abandoned.  The case has been turned over to the Shin Bet, who is initiating inquiries of a different sort, relying on intelligence.  It is troublesome that he has not been located yet, but he will be found.

Reports indicated that the assailant was thought to have acted on his own.  However, a group that calls itself the “Marwan Kawasme and Amer Abu Aysha Squad” has claimed responsibility.  Affiliated with Hamas, the squad is named for the two terrorists who killed three Israeli teenagers last summer.

French Foreign Minister Laurent Fabius was in town today. After having met with Abbas in Ramallah, he came to Jerusalem to meet with Netanyahu.

The French have been itching to play a role in “the peace process,” and have been talking about bringing a resolution to the Security Council to push negotiations with a deadline attached.  Just one more meddler.

I suspect an assessment made recently by Shoshana Bryen with regard to this was very much on the mark:

“Sometimes, if you smash two stories together, you end up with something interesting; sometimes you get something worrisome. This is one of the latter.

“The first story is about France, a member of the P5+1 negotiating a deal with Iran on nuclear capabilities. The French government has expressed increasing concern that the emerging deal is flawed — perhaps fatally…

“The French position creates a problem for President Obama because the deal has to be agreed to by the P5+1, not the ‘P4+1-with-one-vote-in-opposition’…

“The second story is also about France. With historic ties to the Middle East, but extremely limited military capabilities there (or anywhere), France is trying to be a diplomatic power broker….

“Influence can come from arms sales, and here the French excel…

“Influence also comes from diplomacy — and this is where the stories begin to collide.
“France, Britain and Germany had drafted a UN Security Council Resolution late last year to set parameters for establishing a Palestinian State and ‘ending the conflict.’ It was not submitted because of the impending Israeli election. France is prepared to try now with a draft that would ‘solve’ the problem by using the 1949 Armistice Line as a reference point for a Palestinian state with a shared capital in Jerusalem, a “fair” solution for refugees, and possible land swaps. It would also require that the Palestinians recognize Israel as a “Jewish State”…

“In early May, President Obama indicated that he intended to veto the French proposal…

“However, the President appears to have moved toward the French position…

“Smash the two stories together, you get an American president supporting France in its efforts to be a major player in the Middle East in exchange for French support of the P5+1 deal with Iran.

“In both cases, Israel pays the price.” (Emphasis added)

Prior to the arrival of the French foreign minister today, Netanyahu’s line sounded tough:

“Prime Minister Benjamin Netanyahu said Sunday he would ‘fiercely reject’ any international proposals meant to bring about a unilateral solution to the conflict with the Palestinians against Israel’s will.

“…international proposals suggested to us, in essence they’re trying to force upon us, have no true consideration for the security needs of Israelis or other national interests of ours.”

Sigh, yes, I know.  He is still only talking about “security” and not about rights.  But his message was intended to suggest a rejection of international (UN) coercion.

Then there was a press conference with Fabius and Netanyahu, and it was a veritable love fest.  Necessary diplomatic babble most of which is without import.  Fabius indicated that everyone was very friendly and that both sides have indicated a desire to return to the negotiating table.  Right…

But Netanyahu for his part, did a bit of a segue:

Pointing out that France had been Israel’s closest ally in the years following the creation of the Jewish State, he said, “We will never forget the vital support you gave us during those difficult times.”

And then he continued:  “I believe France has an important role today as well. We urge the country to stand beside us to prevent a bad deal with Iran that will pave the way for attaining nuclear weapons.”

I return to the Obama/Iran issue.  Naturally.  Since I last wrote…

We have an article by Eli Lake and Josh Rogin in Bloomberg: “No, U.S. Doesn’t Have ‘Absolute Knowledge’ on Iran’s Nukes,” in direct response to Kerry’s claim of “absolute knowledge.”

From a news agency in Iran:

”The Islamic Republic of Iran will not allow foreigners’ access to the country’s military centers under the pretext of inspection of nuclear sites, a senior Iranian military commander underscored.”

While on a different note we have charges by Congressman Louie Gohmert (R-TX) that the Obama administration had “outed” an active Israeli spy mission in Iran. Israel, Obama said, had infiltrated Israeli spies into mainland Iran via cargo boats. The administration, said Gohmert, has also disclosed the possible use of Azerbaijani airspace by Israel.

According to US law, the State Department was required to file a report on human rights violations in Iran (which are horrific) by February 25.  But that report has yet to be filed.

Charged Senator Ted Cruz (R-TX), “it appears that both President Obama and Secretary of State (John) Kerry are trying to sweep under the rug Iran’s horrific human rights record because, presumably, acknowledging that fact would be inconvenient.” (Translation: make Iran angry)