For supporters of Israel, it was exceedingly difficult to read the news that the Israeli government has reversed itself with regard to restrictions on items going through land crossings into Gaza.  Now all civilian goods will be permitted through, with only weapons and “war supporting materiel” being blocked.  Being cute, one government representative announced, “Yes to coriander, no to Kassams.”

This decision was made by the Septet, or (inner) Security Cabinet.

The most difficult part of the announcement concerned the fact that it was made with the cooperation of Tony Blair, envoy to the Middle East for the Quartet.  Blair, it was said, vetted the announcement.  As if we have surrendered our sovereignty (have we?) and require the approval of the Quartet for what we do.

Before we come to that conclusion, I’d like to take a closer look.  The situation is extremely tense and complex:

The original restrictions on what went into Gaza had a dual purpose.  One, most definitely, was keeping weapons and materiel that could be used in making weapons and bunkers for weapons (fertilizer, concrete, etc.) out of the hands of Hamas.

The other, however, was to weaken Hamas, which is an illegitimate terrorist entity at our border, by restricting certain items. Thus, in the main, what went through the crossings were basic goods that filled humanitarian needs: medicines, basic foods, fuels, etc.  Sufficient quantities of these items went in so there truly was not the humanitarian crisis we have been charged with creating.  All in all, close to a ton of goods per person was permitted into Gaza between the end of Cast Lead, our military operation in late 2008 and early 2009, and recent weeks.

Other specialty items went in as well.  I’ve written about this over time: Glass to repair windows before winter, salt for operating water purifiers, large numbers of cattle to be slaughtered prior to a holiday, etc.

But luxury items, such as gourmet foods or high-end furniture — which would serve primarily the Hamas people who had generous funds at their disposal — and certain commercial items — which would increase the money those same Hamas people had — were not permitted in.  It is not true that no commercial items went in.  Certain basic items for those in need went in via humanitarian, or NGO, groups.  World Food Bank, UN, etc.  But the PA (yes, you read this correctly) also coordinated the needs of commercial vendors, supplying lists of what they required to supply the market.

Now all commercial and luxury items will be let in, with the noted weapons-related exceptions.

What this means is that the Security Cabinet has given up on trying to weaken Hamas via this method.  There is no question but that this action will strengthen Hamas — both in terms of goods and financial gain, and in prestige because this will be touted as a moral victory over Israel.

The charge is going to be made, I have no doubt, that if we could do this now we could have done this all along and that we were hurting the people of Gaza unnecessarily or arbitrarily.  I hope that what I’ve written here makes it clear that this is not the case.  We had very specific goals in mind with regard to weakening Hamas, and those were legitimate goals.

What has happened is that the goals, or the strategy, has shifted.

The question, then, is why the shift.  It is related directly and most obviously to the entire flotilla situation — a situation that is hardly resolved.

Since the takeover of Gaza by Hamas, we have maintained a sea blockade of Gaza.  This is legal according to international law, and a legitimate way to defend ourselves.  We are at war with Hamas, which fires missiles and rockets at our civilian population.  A key way to bring in those missiles and rockets would be via the Mediterranean.

Anyone who doubts that this is a viable means of bringing in weapons, along with and actually more effective than the use of tunnels between Gaza and the Sinai, need only recall the Karine-A weapons ship the IDF captured in 2002.  That ship was carrying weapons for the PA, which then controlled Gaza.  But consider what it was carrying:  $100 million in arms, including rockets, missiles, anti-tank mines, 700,000 rounds of small arms ammunition, etc.

We have no intention of allowing a Karine-A type vessel to successfully make it to the shores of Gaza.  In fact, neither do we intend to allow smaller quantities of weaponry (more sophisticated than what was available in 2002) to be smuggled in the holds of ships that reach Gaza.

Actually, I suspect that it is necessary to stop ships bound for Gaza while out in international waters (it’s legal).  For we have the lessons of the Karine-A:  Its weaponry was packed in waterproof containers, so that the military equipment could be thrown overboard and then picked up, piecemeal, by small fishing vessels.

For all the recent ballyhoo about bringing humanitarian aid, the purpose of the flotilla was clearly to break the Israeli siege of Gaza.  Were that to happen, the Israeli population would be at greater risk, because it is certain that weapons would then be brought to the coastline.

Those attempting to aid Hamas played it smart however, charging that insufficient quantities of humanitarian aid were permitted by Israel via land crossings, so that it was necessary to bring additional aid via sea.  (The Turkish ship, the Mamara, if you remember, carried humanitarian supplies — but supplies that were essentially worthless, such as expired medications.)

These charges muddied the waters (forgive the pun) and made Israel’s task more difficult.  There was a greater cry against Israel’s action because of some suspicion — on the part of those who weren’t simply blatantly anti-Israel and rejoicing at the opportunity to lambaste us — that maybe there really was a need to bring in additional humanitarian supplies and Israel was being intransigent.

What the Security Cabinet has done, with its decision, is to make the issues more clearly black and white.  If everything except weaponry and military materiel can go into Gaza via land, without limit, there can no longer be a claim that the ships are needed to bring in humanitarian aid.  Those on the ships are unmasked in their intentions.

In making this decision, then the Security Cabinet is giving the absolute security need to maintain the sea blockade priority over the desire to weaken Hamas in terms of commerce and access to goods.

Consider now what Blair has said:

“Let me state right at the outset that Israel has the complete right to protect its security and to keep arms out of Gaza.”

This is a gambit, a gamble, but the hope, the expectation, is that we will now find more support for our sea blockade within the international community. 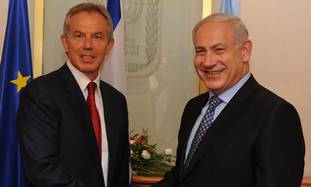 So, is this decision a surrender of sovereignty on the part of Israel, or a clever way to shift strategy and turn the tables on those supporting Hamas?

What is certain is that we are going to need whatever support we can garner in the days and weeks ahead with regard to our right to stop ships from reaching Gaza’s coast.

The government of Lebanon has given the go-ahead for a ship to sail from Tripoli, stop in Cyprus, and then head for Gaza.  The “activists” on board this ship are all female — the group’s leader called this a “new secret weapon,” because Israel won’t fire on women.  The French-registered ship is called the Julia, but this particular voyage is dubbed the Mariam.  It is going to Cyprus first in an effort to circumvent violation of SC Resolution 1701, which calls for a cessation of hostilities between Lebanon and Israel.  (This does mean they are anticipating hostilities, does it not?)

The organizer of this venture is Yasser Kashlak, a Syrian of Palestinian origin who heads the Free Palestine Movement.  A movement to “free Palestine” is not exactly about humanitarian aid to Gaza; it is suspected that there is a connection between this group and Hezbollah.  The ship is said to be carrying humanitarian aid, but it’s not clear what rationale will be presented for its mission in light of Israel’s new policy.

Following this, we may still have to deal with ships from Iran and perhaps elsewhere.

The other day I shared a short video of Congressman Mike Pence asking the president, “Whose side are you on?”  Now I ask the same of UNRWA, but my question is purely rhetorical.

Christopher Gunness, UNRWA spokesman, has told Reuters that, “We need to have the blockade fully lifted.”

UNRWA’s concern is that the rebuilding of Gaza, following Cast Lead, is difficult because of Israel’s restrictions on building materials.  Rest assured, Gunness is not concerned that sending in unmonitored quantities of metal, concrete, etc. might lead to materials falling into the hands of Hamas, which would use it in manufacturing weapons, launching pads, underground bunkers and the like.

He registered no satisfaction about the fact that Israel has said that there are plans to meet with international agencies in the next few days to discuss advancing such projects as the construction of schools and hospitals.  The fact remains that there has to be careful monitoring of what goes in and how materials will be used.  And so, Gunness grouses that, “The Israeli strategy is to make the international community talk about a bag of cement here, a project there. We need full unfettered access through all the crossings.”