A new two-day round of “negotiations” with Iran regarding its nuclear capacity began today in Moscow.  A Russian media source refers to this as a “round table discussion,” which tells us more than a little.  “Russia hopes that it will help restore trust between Iran and the West.”

Iranian National Security Council Secretary Saeed Jalili heads the team representing Iran.  Catherine Ashton, foreign affairs head for the EU, leads the delegation of six nations facing off against Iran: Russia, the UK, China, the US, France, and Germany (the permanent members of the Security Council plus Germany).

As of late today, there was discontent expressed by a member of the Iranian negotiating team: “So far the atmosphere is not positive. Setting up the framework [for negotiations] is the main problem.”

Ray Takeyh, a senior fellow at the Council on Foreign Relations, writing in the Washington Post, says (all emphasis added):

“…a subtle shift is emerging in the Islamic Republic’s nuclear calculus. Officials in Tehran increasingly sense that it may be easier to get the bomb through an agreement than by pursuing it outside the parameters of a deal. But for this strategy to succeed, Iran has to get the right kind of an accord, one in which it trades size for transparency. Namely, the deal must allow Iran to construct an elaborate nuclear infrastructure in exchange for conceding to intrusive inspections…

“…they stress that it has to be predicated on the Nuclear Non-Proliferation Treaty. In Iran’s telling, the treaty grants it the right to construct an extensive nuclear apparatus featuring a vast enrichment capacity. In exchange for such a presumption, Tehran is willing to concede to inspection of its facilities…

“…such an agreement may yet prove Iran’s most suitable path to the bomb.

“As Iran’s nuclear facilities grow in scope and sophistication, the possibility of diverting material from them increases regardless of the parameters of an inspection regime…”

“…the Iranians have managed to steadily increase their enrichment of uranium and are now raising their production of a concentrated form close to bomb grade.

“…The enrichment is a point of enormous pride to Iranians and a high card in an escalating game of brinkmanship that might one day turn deadly.

“…as any Iranian diplomat will tell you, the Nuclear Nonproliferation Treaty sets no limits on enrichment purity. It simply bars nations from turning their civilian efforts to military ends — and Iran insists it is preparing uranium to fuel only reactors, not bombs.

“…its supplies of concentrated uranium are rising fast, a trend that could eventually slash the time needed to produce a small nuclear arsenal.

“‘[The non-proliferation treaty] allows nations to get to the red line of weaponization,’ said Yousaf M. Butt, a nuclear physicist with the Federation of American Scientists…

Ray Takeyh, an Iran specialist at the Council on Foreign Relations, said a crisis never erupted because the Iranians made their moves so gradually. The international community, he noted, ‘gets acclimated.’

“Today, the immediate goal of negotiators…is to get Iran to halt its 20 percent production — a far cry from the original demand for zero enrichment. Iranians boast that their intransigence has given their atomic manufacturing a sense of inexorability and legitimacy.

“…As if tensions weren’t high enough, experts say that Tehran might raise the stakes further by re-enriching some of its growing supply of 20 percent uranium to even higher levels of purity.”

What are the chances that the six parties facing off against Iran will come away declaring that they’ve struck an agreement, while Iran, moving covertly to weapon development, has the last laugh?

This farce, taking place in full view of the world, is possible because of what?  Are those six nations obtuse to the point of stupidity, or uncaring about the consequences, or?

Just recently, in an interview with a German newspaper, Netanyahu said, “The P5+1 are so keen on getting any agreement that they have lowered the demands.”

“[The international community must] make its demands crystal clear and tied to a timeline for implementation, ratchet up the economic and diplomatic pressure, and augment that pressure by making clear that there is a credible military option.

Senators Robert Menendez (D-NJ) and Roy Blunt (R-MO) expressing similar thinking, have organized a bipartisan letter to Obama, signed by 44 senators, advising him that if there is not concrete progress in negotiations with Iran he should quit the negotiations:

“It is past time for the Iranians to take the concrete steps that would reassure the world that their nuclear program is, as they claim, exclusively peaceful. Absent these steps, we must conclude that Tehran is using the talks as a cover to buy time as it continues to advance toward nuclear weapons capability.”

One-hundred-twenty-three illegal immigrants from South Sudan, who had been rounded up by authorities, were sent home to Juba by plane today, and a second plane is due to depart next week. 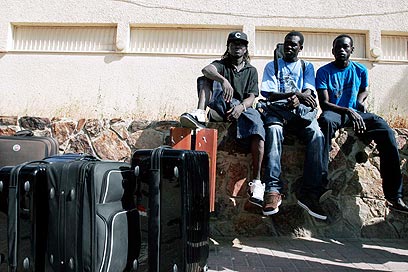 This has the feel of a symbolic or political action by Interior Minister Eli Yishai (Shas).  For, out of roughly 80,000 illegal Africans in the country (I’ve also seen figures of 60,000 and 100,000), there are only some 700 or so South Sudanese in Israel.  If every last one is sent home — which is likely to be the case — this will have scarcely made a dent in the problem.

Of course, one reason Yishai started with South Sudanese is because the Israeli courts have deemed it safe to send them home.  There are 30,000 Eritreans here and 15,000 people from north Sudan, and moving them out will be considerably more problematic because we have no relations with a volatile Sudan, and conditions in Eritrea — where there have just been charges of torture coming from the UN — suggest that returnees might not be safe there either.  Then it becomes a question of where they might be sent — what other countries, possibly in Europe, might take them.  Yishai is saying in time they will all leave.

Even if they were all gone, according to the numbers I’m seeing, there still might be 25,000 to 35,000 or more illegal Africans remaining.  I have no information  on who they are or how they might be handled.

Activists who work with the South Sudanese — who went voluntarily, but were not all exactly happy to be going home — are distressed and claim that this action by Israel will destroy the important relationship we have with the new African state.  But I’m not seeing this.

Netanyahu has pledged that repatriation would be done with dignity for all. Each returnee was provided with cash ($1,300 per adult/$500 per child), and given vaccinations.  And they were joined on their flight by members of a South Sudanese delegation that has come here to help oversee the operation.

Clement T. Dominic, the South Sudanese official heading the delegation, said the migrants would receive “a good package that will allow these people to get reintegrated when they come back to South Sudan.”

What is more, Dominic, reiterating an earlier commitment, said South Sudan would be setting up its embassy in Jerusalem, not Tel Aviv.  Israel has been enormously helpful to the fledgling state of South Sudan in a number of respects, and there is continued anticipation of assistance with agriculture and a good deal more.  South Sudan’s relationship with Israel simply does not rest solely on the matter of repatriation of a few hundred.

The situation in our south — both at our border with the Sinai and with Gaza — has heated up once again.  Briefly:

The Grad rockets I reported on yesterday, that had come in over Shabbat, were determined to have come from Egypt and not Jordan.

This morning, a member of an Israeli crew working on the fence being constructed on our border with Sinai was killed in the course of an attack coming from Sinai.  Members of the Golani Brigade, who scrambled to the scene, then killed two terrorists responsible.

The IDF Armored Division has been moved closer to the border with the Sinai.

Speculation is that the enormous instability of Egypt at the moment is at the root of attacks emanating from the Sinai.  Unofficial results from the presidential election run-off indicate that Muslim Brotherhood-backed candidate Mohamed Mursi has defeated Ahmed Shafiq, who had served as prime minister under Mubarak.  Mursi has claimed victory while Shafiq has not yet conceded.

But, in spite of promises to turn over control of the country to the newly elected president, the Supreme Council of the Armed Forces (SCAF) has seized additional powers for itself.  The thinking is that the Brotherhood is seeking to foment unrest and undo the peace treaty with Israel.

Subsequent to this, and according to the army unrelated to it, rockets were launched from Gaza — into the Eshkol Regional Council of the Negev; into the Hof Ashkelon Regional Council; and at about 9:00 this evening, into an open area in Sderot. There have been no injuries.

The Air Force has taken out four terrorists in Gaza in the course of two attacks — in one case hitting two of them as they were preparing to launch another rocket.

Islamic Jihad — not Hamas — is believed to be responsible for the rockets from Gaza.

Can these attacks truly be unrelated?  Hamas supporters in Gaza are already cheering the Brotherhood win in Egypt. Undoubtedly a great deal more to follow.