It’s been rather amazing to witness:

The enormous crowds of millions and millions in Tahrir Square and elsewhere in Egypt — some say this was the biggest demonstration in history.  Filled with fury at Morsi and his regime.  Close to 50 people died in the violence that ensued with those demonstrations.

And then, when the army moved in, the way in which the rage turned to cheers of jubilation, partying and the setting off of fireworks.

The will of the people seems clear here (although I qualify this, just as bit, for there are many more millions who were not in the street than the several million who were.)

It took one year for Morsi to be undone.

The claim on the part of the Muslim Brotherhood is that they are victims of an illegal coup that has overturned a democratically elected government.  But the reality is that, while there were elections, once Morsi was in office, he moved to strengthen the Brotherhood in all aspects of the government — ignoring urgent needs of the nation and establishing a very repressive regime.  It was repressive with regard to political enemies, but most specifically and horrendously so with regard to the Coptic Christians.

To refer to what went on in the Morsi administration as “democratic” would be stretching it more than a bit.

At present, the UN and the international community more broadly are shying away from use of the term “coup,” which implies illegitimacy.  For it seems clear that what has taken place is what the people want.

What must be watched carefully is what will happen with regard to funding of Egypt, primarily by the US, but also by other nations and the EU.  The country is on the brink of financial collapse.

Morsi — who is being held in a military compound along with key Brotherhood leaders — was overthrown yesterday after he refused military demands that he share power.  He made statements about preferring to die rather than compromise when he had been democratically elected.

Countering this, senior armed forces commanders took an oath:.
“We swear to God that we will sacrifice our blood for Egypt and its people against all terrorists, extremists and the ignorant,”

That’s quite an oath.  The military means business.

Defense Minister and military chief General Abdel Fattah al-Sisi — who led the oath — announced that the constitution that had been passed by Morsi’s Islamist allies in December would be frozen for up to 12 months, giving time for a new one to be drawn up and passed by referendum.  This constitutional change is slated to take place before presidential and parliamentary elections are held. Presumably, the constitution will govern the form of those elections.  Precisely who will draft this new constitution is not clear.

In any event, presidential elections will be held earlier than had been scheduled under the Morsi regime; in the interim, the head of the Supreme Constitutional Court, Adly al-Mansour, will lead the nation, joined by a military figure.

Al-Mansour had just been sworn in as head of the Supreme Constitutional Court days before al-Sisi appointed him.  He is a virtual political unknown, although, according to Israel Hayom, former Shin Bet chief Avi Dichter said Mansour was “Mubarak’s man in Saudi Arabia.”

When al-Sisi made his announcement on state television, opposition leader Mohamed ElBaradei (pictured below) sat with him.  Elbaradei, an attorney, was IAEA Director General from 1997 to 2009.

Also present were Dr. Ahmed el-Tayeb, Grand Imam of al-Azhar (Sunni Islam’s highest seat of learning), and Coptic Pope Tawadros II.  Their presence was designed to demonstrate civilian support for the military action.  But it also set a new tone in terms of non-Islamist participation — and most dramatically with regard to the Coptic Church.

The Egyptian street is quiet now and the army is clearly in control.  It has deployed wherever there was concern about unrest. This refers mainly to Brotherhood strongholds, but includes, for example, the border between the Sinai and Gaza (to preclude Hamas infiltration and involvement), 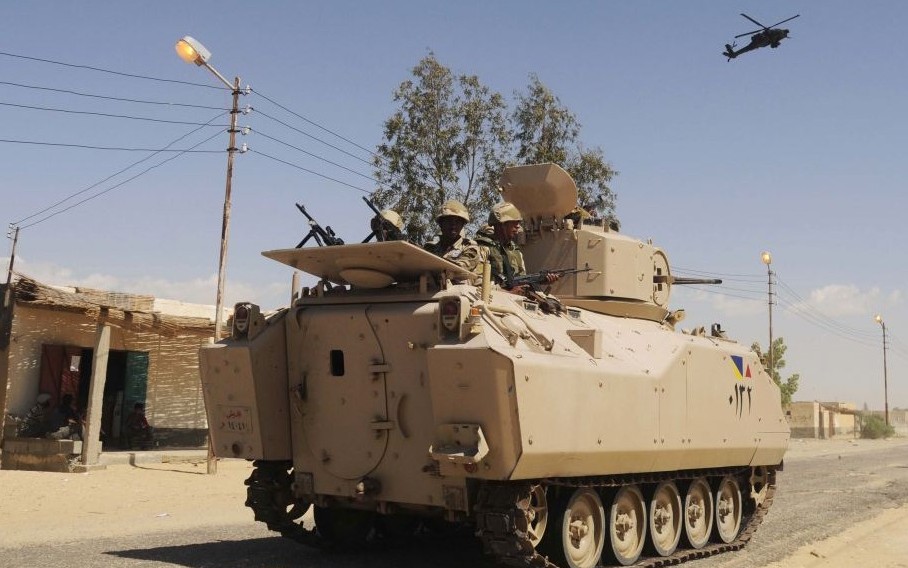 The Brotherhood is down.  The question is whether they are out.  To hear them tell it, they are not. It remains to be seen.

Properly, Israel, while watching the situation very closely as it unfolds, is making no comment about what is happening in Egypt.  That does not mean there are no opinions in the government, of course.

As Israel Hayom explained it:

From where I sit, the current situation offers the possibility of a considerable improvement over the Brotherhood regime.  I’m delighted to see its failure.

The military tilts in a more westward direction and is far more likely to honor the peace treaty with Israel. What is more, this should cut Brotherhood support for Hamas, have an effect on what goes on in the Sinai (with regard to controlling terrorist elements there), and possibly have a dampening effect on Brotherhood efforts in other places.  (Some are already speaking about the domino effect of the Brotherhood coming down in Egypt, but I think it’s too soon for such presumptions.)

AlBaradei’s name is being advanced as a candidate for president down the road.  The man was a headache when he headed the IAEA, and he certainly is no friend to Israel.  But neither is he Muslim Brotherhood — sworn to Israel’s destruction and a world-wide caliphate.

Another name being bandied about is that of Amr Moussa. who served as secretary general of the Arab League. Definitely not a friend of Israel.

The point is that we’re not going to see crowds dancing in Tahrir Square with Israeli flags any time soon.  We’ll have to take what we can get.  Mubarak was not a great lover of Israel either, but we were able to reach an accommodation with him.

A major issue that remains to be played out is whether the military will step back enough to allow for some genuine democratic process, or if it will revert to the control that constituted Egypt from Nasser through Mubarak.  Mubarak’s regime was a repressive military regime; he went down when the army abandoned him.

The benefit to the nation right now of such a military regime, with all of its negative aspects, is that it can confer stability.  One of the greatest worries in Egypt now is the specter of on-going chaos, which would render the country literally ungovernable.  As it is already on the verge of bankruptcy, only strong management can bring it around.  A situation in which millions of people are without enough to eat is unthinkable, but it must be thought.

It is in this sense that the possibility of destabilization by the Brotherhood is particularly worrisome.

One thing can be said with reasonable certainty:  Although his situation is not exactly good, we can assume that Mubarak had a good laugh yesterday.

“Delight is easy to explain. What appears to have been the largest political demonstration in history uprooted the arrogant Islamists of Egypt who ruled with near-total disregard for anything other than consolidating their own power. Islamism, the drive to apply a medieval Islamic law and the only vibrant radical utopian movement in the world today, experienced an unprecedented repudiation. Egyptians showed an inspiring spirit.

“If it took 18 days to overthrow Hosni Mubarak in 2011, just four were needed to overthrow Morsi this past week…

“My worry is more complex. The historical record shows that the thrall of radical utopianism endures until calamity sets in…

“In the case of Islamism, this…process has already begun…

“In short, my joy at Morsi’s departure is more than offset by my concern that the lessons of his misrule will not be learned….”

And then, Dan Margalit, writing about “Obama’s hope of a moderate brotherhood dashed” (emphasis added):

“…The United States is celebrating 237 years of independence on Thursday. That the downfall of the Muslim Brotherhood took place on this day is charged with symbolism. U.S. President Barack Obama has actively contributed to the mirage of Egyptian democracy under the Muslim Brotherhood that has developed in the wake of his Cairo Address in 2009, after which he abandoned his ally, former President Hosni Mubarak.

“Obama threw his support behind Morsi, dismissing reports that his election was rigged, because he believed the Muslim Brotherhood’s voice was the voice of the Egyptian street.

“Obama was convinced that there were moderates in the Muslim Brotherhood. He envisioned a Turkish-style democracy emerging in Egypt, only to discover that Turkey’s Prime Minister Recep Tayyip Erdogan was constantly obstructing the American bandwagon’s path…

“The Muslim Brotherhood’s failure was inevitable; it had nothing meaningful to offer to the tens of millions of starved, unemployed Egyptians or those who, despite their academic backgrounds, are now aimlessly wandering the streets.

From this I can segue into my closing comments.  Yes, how strange…fireworks in Egypt and fireworks in America.

I am well aware that today is the Fourth of July.  I am, after all, an American by birth and breeding.  I have long been proud of what the America I knew has stood for.  It remains part of who I am.

Of course, I wish all my American readers a Happy Fourth.

And yet…yet…I also grieve. Because the America I knew — and what it stood for — seems to be no more. This has been a very frightening thing for me — and for many of you who write and tell me what you see in America.

I have documented — and will continue to document — the changes in my postings and I know that my distress is palpable.

And so, today, on the Fourth, my prayer is that America will find herself before it is too late.

The pictures below of the Egyptian street of a few days ago were not seen in mainstream media sources. But they should be seen by all Americans.  They might provide a wake-up call: 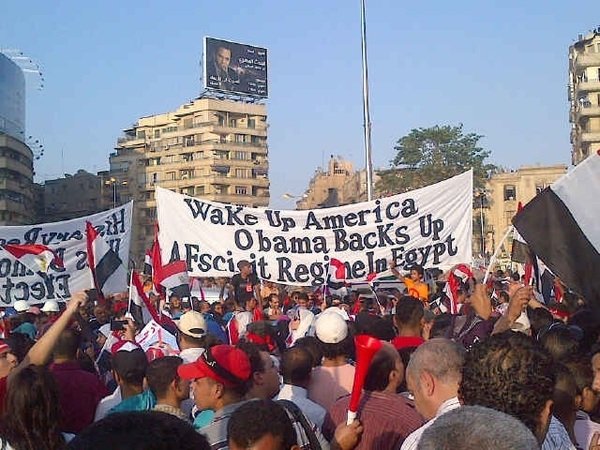 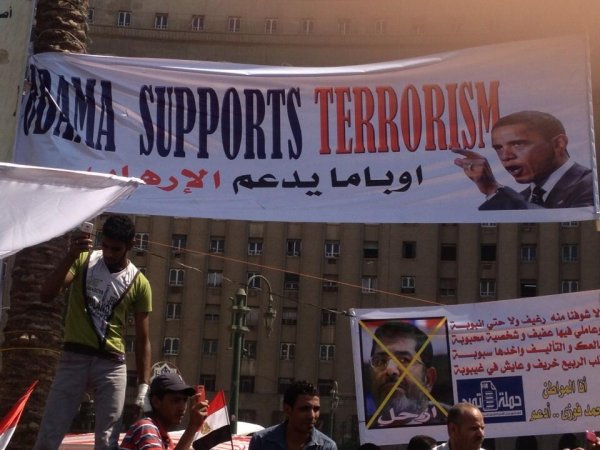