I ended  yesterday’s post with good news and hoped to begin today’s the same way.  But it is not to be:

A shuttle bus at the Sarafovo Airport in the city of Burgas, in Bulgaria, has been hit by a terrorist — it is believed, a suicide bomber.  An explosion tore the bus apart, at about 5:30 PM, killing at least seven Israelis and wounding more than 20.  A local Bulgarian tour guide and the bus driver may have been among the casualties. 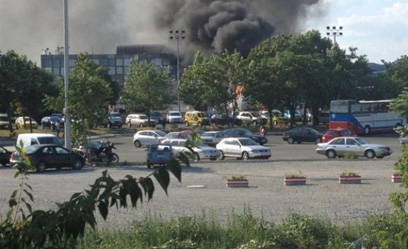 This was one of three buses at a terminal in the airport that were picking up Israeli tourists who had just arrived; according to an eye witness, the bus blew almost immediately after the tourists, roughly 40 in number, had boarded.

There had been no intelligence about the possibility of such an attack.  But now Israeli security officials, having consulted on the situation, are warning of the possibility of additional attacks on Israeli targets elsewhere in the region of the Mediterranean.
~~~~~~~~~~

The Israeli Foreign Ministry is sending in a team of experts, including members of ZAKA, to work with local authorities in dealing with this situation.  The Israeli Embassy in Sofia is preparing to assist, as well.  The dead must be identified, and arrangements will be made to send those who were either injured or unharmed back to Israel as quickly as possible.

Burgas is about 400 kilometers east of the Bulgarian capital, Sophia; situated on the Black Sea, it is a popular summer destination for Israelis.

“We know what targets and tactics the Iranians use.  We are acquainted with the way they are arrayed and their wide infrastructure, and unfortunately we are also aware of their determination to carry out murderous attacks against Israeli targets.”

It is not considered an accident that today is the 18th anniversary of the attack on the Jewish community center (AMIA) in Buenos Aires, Argentina, that killed 85 and wounded hundreds — an attack perpetrated by Iran and Hezbollah.

In this regard, it is suspected that Hezbollah is involved today as well.

It’s too early to speak definitively, but I’m picking up tentative reports about a lukewarm level of cooperation by Bulgarian officials.  One eye witness report indicated that Burgas rescue teams were tardy in arriving after the explosion.

Our intelligence has been excellent of late, and we’ve managed time and time again to hold those Iranian bastards at bay.

But this time… Damn, damn, damn. Attacks on buses evoke especially strong responses in many Israelis.

Please Heaven, tomorrow I will have more news, including all the good things I had hoped to write today.