Former prime minister of Israel Yitzhak Shamir passed away yesterday at the age of 96. 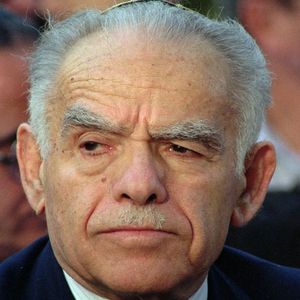 A feisty man of few words who held on to his fiercely nationalist, Zionist convictions, he was noted for his integrity, his humility and his courage.

David Bedein, in a tribute to Shamir, recalls this from an interview:

“So I asked Shamir:

“How did you stand up to the pressure of the Reagan Plan of 1982 which demanded Israeli withdrawal to the 1967 lines, with only cosmetic changes?

“And to the pressures from James Baker in 1991?

“And then, after a few more answers in this regard, he… said, very simply, that ‘When we said no, they understood no'”

I salute the memory of this man in a time when our leaders have forgotten how to say no.  There will be a state funeral for him tomorrow (after the arrival of relatives from abroad).

You can read more about Shamir’s life here:

Will the real Binyamin Netanyahu stand up?

At the Cabinet meeting this morning, the prime minister briefly eulogized Shamir.  Invoking Shamir’s statement that, “The Arabs are the same Arabs and the sea is the same sea” — which meant that the Arabs don’t change any more than the sea does — he went on to say that today, “there are certainly many more people who understand that this man saw and understood fundamental truths.”

Late last week, word had come out — first from PA sources and then from Israeli news sources — that Israeli Vice Prime Minister Shaul Mofaz would be meeting PA President Mahmoud Abbas today.  PA negotiator Saeb Erekat, at the time of the announcement, was very quick to clarify that this meeting did not constitute resumption of negotiations.

Well, there will be no meeting today; it is said to have been “postponed indefinitely.”  Rumors in certain quarters had it that Netanyahu intervened.  But it is exceedingly likely that the cancellation came from Abbas.

The PA’s Maan news agency cited a Fatah official as saying the meeting was called off in part because of “public disapproval of the meeting under the current circumstances. [Abbas] respects the views of the public that has expressed its opposition…”

The “public disapproval” had to be pretty strong to have affected Abbas’s decision.  And here is where it gets interesting:

Mofaz had intended to tell Abbas that the chances for successful negotiations were better now that he and his Kadima party were part of the government.  In other words, Abbas can trust him to move ahead as Netanyahu would not.

But what seems to be the case is that Mofaz is a great deal less trusted than Netanyahu on the Palestinian Arab street.  Mofaz is a military man.  Most significantly, he was IDF Chief of Staff during the “Second Intifada,” during which he responded with tough tactics: keeping Arafat isolated, doing house demolitions, and waging strong military offensives against terrorists in the course of the highly effective Operation Defensive Shield.

Hundreds of people had posted Facebook messages opposed to Abbas meeting with the man who had caused so many Palestinian Arab deaths.  According to reports cited by Israelnationalnews, “A protest was held outside of Abbas’ office on Friday by activists who said that they had urged the PA’s attorney general to arrest Mofaz for ‘war crimes.'”

Ah, the ironies of life.  This is not turning out the way Mofaz, who has morphed from a military man into a peacenik of sorts, had envisioned it.  Seems he’s not going to be the savior of the “peace process” after all.  And this was a prime motive of his for joining the coalition in the first place.

One report I picked up said that members of Mofaz’s camp had accused Netanyahu of pressuring Abbas to cancel the meeting.  This is a rather convoluted scenario that has been soundly rejected by Netanyahu’s people.  This is one sign, among many, of the growing ill will between Mofaz and Netanyahu.

As Aaron Lerner of IMRA puts it: “The spin attempted by people associated with Mofaz to claim that Netanyahu was somehow associated with the cancellation of the meeting is a bad sign for the future role of Mofaz in the coalition.”  For all the photo ops of the two men smiling that we saw when Kadima joined the coalition, it is best to remember that Netanyahu, as smooth a politician as exists, soundly calls the shots.

The major bone of contention between the two has to do with a replacement for the Tal Law, which granted military exemptions to ultra-Orthodox (haredim) studying in yeshivas and which has been shot down by the court as unconstitutional.  A committee — the Plesner Committee — has been tasked with drafting new legislation on this issue.  Mofaz is supporting a version of the law that would include personal legal sanctions again haredim who don’t serve.  Netanyahu, seeking to avoid “a social flare up,” wants the clause on sanctions dropped.

The committee has said it will not submit recommendations for a new law without the approval of the prime minister — because otherwise the sanctions would be “unenforceable.”

Mofaz is furious. According to his associates, cited in YNet, he has said  Kadima won’t stay in the government “at any cost.”

“We joined this government for very specific reasons, with [the replacement for] the Tal Law prime among them,” they said. “If the prime minister fails to go with us on this issue – he won’t go with us on other issues as well.”

And why is it, pray tell, that they assumed that Netanyahu would be on board with everything they support?

A meeting between Netanyahu and Mofaz on Friday on this issue did not go well. They were scheduled to meet again today.  The committee is supposed to submit its recommendations by the end of the week.

The entire issue of who serves, who is drafted, is exceedingly hot within Israeli society.  Among the proposals floating now is one that would require that only a percentage of haredim be drafted, with the rest doing non-military national service.

(Then there is the issue of whether Israeli Arabs should also be required to serve the nation — either in the military or via national service; currently there is no such requirement although they definitely can volunteer.  Netanyahu has come out in favor of this.)

Haaretz — certainly the most leftist of Israeli papers — today is running an interview with Brig. Gen. (res.) Yehuda Duvdevani, the founder of Nahal Haredi, a battalion for the ultra-Orthodox to serve (yes, some do now).  He provides a perspective that is important:

“It would be a disaster for the Jewish people for the Haredim to go back into their holes because we aren’t giving them opportunities to move forward. We must not create antagonism.

“I told the committee: At least remember not to look at this with hate in your eyes. ‘You are going to do mediation and you have start from a place of discussion and mutual respect, not criticism and the media.’ It all fell on deaf ears..

“I’ve been in this for 14 years. The Haredi world has opened up in the past three or four years, and we must not close that door due to misunderstanding or harsh rhetoric.”

When General Duvdevani talks about opening up of the haredi world, he is referring, almost certainly, to the fact that the economic situation has shifted so that more ultra-Orthodox men are leaving the yeshivas (where they receive what are essentially stipends to study) and going out into the work world.  This has an enormous effect on their outlook over time and their sense of being part of the larger society.

There are those whose sons are on the front line risking their lives for the nation who deeply, and very understandably, resent the haredim exemptions from serving.  Some young haredi men avoid draft by staying hidden in the yeshivas; some do not identify as part of the larger body politic.  But others in the yeshivas truly believe that their study of holy texts and their prayers protect the soldiers and that they are also serving the country.  This is an enormously contentious issue that can split the country.

A change is over-due, but, in my opinion, that change must be a process and not a strong-arm procedure, which is pretty much what Mofaz is opting for.  Remember, the status quo has been in place since the founding of the State.

(A note of clarification: we are speaking here of ultra-Orthodox, not the national religious, who do serve with tremendous pride and courage.)

The Palestinian Authority is up to its old tricks, with regard to the UN.

Last October, UNESCO voted to accept “Palestine” as a full member, even though it is not a UN member.  A blatantly political move if ever there was one.  But as a member of UNESCO, “Palestine” has full rights within its various bodies, such as the World Heritage Committee.

And so, the PA submitted the Church of the Nativity in Bethlehem for recognition as a World Heritage site listed under “Palestine.”

In a secret ballot of the Committee on Friday in St. Petersburg, Russia, the PA proposal was accepted.  The Church is now a World Heritage site in “Palestine.”  This was a first, which sent the leaders of the PA into a state of jubilation.

“This gives hope and confidence to our people in the inevitable victory of our just cause,” exulted PA Prime Minster Salam Fayyad.

The vote is ludicrous on several counts — even aside from the fact that there is no “Palestine.”

As a statement from Netanyahu’s office noted, “The world needs to remember that the Church of the Nativity, which is sacred to Christianity, has been desecrated in the past by Palestinian terrorists.”
For more on this, see: http://old.nationalreview.com/comment/comment-cohen042402.asp

More broadly, securing a Christian site in Bethlehem as “Palestinian” is a travesty on all that is reasonable — for the Muslims of the PA have driven the Christians out of Bethlehem. See:  http://www.nypost.com/p/news/opinion/opedcolumnists/bethlehem_exodus_jH6iVNuarsPLBceXPzHO6I

What makes this decision even more blatantly political is the fact that both the technical advisory body and the secretariat of the World Heritage Committee had advised the Committee, before its vote, that the PA’s application did not meet necessary criteria.

In order to meet a cut-off date for registration, the PA had filed under an “emergency procedure,”  claiming that the site was in “danger” because of Israel’s occupation of the area and required urgent repairs.  But the technical advisory body said there was no emergency; what I’m reading is that the Church’s roof leaks.

The fact that the reports to the World Heritage Committee were straight had brought a modicum of encouragement that the Committee itself might reject the PA proposal. But it wasn’t to be.

Yesterday, in the wake of the cancellation of the meeting between Mofaz and Abbas, the PLO announced that its Executive Committee had voted to issue a call for an emergency meeting of the Security Council on the subject of “settlement” activity in Judea and Samaria on land that the Palestinians seek for a state; they are seeking a resolution demanding that building be stopped.

A PA statement from Ramallah said:

“The rise in settlement activities in Jerusalem, the expropriation of land and the displacement of residents from their homes are proof of a dangerous Israeli government plan to undermine the two-states solution.”

Would President Obama, as he faces the election, dare not veto such a move in the Security Council?