I begin here with a correction:  When I last shared news of the electoral campaign, I mentioned irregularities in the Likud primary. And I spoke about the fact that one candidate demanded a recount and came close to securing a reasonable slot on the list as a result.  This was Tzipi Hotovely, pictured below.  My brain was not working when I wrote, however, and I typed “Tzipi Livni” instead. Many readers caught this.  I appreciate it, because it means my readers are paying attention.  But I also appreciate that just about every single reader who wrote to me indicated that he/she knew it was an error and that I meant Hotovely. 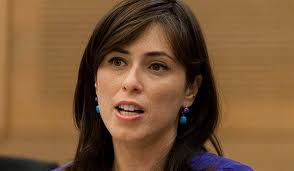 And then a tribute to a very special lady, Joan Peters Caro, who passed away yesterday. Joan was a courageous journalist, devoted to truth, who wrote “From Time Immemorial,” which documented poorly understood facts about the Jewish and Arab demography in the land in the years prior to and right after the founding of the modern State of Israel.  Scrupulously researched, it is considered an indispensable resource by many who care about Israel as the Jewish state.

Coming back to Tzipi Livni just briefly…Arutz Sheva says she claimed yesterday that she and Herzog would make Israel “popular” again – something she maintains Netanyahu could not do.

This position, which I find deplorable, goes a long way to demonstrating what is wrong with the left.

It is several years ago, when she was foreign minister, that she gave a talk at a conference I attended.  She explained that we “had to” give away Judea and Samaria in order to make the world happy, as this was important.  I got up and walked out.  Would do the same today, of course.

Our positions must be based on what is best for us, and we must stand up strongly for our rights, whether this makes the world “happy” or not.

What is more, her claim that Netanyahu is responsible for the “increasing isolation” that Israel is enduring is just plain wrong.  The UN and the EU are horrendously one-sided, but around the world we are forging new relationships with some states, and strengthening our relationships with others. Read about our growing ties with India, for example, or Japan. And the very quiet cooperation with the more moderate Arab states (something that would have been impossible not so long ago). We are not increasingly isolated.

On the other hand, I was not exactly ecstatic about a statement made by Netanyahu on Tuesday, either:

He says he is still in favor of a “two-state” solution, as he espoused it in his Bar Ilan speech of 2009, but the Palestinian Arabs have rendered this impossible:

“I don’t think withdrawing settlers is practical at the moment.”
http://www.jpost.com/Israel-Elections/Netanyahu-says-unlikely-settlements-will-be-dismantled-if-elected-to-fourth-term-386887

I know exactly what is happening, as it is fairly obvious on the face of it: Kerry is telling Netanyahu he will support Israel in international forums. But, as the US opposes unilateral actions by the PA because negotiations are the way for the Palestinian Arabs to secure a state, Israel must be willing to consider coming back to the table to negotiate that state.

And so, our prime minister is playing both sides.  Yes, sure I’m for that state, he says for public consumption, but look, the PA has made it impossible for us to proceed.

He’s certainly correct, that the PA has made negotiating impossible. This is what makes the position of leftists who call for us to negotiate a state now so ridiculous. But, it is time for our head of state to say that a Palestinian state is not the way to go, in any event, because of Jewish rights in the land.  He should not be going on record, once again, for that “two state solution.”

United Nations Secretary-General Ban Ki-moon announced on Tuesday that the Palestinian Arabs will formally become a member of the International Criminal Court (ICC) on April 1.  What is more, the court’s registrar said yesterday that jurisdiction would date back to June 13, 2014.

This is something I do not understand: retroactive jurisdiction. Bringing jurisdiction back to the middle of June means possibly giving the PA the opportunity to level charges against Israel for her actions in the Gaza war. (There are still issues regarding jurisdiction of place – as Hamas and not the PA is in control in Gaza.)

Meanwhile, the State Department has declared that the US does not believe Palestine qualifies as a sovereign state and doesn’t recognize it as such and does not believe that it is eligible to accede to the Rome statute.”

International lawyer Alan Baker, writing for the Jerusalem Center for Public Affairs, agrees with the US position.  He says that the Secretary General should have refused to accept the request of the PA because the Rome statute limits membership to states, and explains why “Palestine” is not a sovereign state.

Senator Rand Paul (R-KY) yesterday introduced a bill that would immediately stop all US aid to the PA, until such time as the PA withdrew its application to the ICC. The bill is entitled, “Defend Israel by Defunding Palestinian Foreign Aid Act of 2015.”

Love it!  Let’s see how many Republicans stand up now. The news reports yesterday spoke of the many tens of thousands who crowded the streets in Paris and elsewhere in France, as well as in other countries, showing solidarity with those slain (“Je suis Charlie”).  It is in this report that I found just a little glimmer of hope: out on the streets, not in their homes, staring at the TV and clucking. Is the world just possibly beginning to wake up?

Last I wrote, I spoke of the major snow storm predicted.  I even included a lovely picture of snow falling. But a slight rise in temperatures changed that scenario here in Jerusalem. Chilling to the bone cold, but not cold enough. We had fierce weather, but it was pouring rain, and hail, and sleet. They’re talking about snow for tomorrow.  We’ll see…