Jew-hatred, that is.  Otherwise known as anti-Semitism.  Today it also wears the garb of anti-Zionism. But make no mistake, it is the same hatred.  Don’t believe those who say, “I have nothing against Jews, individually, my quarrel is with the State of Israel.”  To deny Jews the right to self-determination as a people, and to put that State forever on the defensive, is a form of Jew-hatred.

We will not examine here the theories as to why anti-Semitism may wax and wane, but never goes away. There are many, and I have my own ideas.

The issue is important now, first, because today is International Holocaust Remembrance Day (or the day for commemorating the liberation of Auschwitz), so designated, some five years ago, by the UN.  In Israel, the Holocaust (the Shoah) is commemorated in April.

And then, because it is important to note that anti-Semitism — often, but not always, in its garb of anti-Zionism — is increasing.  For a while after the Holocaust it was politically incorrect to say you hated Jews. For some time now, it has become acceptable again in various venues.

What has not been adequately addressed, even amongst many concerned with anti-Semitism more broadly, is that the Muslim/Arab states are probably the greatest purveyors of anti-Semitism today.  (There was a time when I would have been more definitive about this, but with the way Europe is going — see below — I am less certain.)

When I speak about what is and what is not politically correct, I note that in many circles it is not PC to address the virulent anti-Semitism that is endemic in the Palestinian Authority.

This Jew-hatred should come as no surprise.  The Grand Mufti of Jerusalem, Haj Muhammed Amin al-Husseini, was a Nazi collaborator who hoped that German extermination of the Jews would rid Palestine of its Jewish population. Even earlier, in 1929, he had instigated a pogrom against the Jews of Hevron by spreading false rumors about destruction planned by Jews of Al Aksa Mosque (an inciteful charge that is still leveled at us from time to time). When the Arabs went on their murderous rampage, they shouted “Izbah Al-Yahud!” — slaughter the Jews! And then proceeded to do so.

Yasser Arafat was of the al-Husseini family.  It is said that the Mufti was his uncle; what is certain is that he was Arafat’s mentor.  Yasser Arafat was schooled in Jew-hatred and passed it along to his people, not the least of whom was Mahmoud Abbas, a co-founder with Arafat of Fatah.  Abbas did his doctorate, in Russia, on Holocaust denial.

Here I share with my readers something that has stayed with me for years.  Suha was not Arafat’s first wife (Islam permitting more than one wife).  The one he married first was left behind in Algeria when he came here with Oslo.  She was bitter at her abandonment and happy to give an interview to someone from the Washington Post.  She explained how she was his support in the difficult years and worked to cheer him.  When he was very down, she would send a boy to say to Yasser, “Give me a gun, please, so I can go kill Jews.”  And then, she reported, Yasser would cheer up, and pat the boy on the head, and say,”Ah, this is our future.”  Kill Jews, you understand:  Not, fight for our state.  Kill Jews.

According to a report just released by the Jewish Agency’s Coordinating Forum for Countering Anti-Semitism, there has been a dramatic increase in anti-Semitic incidents around the world.  This was especially true in West European countries, which had the highest number of violent anti-Semitic incidents recorded since World War II.  The greatest increase was in France, with Britain second.

More anti-Semitic acts were recorded in the first three months of 2009 than were recorded during all of 2008.  This is felt to be because of Cast Lead, our operation in Gaza. Here is where anti-Israel and anti-Jewish sentiment merge.  We are denied the right of self-defense accorded all other nations. And here is where the manipulations and pronouncements of Palestinian Arabs serve to discredit and libel us.

Not only were there more incidents in 2009, their severity increased, so we also saw such things as the horror of Mumbai, and the killing of a guard at the Holocaust Memorial Museum in Washington DC.

Additionally, we are seeing the return of blood libels of the sort that were common in the Middle Ages.  Back then, it was the charge that Jews killed Christian children to use their blood for making matzo before Pesach.  Now the charge — and this came first from the leading Swedish paper Aftonbladet at the end of last summer — that the IDF kills Palestinian Arabs youth to harvest their organs.

More recently, the Turkish have run a TV series that libels the IDF, with dramatically acted scenes of our soldiers killing old people and kidnapping babies. (Hopefully, I will return to the issue of our relationship with Turkey.)

Anti-Semitism even touched our humanitarian actions in Haiti.  As we all know, the public response to this life-saving operation was incredibly positive, with even media outlets that are routinely biased against Israel, such as CNN, singing our praises. But there were, inevitably, hate-filled blogs, lunatics who cannot be dealt with. Some charged that we did this for self-serving reasons only, to mitigate world opinion with regard to our crimes in Gaza.  As one commentator observed, ours is the only nation in the world that must seek to justify a good deed.

And, yes, there were those who said we were harvesting Haitian organs.

Our right to self-defense in Gaza: We are about to release a response to the Goldstone Report, and I will be returning to this.

On a brighter note, we have this: Even as there is increased anti-Semitism in Western Europe, in Central Europe, in the very areas where there was complicity with the Holocaust 70 years ago, there is a new support for Israel today.

And so, our leaders have gone to Central European states at this time, to “return its embrace.”  Said one senior Israeli diplomat, “We are trying to hug those who hug us.”  While all of the visits are timed to coincide with Holocaust memorial events, they are not simply ceremonial but` are also incorporating meetings with major governmental leaders.

There are five Central European nations that have offered Israel considerable diplomatic support in the EU. Now, three of them are being provided with much appreciated, high-profile visits by our leaders:  Foreign Minister Avigdor Lieberman is in Hungary; Deputy Foreign Minister Danny Ayalon is in Slovakia; and Prime Minister Binyamin Netanyahu is in Poland.  The other two nations that have been supportive are the Czech Republic and Romania.

Today, in Poland, Netanyahu visited Auschwitz, and delivered a talk.  He began in English, and then switched to Hebrew, except for the opening words of the Kaddish prayer (the praise of G-d recited by mourners), which are Aramaic. 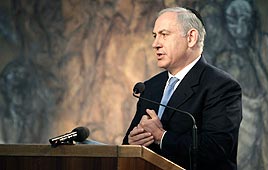 “We will always remember what the Nazi Amalek [Amalek: the tribe in the Torah that hit our people from the rear, seen as a prototype of those who arise in every generation to destroy us] did to us, and we won’t forget to be prepared for the new Amalek, who is making an appearance on the stage of history and once again threatening to destroy the Jews.

“We will not take this lightly and believe that these are empty statements. We will not be calm as if threats and denial of the Holocaust were just blank words. We will never forget and always remember to stand guard.

“We the Jewish people have internalized our lesson well after losing a third of our people, and have learned that the only guarantee for our nation is a strong state and the IDF.

“We have learned that we must warn against new dangers standing at the nations’ gates and we must be prepared to defend ourselves. I vow that we will never help evil to cut our lives short. Never again.”

And so we ask — as the international community fails to address the threat of Iran with seriousness and strength — what is he telling us about our self-defense?  What does he intend, to keep us safe?  All other questions recede in the face of this one.