Would you believe? Yes, I guess many of you would believe this AP report: 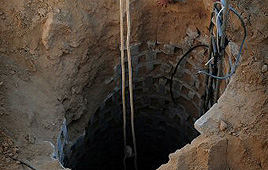 We never said we got all the tunnels, just that we disabled many of them. The question now is how we’re going to respond to this.

First signs are not encouraging. There was some inane comment released regarding the fact that this might happen in coming days, before Egypt has a plan in place.

Amos Gilad, you see, has just met with Egyptian officials to discuss a long term “truce” with Hamas (whatever Hamas will call it in Arabic), stopping the smuggling, and “lifting the siege of Gaza.”

Why is it that my heart is not lifted by this information?

Efraim Inbar and Mordecai Kedar have written a paper for the BESA Center for Strategic Studies, entitled, “Egypt is not going to stop the smuggling into Gaza.”

The summary reads as follows:

“Conventional wisdom posits that Egypt must and will play a central role in halting the smuggling of weapons from Sinai to Gaza. Yet this is unlikely – for strategic, political and Egyptian domestic reasons. Egypt does not mind if Hamas bleeds Israel a little; it gains domestically by indirectly aiding Hamas; gains internationally by playing a mediating role (in a conflict which it helps maintain on a “low flame”); and is incapable of stopping the Sinai Bedouins from continuing as the main weapons smugglers into Gaza. Thus, Israel would be imprudent to rely on Egypt to end the smuggling of weapons into Gaza.”

I have this terribly feeling that we’re about to be imprudent.

I received this paper as an e-mail and cannot provide a URL for it because it’s not yet posted on the BESA website: http://www.biu.ac.il/Besa/perspectives.html . When it does go up, it’s perspective paper #60.

From Haaretz, there is this with regard to smuggling:

“One of the Bedouin in the area insists that the smuggling will continue because they have no other way to earn a living. The Egyptian police operating in the area periodically blow up the Palestinian-built tunnels when they become aware of them, but they reportedly turn a blind eye to Bedouin subterranean smuggling routes.

“One resident of the area claims that Egyptian President Mubarak knows not to mess with the Bedouin in Sinai because he knows that terrorist attacks in recent years at tourist hotels in the Sinai were not the work of Al-Qaida but of Bedouin. He claims that they were sending the Egyptian government a message that Egypt should drop a proposed plan to move Sinai Bedouin away from the border.

The more shtuyote (nonsense) I see now with regard to the aftermath of the war, the less I believe that those who led us into the war (the “triumvirate”) had proper motivation (although the action itself was most proper!) and the more I am inclined to see the political purposes that likely drove them.

For proper motivation during the war should and would lead to strength and resolve now.

Amos Gilad is now reporting on his Cairo meeting to Defense Minister Barak. Reportedly, these are some of the matters that were addressed with regard to preventing weapons from getting into Gaza:

— Sharing intelligence regarding arms en route to the Sinai.

— The means (at least in theory) for stopping smuggling from the Sinai into Gaza. This is the sticky part. Egypt has 750 troops at or near the border and requested that this be increased to 2,000. The Defense Ministry says this isn’t necessary. It is, if truth be told, a question of motivation.

But some defense officials are saying we should let them have it: “If this is what the Egyptians want, then let them have more soldiers. This way, Egypt won’t have any more excuses for why it’s not stopping the smuggling.”

Wonderful. So this will apparently be negotiated.

In addition, there are discussions planned regarding tunnel detection equipment, about which I hope to learn more.

— Ways to create obstacles inside of the Sinai, so weapons never get to the border. There is talk about blocking entrance to the Egyptian Rafah via a barrier around the city and checkpoints (I alluded to this previously), but this addresses the crossing point at Rafah. What confuses me here is how that is supposed to prevent smuggling under the border on either side of Rafah. There is talk of the (remote) possibility of a moat.

Egypt has these various suggestions “under study” but has made it clear that there will be no foreign troops inside of Egypt and no foreign ships patrolling at the coast of the Sinai.

A US foreign policy statement released yesterday declares that “US President Barack Obama will make progress on the Israeli-Palestinian conflict a key diplomatic priority from day one.”

We knew this was coming, but I had secret hopes that he’d be too busy with the economy to pay attention to us. No such luck. The president and the vice president, we’re told “will make a sustained push – working with Israelis and Palestinians – to achieve the goal of two states, a Jewish state in Israel and a Palestinian state, living side by side in peace and security.”

Does this phraseology sound slightly shop-worn? Why, I ponder, does Obama imagine he can accomplish this when everyone else has failed. And why does he imagine that this is an appropriate moment to achieve the goal?

I do apologize if from time to time I will repeat myself — with regard, for example, to why there should be no Palestinian state. But as long as the international community insists on pushing for this, the response must be forthcoming.

Obama did speak about commitment to the security of Israel, and I’ll want to see exactly what he perceives as providing us with necessary security. Without knowing specifics, it’s just words: perhaps he thinks we can be “secure” if we surrender all of Judea and Samaria to the Palestinians.

He also declares, I’m glad to say, that he is in favor of continuing assistance to Israel and cooperation with Israel regarding development of missile defense systems.

We have been informed that yesterday Obama called Prime Minister Ehud Olmert, Egyptian President Hosni Mubarak, Palestinian Authority President Mahmoud Abbas and Jordan’s King Abdullah. He did this on his first day as president in order to fulfill his pledge to get involved with Middle East affairs “from day one.”

Abbas’s people are claiming he called Abbas first. Don’t know that this is true just because they say so, but it would be regrettable if he called a two-bit leader of not much ahead of heads of state. This would tell us a good deal.

Obama’s position on Iran, as now enunciated in the just-released foreign policy statement, quite frankly terrifies me because of its flaccidness, it’s lack of strength:

“[Obama] supports tough and direct diplomacy with Iran without preconditions. Now is the time to use the power of American diplomacy to pressure Iran to stop their illicit nuclear program, support for terrorism, and threats toward Israel.

“If Iran abandons its nuclear program and support for terrorism, we will offer incentives like membership in the World Trade Organization, economic investments, and a move toward normal diplomatic relations. If Iran continues its troubling behavior, we will step up our economic pressure and political isolation.”

But perhaps we shouldn’t worry. Perhaps the leaders of Iran will be so eager to join the World Trade Organization that they’ll start being nice. After all, Obama is being nice.

Yasser Abd Rabbo of the Palestinian Authority said today that the PA “will not allow” Hamas to create a “separate Palestinian entity” in Gaza . Apparently he hasn’t noticed that there are already two Palestinian entities. So many words. How will the PA stop it?

Meanwhile, Mashaal of Hamas says he’s in favor of reconciliation with the PA, but on the basis of “resistance,” not concessions to Israel. In other words, do it their way or not at all.

Mashaal is calling for Europeans to talk with Hamas.

And he speaks about gains soon to be achieved: “the lifting of the blockade and the opening of crossing points.” This is precisely what worries me. We’re going to be pressured big time to allow this.

One thing we are doing is preventing the PA from transferring cash to Gaza to pay workers there. This undercuts PA influence in Gaza, although certainly the Israeli goal is to prevent cash from making it into Hamas hands.

This sounds good: We’ve told the UN and other aid groups eager to be involved in rebuilding that each project has to be approved by us, and that there must be guarantees that none of the work will benefit Hamas. In truth, tough to do on the ground as UNRWA and others are in bed with Hamas, but a good policy.

I’m reading, however, that Washington wants the PA involved.

A Hamas spokesman announced today that Hamas will be distributing cash, starting on Sunday, to residents of Gaza hard hit by the war. In total about $37 is to be distributed in Euros (shekels being in short supply). Those whose homes were destroyed, who lost family members or were wounded will be compensated according to a schedule.

Directly or indirectly, we can assume this is Iranian money.

This is apparently a bid to shore up popular support for Hamas.

From the Post, we have this quote from Egyptian Foreign Minister Gheit:
“Whether Shalit is alive or not alive, this is a question that needs investigation now. I have no information and I
believe the Israeli side has no information either.”

Meanwhile, Hamas is saying that there is no progress on negotiations for Shalit, and a spokesman for the Popular Resistance Committees said, “The Israelis are wrong if they think the war will help them pressure us on Shalit. Our demands have not changed: The entire list of prisoners we demanded, and in addition, launching talks on lifting the siege.”

If ever we needed to be tough…

Barak is still saying the war may lead to a break-through in securing Shalit.