Second Lieutenant Aharon Karov, who is from Karnei Shomron and serves in the Paratroopers Battalion, was critically injured in a booby-trapped house in Gaza last night.

When Aharon was called up a week-and-a-half ago, he had been married to Tzivia Mordechai from Kedumim for less than a day. ((Yes, I know, there is the feeling that this shouldn’t happen, and in certain circumstances newlyweds are cut slack in terms of reporting for duty. But this is a war of self-defense we’re in.)

My heart goes out, most especially, to Tzivia, in these circumstances. Aharon’s father, Rabbi Zeev Karov, is a dean of a Yeshiva high school in Kedumim.

The “triumvirate” has apparently decided for the moment not to move ahead to the third stage of the war, in order to give negotiations on a cease-fire a chance.

What we’ve done, however, is to bring in more of the reservists, and to send more of our regular troops into Gaza City. And so, whatever we call the current operation, and whatever is still not being done, we are on the move and continuing to attack.

Chief of Staff, Lt. Gen. Gabi Ashkenazi, reported to the Knesset Foreign Affairs and Defense Committee today that: “We have achieved exceptional results in damaging Hamas, its infrastructure and its military wing.” Our troops are “doing an extraordinary job,” in an operation that is “very complicated.”

And Minister of Defense Ehud Barak, speaking at an Air Force base today, said, “Yesterday, we heard, and we respect the calls of UN Secretary-General Ban Ki-Moon, and, of course, we are also monitoring developments on the Egyptian initiative, but the fighting goes on and the IDF is continuing to apply force.”

What Barak is referring to is a statement the Secretary-General made in NY yesterday, saying he was “very frustrated and concerned” that resolution 1860 has not been fully honored. “The fighting must stop,” he said. “To both sides, I say, ‘Just stop now.'”

Unfortunately, Ban is due in this area tomorrow, and will be in Israel on Thursday. He has indicated that he will be meeting with Arab and Israeli leaders and insist that the recent resolution be “respected fully.”

I make two observations here: One, that it is all very well and good to ask us to stop, when Hamas has no intention of stopping.

And two, the UN charter itself does not require us to stop. Even Chapter VII, which includes provisions for enforcing resolutions, says, in article 51:

“Nothing in the present Charter shall impair the inherent right of individual or collective self-defense if an armed attack occurs against a Member of the United Nations, until the Security Council has taken measures necessary to maintain international peace and security.”

We know that Hamas is crumbling because on Monday Hamas prime minister in Gaza, Ismail Haniyeh, broadcasting on TV from his hideout, said they would “cooperate with any initiatives aimed at ending the [Israeli offensive] and bringing about the enemy’s withdrawal and the reopening of the crossings” — thus signaling a readiness to work with Egypt on a ceasefire. 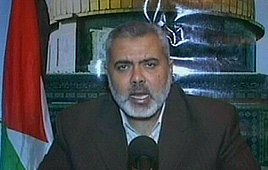 At the same time, however, he said that while talks were going on, they would continue to fight “the occupying forces.”

“We are certain that eventually we will achieve victory and crush the offensive.”

I do believe that within Arab culture pride and honor are so significant that, were they crawling on their knees in the mud in Gaza, they would maintain they were winning.

Please note that when alluding to Israel, they will never mention our Jewish state by name. It’s the “occupying forces” or the “Zionist enemy,” etc.

Now, today, according to Al Hayat (London), Hamas has agreed to deployment of a Turkish force at the crossing at Rafah (from Gaza into the Sinai), even though previously the Hamas position had been that no foreign forces would be permitted on the soil of Gaza.

And why would Turkish forces be acceptable? Because Turkey, pretty much aligning itself with Iran and Syria, has come out adamantly against the Israeli action in Gaza. Turkey, it seems, is Hamas’s friend. Which makes Turkey fairly worthless as a monitor of what’s going through the crossing.

Don’t know how this will play out.

Olmert made an impassioned — and very interesting — speech in Ashkelon yesterday. He began by explaining our position in fighting the war:

“If after this whole effort we discover that rockets with increasing ranges are making their way into Gaza that can reach up to 80, and even 100, kilometers, how will we see ourselves? How will our neighbors see us? Therefore, there is no question. There is no hesitation.

“We want to finish, but only if the two conditions that we are demanding are met – an end to the strengthening of Hamas and to rocket fire. If these two are achieved, we will end our military operation in Gaza.

But then he described the process that brought about an abstention by the US during the vote on SC Resolution 1860:

Secretary of State Rice had helped draft this resolution, and was planning to vote for it. When Olmert learned this, he tried too call President Bush, who was giving a talk in Philadelphia. Olmert demanded that he be put in contact with him, and Bush left the talk to take the call. After hearing Olmert’s request, Bush put in a call to Rice and told her not to vote for the resolution.

Said Olmert, of Rice: “She was left shamed. A resolution that she prepared and arranged, and in the end she did not vote in favor.”

Please see the comments of Anne Bayefsky, of Eye on the UN, with regard to what she considers a betrayal of the US in not casting a veto when this resolution was brought to a vote. She describes all of the shortcomings of the resolution.

I would like to turn the focus here on Hamas, because as the world rants at Israel about our “inhumanity” in defending ourselves, it is important that the nature of this radical, jidhadist group be thoroughly understood:

Palestinian Media Watch cites the Israeli Arab newspaper Kul-Al-Arab, which reported on January 9, that Hamas is using children in Gaza in combat support roles. They are even used as scouts for tracking the Israeli army.

One youngster, named Khaled, was quoted: “We the children, in small groups and in civilian clothes, are fulfilling missions of support for the Resistance fighters, by transmitting messages about the movements of the enemy forces, or by bringing them ammunition and food…”

The UN Convention of the Rights of the Child, ratified by 191 nations, forbids the recruitment of children in the course of hostilities, even as non-combatants.

On Monday, Hamas raided 100 trucks carrying humanitarian supplies that Israel had let into Gaza during a self-imposed lull in the fighting. They stole the contents of the trucks and sold them to the highest bidders.

The complexity of the booby traps that has been set by Hamas is considerable. Every house that is abandoned is being booby-trapped. In one instance that shocked the IDF forces a fuse was discovered in a zoo, with the wire running past cages of animals, to a nearby school.

According to Public Security Minister Avi Dichter, Hamas is using Shifa hospital in western Gaza City, in a very crowded part of the city, as a place for meetings:

“…you can hear from the Palestinians who visit there – it is somewhat of an open secret – that Hamas commanders walk around the hospital, in some instances wearing doctors’ robes,. In some cases the Hamas commanders kick medical teams out of rooms so that they can hold meetings.”

Over the weekend, Hamas even used the hospital as a salary distribution site for those commanders who were elsewhere but who could come out of hiding to collect their pay.

I end today by sharing this, from a left wing writer, in a left wing publication. Bradley Burston, writing in Haaretz, in his “Gaza War Diary IV,” speaks of ambivalence Israelis feel about the war:

“The reasons for the ambivalence go to the complex heart of the Israeli psyche. The compartments there include well-insulated cells for past and future attempts at annihilation of Jewish people; well-justified disgust with Hamas as a barbaric, cynically mercenary, murderous agent of the ideology of extermination; and the dread that accompanies the sinking suspicion that whatever action one takes to fight radical Islam in this region, radical Islam seems to profit from it.

“Another distinct cell contains images of the Palestinian civilians killed in Israeli air strikes and artillery shelling in the Gaza Strip…news footage of Palestinian casualties, infants, women and the elderly killed and wounded in Gaza, causes tremendous emotional pain to Israelis.

“…In recent days, however, Israeli moderates and the center-left have been faced with a new and bizarrely troubling thought: What if this most denounced of wars actually does some good?

“Lurking at the margins, are signs that this war may have positive downstream effects for Israel…Much of this hinges on the effect it may ultimately have on Iran and its satraps…the war, as horrible as many of its direct results have been, may actually serve to break the momentum of the Iranian juggernaut.”

What he’s talking about here — from the left — has existential import for Israel. This is something that all too many still fail to perceive.

Never again will we go quietly to our own destruction, nor should the world expect us to.