Beyond what’s decent.  Way beyond what can be accepted with equanimity:

There are legal arguments over Jewish communities — “settlements” or “outposts” — in Judea and Samaria.  We can take a stand against the government position regarding some (or all) of these.  Presumably (ideally) those arguments can be pursued in courts and via negotiation, with dignity. Presumably if in the end the government or the IDF or the civil administration (appointed by the IDF) in Judea and Samaria or the court decides a particular settlement or outpost must come down, that, too, can be done with dignity — with decent Jewish respect.

But that’s not what happened last night in Mitzpe Avichai, outside of Kiryat Arba (which is itself adjacent to Hevron).  Police and representatives of the civil administration, after first blocking roads, came in the small hours of the morning, roused families from their beds, ordered them outside and destroyed their temporary homes.  There was a light rain falling and the temperature was close to the freezing point.

Ten structures were destroyed, nine of which were inhabited. I believe the tenth was a synagogue.  Among the families so evicted were several children and babies.  The Flaishman family, by itself, for example, has seven children.  Miriam, the mother of these children, said, “They arrived in the middle of the night.  It was brutal. I woke up after they broke down the door and were already in the living room.”

This is simply unacceptable.

Whether it was legal for those buildings to stand or not becomes an issue that is secondary. Children and babies have rights.  The police and civil administration have obligations.

And yet…I read in YNet that, “No unusual events were reported during the eviction of the outpost…” By this is meant, of course, that there was no violence and the residents did not fight back.  But to depict the night-time eviction of youngsters and babies into a freezing rain as not an unusual event?

It is my understanding, based on information from a knowledgeable source, that representatives of the government recently testified before the Knesset committee on the rights of the child, and offered verbal assurances that in instances where “outposts” are taken down children will be appropriately provided for. 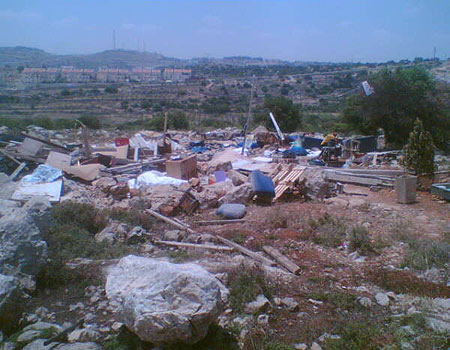 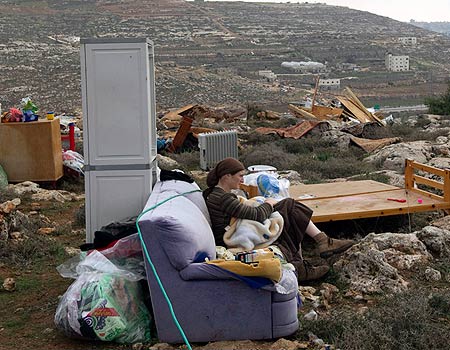 The residents of Mitzpe Avichai have said they are not deterred and will rebuild.  I will follow with information regarding the legal situation as I can secure it.

But the moral issue supersedes the legal issue in my opinion.  I ask you PLEASE to contact Prime Minister Netanyahu without delay.  On this issue especially it is important to keep the message succinct and clear. No speeches, no history lessons.  Just a direct statement, which is more powerful:

Tell him that official action on the part of the government or its representatives that brings children and babies from their beds into a freezing cold rain in the middle of the night, as just happened at Mitzpe Avichai, is shameful and morally unacceptable.  As he is the head of the government, you hold him accountable to make certain that it does not happen again.

This is sufficient of itself.  If you wish to add one further thought, tell him that you know that the legislation that has been proposed that deals with preventing unnecessary dismantlement of settlements addresses the rights of children.  Right now that legislation is frozen and it is in his hands to make certain that it advances speedily.

Change the wording of the above just a bit, so that it is clear that what you are saying represents your personal sentiments.

E-mail: Memshala@pmo.gov.il and also pm_eng2@it.pmo.gov.il (underscore after pm) use both addresses

This is one of those instances in which numbers count.  Netanyahu needs to hear from a great many people — and before the beginning of Shabbat here, please!