From Israel: “Yikes! They Are Still There”

But of course they are!  The myriad of problems Israel faces, that is. 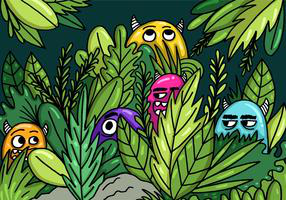 How delightful Yom Ha’atzmaut was, with its respite – its sense of celebration.  The good things I wrote about are no less important and we should hold on to them.  But it’s time to shift focus.

Prime Minister Netanyahu is requesting an additional two weeks in which to form a coalition, as permitted by law.  There have been several interruptions in his ability to concentrate on putting together a government, including Yom Hazikaron/Yom Ha’atzmaut. But this aside, it is proving to be a difficult task for him to bring various parties and factions together. We must, simply must, have a functioning government in place by the May 28th deadline.  There is likely to be an expansion in the number of portfolios offered in order to accommodate the various demands.

The Union of the Right, which encompasses Habayit Hayehudi, is demanding the Education portfolio for head Rafi Peretz, and the Justice portfolio for Bezalel Smotrich, as these are the two ministries that were in the hands of Habayit Hayehudi in the previous government – Naftali Bennett as Education Minister and Ayelet Shaked as Justice Minister.  There is little contention about the demand that Peretz head Education.  “Forty-three years in the education field should count for something,” he said. He was dean of the Otzem Pre-Military Academy before becoming chief rabbi of the IDF.

Smotrich (pictured) –  a savvy lawyer who understands what sort of changes are needed with regard to issues such as selection of judges and, very importantly, would stand tough – would be excellent. 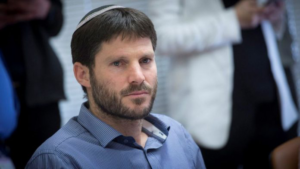 But he’s running against Netanyahu’s desire to put Yariv Levin (Likud) in that position.  And in fact, Levin would also be excellent.  There is, however, one proviso with regard to Levin:  He is more likely to do the bidding of the prime minister.

There are reports that Attorney General Avichai Mandelblit is likely to agree to postponing the pre-indictment hearing for the prime minister.  This would likely be a postponement of several weeks.  According to one report (in the JPost), not beyond the July 10th deadline Mandelblit has already declared, according to another (in the Times of Israel), just possibly to September. 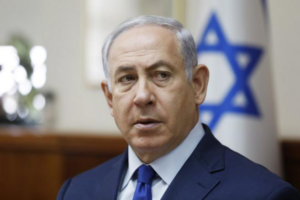 At a bare minimum, Netanyahu is eager to avoid dealing with this during the coalition negotiations (it would likely weaken his bargaining position) and during the early weeks of the new government.

A Justice Ministry official has been cited by the Times as saying, “No one is under any illusions: Netanyahu wants to buy time to arrange for himself — once his coalition is ready — an immunity law that will stop him from standing trial.”

I’m all for that: I believe that charges or potential charges against a sitting prime minister should be frozen until he or she is no longer in office.

Once we have a government in place we very badly need a prime minister who can govern without distraction. As well, we need a head of state able to interact in the international sphere (something he does superbly well) without this hanging over him.

The quiet out of Gaza, with regard to resumption of rocket attacks, seems to be holding…by a thread.

I don’t like what’s going on in several regards (and I’ll get to this), but I recognize that – just as it seems Netanyahu made sure the fighting halted before Yom Ha’atzmaut – he is exceedingly unlikely to make waves before the Eurovision Contest in Tel Aviv which begins this week and runs until motzei Shabbat (Saturday night).

If you are not familiar with this event, see here for more information: 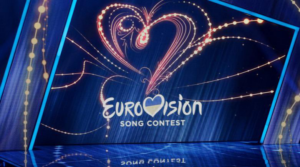 Not only will this be a huge televised event, there will be crowds of international visitors in the city.  In truth, this is not something that excites me, nor do I think it should factor large in Israel’s scheme of things. But I fully appreciate the worry within the government about Islamic Jihad attacking Tel Aviv at this time. An attack on Tel Aviv this week would be disastrous.

Thus, I will cut our prime minister slack and hold off on a full critique of our response to Hamas/Islamic Jihad until the visitors who came for Eurovision have gone home.

This said, my immediate observations on the issue:

All of the talk about the “ceasefire” understanding is coming from the Arabs, not the Israeli government. What seems to be the case is that essentially we have agreed to certain concessions in return for nothing more than their not bombing us.

This is NOT how it should be, and the dynamic must change.

We were supposed to have quiet from their side, or so we have been told. There was to be an end to all “resistance” except “peaceful border protests.” But it would seem they do not know from “peaceful.”

On Friday, there were some 6,000 Gazans at the fence, some of whom threw explosives and rocks at Israeli troops. In the course of the clashes, 30 Arabs were wounded and one killed.

In addition, incendiary balloons ignited a fire in Nahal Oz, and Hamas released a social medial video showing the launching of the balloons. That was a very “peaceful” thing to do.

“If Israel does not fulfill its side of the agreement, the resistance has the means to force it to.”

This is beyond infuriating, and definitely not the tone of an adversary that has been even partially deterred.  But we must keep in mind that Netanyahu said that it’s not over. 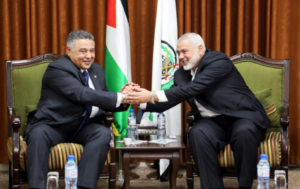 I note here that the Egyptians detest Hamas, an offshoot of the Brotherhood (although it would be difficult to prove from this picture). Which is not to say that the ways in which the Egyptians “fix” the situation are necessarily to our liking.

Gazan Arabs are saying that the concessions Israel was to make were to be in place “within a week.”

Who knows? I would not hold my breath on this.  Whatever the case, it is likely that their anticipated gains will keep them quiet for an interval. (I am NOT suggesting this is how we should play it, but rather that they are not likely to start attacking again in a week whatever their bombastic threats.)

The long-awaited, eagerly-sought funds from Qatar are due into Gaza within the next couple of days; the sum is $30 million but it’s not clear if it will all come at once.  (Qatar is promising funds to the PA as well, and I will come back to that in a future post.)

The range for Gaza fishermen has been expanded again.

But most worrisome to me is this (if true):

A “Gaza-based official, who is a senior politician, said Israel agreed to ‘lift restrictions on importing 30% of so-called dual-use goods into Gaza…’”

Israel has blocked entry into Gaza of dual-use goods for some time, although the list of banned items varies in an attempt to be responsive to the needs of the civilian population.  These are goods or materials that can be used for peaceful purposes but can also be used for purposes of aggression.  A prime example is concrete, which might be used for constructing foundations of houses, but can also be used to build tunnels. Then there are certain chemical fertilizers that can be used for making explosives.  And so on.

What is crystal clear – or seems so to me – is that the current situation is not stable, and should in any event not be allowed to stand.  We are sitting ducks, waiting for the next rocket attack from Gaza.  Once a new government is in place, it will have to decide how to respond. And a creative and tough-minded solution is necessary.

If going into Gaza and taking down Hamas (and Islamic Jihad) is not the preferred option, then other creative and tough alternatives will have to be devised.

A suggestion that is being advanced by a variety of analysts of late (and yes, has been suggested by some of my readers) involves Israel taking over just a portion of Gaza.

One version has Israel moving into Gaza by a kilometer or so and creating a security zone. It would not stop rockets, but it would stop violence at the fence – and attempts to break through into Israel ‒ and go a long way to stopping incendiary balloons. It would also prevent the shooting of short range projectiles such as mortars, which the Iron Dome cannot take out because there is insufficient warning.

Another version is punitive: every time a rocket or an incendiary balloon is launched, a small portion of Gaza would be taken by the IDF.

Please!  Do not write to me to tell me you have yet another idea.  Neither the military nor the government is taking advice from me.  I share the thoughts above by way of example only, to make a point.

You may have read Hamas propaganda claiming that they have defeated the Iron Dome.  It is not so.  Hamas had a new tactic of launching many rockets at one time, in an effort to overpower the Iron Dome.  But it has undergone major improvements since the war in 2014, and a full 90% of the rockets headed toward populated areas or strategic installations were stopped (the Iron Dome does not go after rockets whose trajectories indicate they will land in an open area). 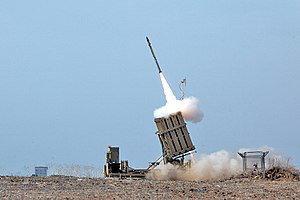 You may also have read that an Israeli bomb killed a pregnant woman in Gaza and the child she was with – her niece. But in point of fact it was a Hamas rocket that misfired.

According to US officials, the date of the unveiling of the “Deal of the Century” has been pushed back yet again, until after Ramadan in early June.

If you missed my posting for Yom Ha’atzmaut, which provided marvelous information about Israel, I encourage you to go back and look at it.  If it is not in your inbox any longer, you can find it here: