From Israel: Without Shame

It’s a fascinating phenomenon, a paradox:

Muslim Arab (and thus Palestinian Arab) culture is an honor-shame culture.  Honor is the ultimate value.  But in this context “honor” means receiving appropriate courtesies and respect – being viewed positively by others.  It’s an external thing, not having to do with an internal sense of having conducted oneself properly. 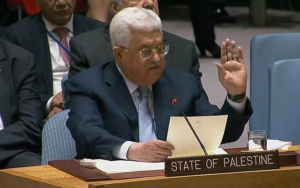 Thus, there is no shame in lying outrageously, if you imagine it enhances your external honor. In fact, if lying is for “the cause,” you are bidden to do so.
~~~~~~~~~~
On Tuesday night, I steeled myself, and I watched a YouTube video of Mahmoud Abbas’s speech to the UN Security Council. Of course, the Council itself is a body without honor (in the Western sense), and had no business welcoming Abbas.  But that is another story.
~~~~~~~~~~

During his speech, Abbas outdid himself with his lying and his outrageous misrepresentations. I will not belabor all of it, because much of what he said is ludicrous.   Consider this, for example (emphasis added):

“We are the descendants of the Canaanites that lived in the land of Palestine 5,000 years ago and continuously remained there to this day. Our great people remain rooted in their land. The Palestinian people built their own cities and homeland and made contributions to humanity and civilization witnessed by the world. They established institutions, schools, hospitals, cultural organizations, theaters, libraries, newspapers, publishing houses, economic organizations, businesses and banks, with wide regional and international influence.”

Talk about laying it on. There simply cannot be anyone in that hall who truly believed what he claimed.  Yet they sat there without sniggering.

Does Abbas himself imagine that some people believe him?  I suspect it does not matter to him, as long as he puts these things on the record.
~~~~~~~~~~
It is self-evident: I do not believe it is really necessary to declare unequivocally that the Palestinian Arabs are not descended from the Canaanites.  They are of very recent and very dubious vintage.  But I will point out that the 5,000 year figure is important, because would put them in the land before the Jews. And that is what this is about.
~~~~~~~~~~
There were, as well, other transparent whoppers he offered to those who were assembled, such as:

“We have thus been committed to fostering a culture of peace, rejection of violence…”

~~~~~~~~~~
While the statements about Palestinian Arab origins and pursuit of peace are blatant in their falsity, there are other declarations Abbas made that are also out-and-out lies, but might sound plausible to some.  I would like to provide some clarity with regard to the record; it is good to have answers.
~~~~~~~~~~
Abbas said:  “Israel violates its obligation to implement resolutions 181 and 194.”

This is a common Palestinian Arab charge. But there is no “obligation” attached to either of these resolutions, because they were both passed by the General Assembly, whose resolutions are recommendations only and not binding.

Resolution 181, of November 29th 1947, is commonly called “the partition plan.”  Although it was a great deal more, at its core was a suggestion that Palestine be divided, with one state for the Jews and another for the Arabs.  The UN was to have certain essential administrative responsibilities in connection with this.

The Jews accepted the proposal.  But the Arabs vehemently rejected it because they would not sanction any state for the Jews. In addition, and significantly, the UN itself was remiss in fulfilling its administrative responsibilities.

And so, the resolution failed and subsequently carried no weight.  It is absolutely fallacious to maintain that Israel is still bound today by obligations with regard to this resolution.

It is a point of international law that once an offer has been rejected, the party that rejected it has no right to then claim what was offered.  The Arabs said no. They cannot now say that the Jews owe them what they rejected.

Additionally, the division of Palestine recommended by 181 involved an Arab state, not a specifically Palestinian one. There was no mention whatsoever of “Palestinians,” and so it is not possible for Palestinian Arabs to today claim that the proposed state was to be theirs.
~~~~~~~~~~
Abbas further stated that Israel’s admission to the UN was predicated on its obligations regarding the two resolutions and that Israel’s foreign minister Moshe Sharett had committed to this in writing. 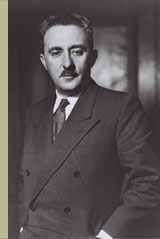 This is a neat distortion of the reality.

Israel was granted UN membership on May 11, 1949, without conditions regarding 181.  UN policy requires a nation seeking membership to commit to general obligations delineated in the Charter, e.g., settling international disputes peacefully. The General Assembly then votes to accept the nation if it is considered “peace loving.”

After Israel’s acceptance, Sharett delivered an address in which he outlined the principles that would guide the foreign policy of Israel.  Among them:

“Efforts to achieve an Arab-Jewish alliance based on economic, social, cultural and political co-operation with the neighboring countries. This alliance must be within the framework of the United Nations…”

Efforts to achieve an alliance “with neighboring countries” is hardly the same thing as committing to establishment of an Arab state in a portion of Palestine, as envisioned in 181.
~~~~~~~~~~
It should be noted that when Israeli independence was declared by David Ben Gurion, on May 14, 1948, the Declaration included this:

“The State of Israel is prepared to cooperate with the agencies and representatives of the United Nations in implementing the resolution of the General Assembly of the 29th November, 1947 [181]…” 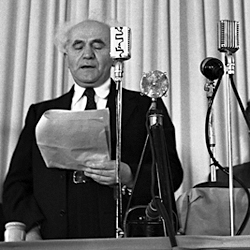 But by late in 1949, after Israel had fought the War of Independence, Ben Gurion declared the resolution null and void because the UN had failed entirely to fulfill its obligations:

“We are not setting ourselves up as judges of the United Nations, which did not lift a finger when other States, members of the United Nations, openly made war on the decision adopted by the General Assembly on 29 November 1947, and tried by armed force to prevent the establishment of the State of Israel, to blot out the Jews living in the Holy Land…” (Emphasis added)
~~~~~~~~~~
As to Resolution 194, which was adopted December 1948, its focus was facilitation of peace between Israel and the Arab states and in that regard called for the establishment of a Conciliation Committee. Its focus was not the partition of Palestine into two states.

The Palestinian Arabs have persisted in claiming that 194 gave them the “right of return”: an “inalienable right” for all those Arabs who fled from Israel during the war to return to their villages.  In point of fact, there is no such right.

That alleged “right” is based on one clause: “the refugees wishing to return to their homes and live at peace with their neighbours should be permitted to do so at the earliest practicable date.”  We are left with the fact that many who had fled Israel would not have been peaceful were they to have returned (and all the more so would this be the case today), and the question of what is meant by “the earliest possible date.”
~~~~~~~~~~
What is carefully ignored by those promoting this “right” is that Resolution 194 had instructed the “Conciliation Commission to facilitate the repatriation, resettlement and economic and social rehabilitation of the refugees…”  That is, several alternatives were considered as viable; this resolution does not charge Israel with responsibility for taking in all those who had fled.
~~~~~~~~~~
Yet Abbas was not ashamed to speak about the “six million Palestine refugees [who] continue to suffer from the cruelty of exile and loss of human security. They continue to wander the world after the loss of their peaceful and stable lives in their homeland.”

“Six million” because he’s counting subsequent generations, and “wandering the world” – which is hyperbole – because these Arab pawns have not been encouraged, neither by UNRWA nor by Arab nations, to resettle and begin new lives.
~~~~~
I heard Abbas say in his address that, “No one has held Israel accountable when it occupied our territories in 1948.”

And I didn’t imagine it, because Benjamin Kirstein, writing in Algemeiner heard it too:

This is a point of considerable significance, because it is an admission that the Palestinian Arabs want all of Israel, not just the portion taken by Israel in 1967, as they usually claim.

What is fascinating is that this sentence is not in the official text of Abbas’s talk, released by PA media. Either Abbas adlibbed on this, or they excised it because it was too revealing.
~~~~~~~~~~
It was also fascinating to me to hear Abbas claim that he always meets with leaders (implying that he is indeed willing to negotiate). But what he fails to mention is that he walks away from those meetings without coming to terms on any issues.

In fact, when you read his stated demands in this talk, you realize that it’s the same old, same old. No give, no compromise – and there never will be.
~~~~~~~~~~
In summary:  Abbas wants the US to rescind its recognition of Jerusalem as the capital of Israel.

He is calling for:

[] A “just” solution for the refugees based on Resolution 194
~~~~~~~~~~
After laying out his demands, Abbas walked from the UN chamber without waiting to hear the response of Israel or the US.  As was pointed out by both, this was, diplomatically speaking, enormously rude and an indicator of Abbas’s refusal to hear what others have to say.
~~~~~~~~~~
Israeli Ambassador to the UN Danny Danon spoke next, and very well. 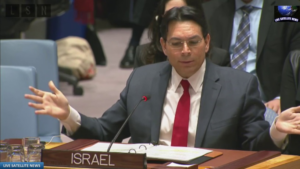 He addressed an absent Abbas: “You are no longer part of the solution, you are part of the problem.”

His full remarks are here:

http://www.jewishpress.com/news/eye-on-palestine/palestinian-authority/danon-to-abbas-at-un-security-council-you-are-no-longer-part-of-the-solution-you-are-the-problem/2018/02/20/
~~~~~~~~~~
US Ambassador to the UN Nikki Haley was magnificent, as she usually is. 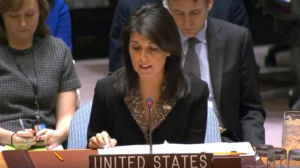 She said, “But I will decline the advice I was recently given by your top negotiator Saeb Erekat. I will not shut up.” (Yes, he really said this.)

She ended by saying that the US is ready to engage in negotiations with the PA.  The US negotiators (Jared Kushner and Jason Greenblatt) were sitting right behind her.  However, she said, “We will not chase after you.  The choice is yours.”

You can see her delivery here:

http://www.israellycool.com/2018/02/20/watch-nikki-haley-speaks-some-hard-truths-to-the-palestinians-at-un-security-council/
~~~~~~~~~~
And so, I am left with just one overriding question:

Why is the US bothering, when it is so blatantly obvious that negotiations with Abbas will never be fruitful?  Why are Kushner and Greenblatt devoting enormous amounts of time in putting together what we are being told will be a very detailed plan?

A manifestation of Trump’s attitude that he is the ultimate problem solver?

Or a sly effort to demonstrate at long last that peace with the PLO is an impossibility?