From Israel: “WHAT Are They Thinking??!”

The workshop/conference in Bahrain has not even started yet, and we are being deluged by news reports about the Trump plan.  Quite frankly, it is very wearisome.

Today everything is gearing up, with the activity officially beginning tomorrow. I would be pleased to skip it all, but feel there are certain basics I should touch upon.

On Saturday, the Trump administration released its 40 page economic plan, dubbed “Peace to Prosperity.” It is accompanied by a 96 page list of specific proposed projects.

The plan proposes the expenditure of $50 billion dollars over the course of 10 years, but its terms can only be implemented via an Israeli-Palestinian Arab agreement. It would be funded in the main by Arab states and wealthy private investors. Most of that money ($28 billion) would go to the PA in Judea and Samaria and to Gaza, with some funneled towards Jordan ($7.5 billion), Egypt ($9 billion), and, bewilderingly, Lebanon ($6 billion), which would be eligible for certain development projects.

The specific projects that are listed include power plant upgrades, infrastructure improvements, establishment of a new university, and modernizing Palestinian Arab hospitals and health clinics.  The plan envisions a major reduction in unemployment, hi tech development, upgrade in tourism, improvement in educational institutions, and much more.

What I was struck by in reading citations from/US official references to the plan (no, I did not read the full 40 pages), was a sort of “pie-in-the-sky” tone that has very little to do with reality.  For example, in a press conference, Jared Kushner said this plan has the ability to “empower the Palestinians to realize their ambitions.”  But does he really comprehend the nature of those “ambitions”?  He does not have to like them or approve of them, but it behooves him to know what they are.

Palestinian Arab officials responded accordingly on Saturday.  Khaled Abu Toameh reports that Munir al-Jaghoub, a senior official with the Palestinian ruling Fatah faction, said that the US was proposing a solution to “kill the political ambitions of the Palestinian people.”

Abbas has declared:  “We will not be slaves or servants to Jared Kushner, Jason Greenblatt or David Friedman.

“There will not be normalization between the Arab states and Israel…before there is a solution between Israel and the Palestinians.”

Ben-Dror Yemini, in “Kushner is repeating the same mistake,” makes the point I have come back to many times. Relieving poverty does not reduce terrorism, nor is every terrorist poor:

“…the brainwashing and incitement are a lot stronger than the options of money and prosperity.

“The biggest obstacle to achieving peace was and remains the fantasy of a ‘Palestinian right of return,’ which [is] supported by not insignificant portions of academia, the media, and the Israeli and global Left…

“It’s difficult, very difficult, to wean an entire community off illusions…It’s a lot easier to invite people to a workshop in Bahrain.” (Emphasis added) 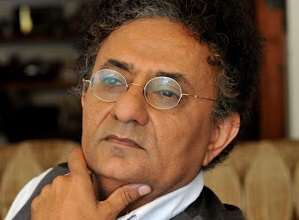 It is also worth noting the nuanced inside view offered by Avi Issacaroff, who calls the plan the “bribe of the century” (emphasis added):

“To the credit of those who came up with this plan, it should be said that the bribe is neither small nor modest. It involves an enormous sum of money…

“…At a time when the PA is paying approximately 50 percent of its employees’ salaries (due to its refusal to accept tax revenues from Israel), and at a time when stories of corruption by high-ranking PA officials are breaking every day, the public is rather pessimistic about the chances of establishing a Palestinian state. For this reason, talk of economic improvement and the billions of dollars in investment is stirring a great deal of thought among many West Bank residents, who wonder if, perhaps…it is time to focus on the here and now and aim for economic improvement.

“As things appear at present, the link between the economic plan, which is only theoretical at this stage, and the Palestinian leadership’s unequivocal refusal to accept any part of the Trump plan, doom the plan to complete failure…” 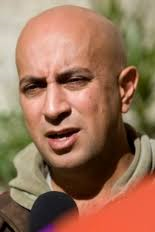 There are a few specifics mentioned in the plan that are troubling, but one most specifically:

A proposal that Gaza and Palestinian Arab areas of Judea and Samaria (referred to as the West Bank) be linked with a modern transportation network, including a roadway and ultimately a high-speed rail service.

Haven’t we been assured by the Americans that the plan would not compromise Israeli security?  Do they truly imagine this would not?

Itamar Eichner, writing in YNet, comments that in light of this proposal it is rather strange that Israel’s Coordinator of Government Activities (COGAT), Gen. Kamil Abu Rokon, was not invited to the conference, as his participation “would be essential to giving momentum to any link construction.”

This proposal “not only requires agreement from Israel but also arrangements from Abu Rokon himself as the person in charge.”

What Eichner has fingered is a contradiction that perhaps epitomizes this entire venture:  The Americans proposed a project that presumably would improve the situation of the Palestinian Arabs.  But they have declined to follow through in a manner that might bring it closer to actualization because inviting an Israeli official would distress the Arab participants.  There you have it.

Eichner says the proposal is “making the Israelis see red.”  As well it should.  A high speed rail would be a neat way to smuggle weaponry and terrorists into Judea and Samaria.  But Prime Minister Netanyahu is playing it cool, especially as US National Security Advisor John Bolton is here right now to discuss Iran and related issues.

On Sunday, the prime minister took Bolton (with hat, in the picture below) and US Ambassador David Friedman for a tour in Judea and Samaria, and the Jordan Valley.  While indicating that for security reasons Israel will never relinquish the Jordan Valley, Netanyahu said, “…in general, I would say that we’ll hear the American proposition, hear it fairly, and with openness.” 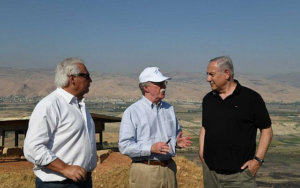 “It will be relevant when Gaza will stop being a pro-Iranian terror kingdom, meaning it’s irrelevant today and in the foreseeable future.”

Rest assured: Hanegbi (left below), a close Netanyahu associate, was speaking for the prime minister. 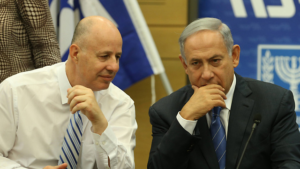 It is eminently clear that the Sunni states, while much more predisposed to good relations with Israel than ever before, cannot in any way be counted upon to push the PLO to cooperate with the Trump plan.  If Abbas is resistant to the economic plan, there even remains a major question as to how much these states will be ready to contribute to support it.

Saudi Arabia’s Foreign Minister, Adel al-Jubeir, gave an interview on Sunday with France 24, during which he said (emphasis added):

“The Palestinians are the ones who have the ultimate decision in this, because it’s their issue and so whatever the Palestinians accept, I believe everybody else will accept.”

Jubeir said his country supports a political process based on an independent Palestinian state along the pre-1967 borders (sic) with eastern Jerusalem as its capital. 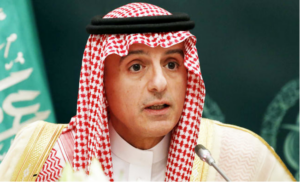