There is an idiom that came to my mind this week: “You can run, but you can’t hide.”  It really hit home:

There is a whole lot of heavy stuff, worrisome stuff, going on in our part of the world.  The temptation to run from it, figuratively speaking, is huge (and understandable).

But in the end, we – Israelis and those who love Israel – can’t hide, and best be aware.

I say all of this because, no sooner had I sent out my last posting, which described in some detail the threats we are dealing with to our north, then additional news broke:

The IDF has revealed information about an enormously important site being set up by Hezbollah in the Bekaa Valley in Lebanon for the production of precision rockets. Iran is providing equipment and the guidance of senior officers.

While this is new information for laypersons – and the exposure to laypersons is calculated – the site has been on the radar of the IDF for a while.  Hezbollah, uneasy about the possibility of an attack on the site, has been transferring sensitive material out of the enclave to civilian sites in Beirut.

There is reason to believe that the recent attack by an Israeli drone on a Hezbollah-related site in Beirut may have been connected to this.

On Friday, US Secretary of State Mike Pompeo (pictured) delivered a message to Lebanese President Michel Aoun, warning that Lebanon should dismantle this rocket-producing facility or else Israel will attack and destroy it in coming days. He added that the US would support the attack.

The message did not go through standard diplomatic channels but was sent directly to Lebanese Foreign Minister Gebran Bassil, known for his close ties to Hezbollah leader Hassan Nasrallah.

The Lebanese, who have also been warned by Israel that they will pay a dear price if we attack, are clearly nervous: Lebanese Prime Minister Saad Harari (who has three Hezbollah members in his cabinet) just declared in an interview that “Hezbollah is not only Lebanon’s problem –– it is a regional problem.”

But Mustapha Allouch, a Lebanese politician, tells it straight: “Everybody in Lebanon knows Iran and Hezbollah call the shots rather than the Lebanese government and military.”  Lebanon has been hijacked by Hezbollah, he says, and the Lebanese are giving them permission to do so – this is a manifestation of the Stockholm syndrome. See the MEMRI video clip here: 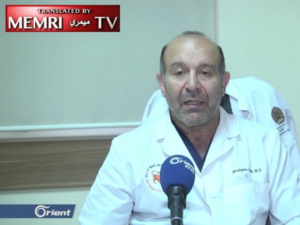 At about the same time, Fox News revealed that Iran, in its continuing attempts to establish a major military presence in Syria, is constructing its biggest military base there yet. Scheduled to become operational in a matter of months, it would house thousands of Iranian soldiers, as well as store missiles.

Its presence at the Syrian border with Iraq, only 200 miles from a US base, has been confirmed by satellite photos secured from ImageSat International, an Israeli civilian satellite company.

There has been no direct public response by Israel to this situation.  However, there has been renewed talk in the news about what had been the readiness of Prime Minister Netanyahu to strike Iran back in 2012.  He was very seriously stymied by Obama, and in the end did not act.

Along with this, we are seeing reports indicating that Israeli officials are again considering this option, reasonably confident this time around that Trump would not stand in the way.

I have devoting considerable attention in recent posts to what is happening in the north, as it seems clear that Iran and its proxy Hezbollah represent the greatest threats to Israel.

Because the situation could explode at any moment, I have felt that a ground war to totally eradicate Hamas (something called for in many quarters) would be currently unwise, putting too much strain on our military. In my last posting, about Iran, I included a quote from former Chief of Staff Eisenkot from January of this year, indicating that a policy decision had been made in precisely this regard: military focus would be northward.

And yet…this hardly means that Hamas can be ignored, and the question remains as to how this Islamist terror group at our southern border should be handled. It is not an all or nothing situation: A great deal might be done short of a full ground war, and there is deep concern as to whether sufficient action is being taken.

It should come as no surprise that the situation at the Gaza border is heating up.  Iran may be pulling the strings to create tension at our various borders at the same time (see below for more on this).

Analyst Avi Issacharoff believes that Hamas is seeking to emulate Hezbollah: “After Nasrallah vowed to retaliate for deaths of his operatives in Syria, Hamas also hopes to establish a new formula vis-a-vis Israel in response to casualties in border clashes.” The wisdom of this approach, says Issacharoff, was reinforced by Israel’s readiness to end the skirmish with Hezbollah quickly.

All of this may be so, but does not explain what promoted the increased violence at the Gaza fence that took place on Friday, which is more accurately described as a provocation. The IDF Spokesperson’s Unit described the situation thus (emphasis added):

“The demonstrations were of a particularly violent nature, which included…a large quantity of IEDs, grenades and Molotov cocktails being thrown at the security fence and at IDF forces.

“…there has been a rise in the number of attempts to approach the border fence.” 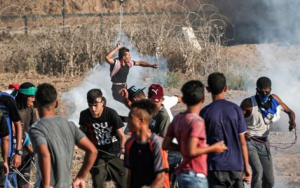 In the course of the melee, two teenage rioters were reportedly shot and killed by the IDF – there has been no IDF response.  Hamas then responded with its retaliation:  On Friday night five rockets were launched into Israel – one came near to hitting a home.  On Saturday, terrorists piloted an armed drone into Israel, lightly damaging a military vehicle.

Israel retaliated by targeting Hamas positions, but I do not believe any terrorists were killed.  My response is az ma – so what? What was accomplished?

The “informal truce” arrangements that Egypt negotiates every so often stand only according to the whim of Hamas leaders.  Concessions are pointless: Israel had lifted certain restrictions on fuel deliveries into Gaza just days ago.

And so, what? Prime Minister Netanyahu delivered a “warning” to Hamas after the attack that any threat to Israeli soldiers or civilians would be dealt with severely.  But I don’t believe words have an effect – it is actions that count.

Foreign Minister Katz delivered a statement today (Sunday) in a Reshet Bet interview that is closer to having teeth (emphasis added):

Katz seems to be suggesting a ground war.  But this, too, is amorphous and just talk. Why the delay in initiating targeting assassinations of Hamas leaders?  Right now would be good time to begin.

I note here, that what happens at the Gaza border is only part of the problem that Hamas presents: after members of the Shnerb family were hit by a remotely detonated bomb outside of Dolev, it made the news that Hamas has been sending explosive experts into Judea and Samaria.

Action against the terror forces in Gaza and coming out of Gaza is required. Now.

I mentioned the Shnerb family and so am delighted to be able to share this:

Dvir Shnerb, 19, who was critically injured in the August 3 terror attack that killed his sister, Rina, and wounded his father, Rabbi Eitan Shnerb, was released from the hospital on Tuesday of last week. Just days later, on Thursday, he received his EMT (medic) certification from Magen David Adom.

We can be not only grateful, but proud. With young people like Dvir, we are doing something very right.

Pictured with his father, also a medic: 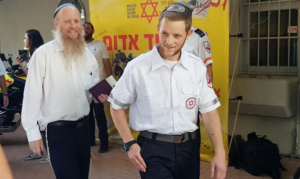 Jason Greenblatt will be leaving his position as US Special Envoy for the Middle East within weeks. After three years serving as a chief architect of the “peace plan,” alongside Jared Kushner, it came as quite a shock that he is leaving just as it is about to be unveiled (right after Israeli elections, we are now told). 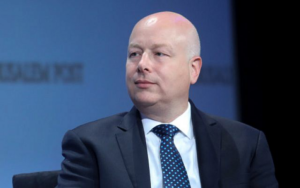 Reportedly, he will stay until after it is released, but that is precisely the critical point at which he would be expected to promote it and work towards negotiations.  That is, if it will be released – there is much speculation on this score.

And then again, if there is any genuine possibility that there will be negotiations to work towards. In light of Palestinian Authority hostility, there is not an iota of evidence indicating this would be the case.

And so, Greenblatt, who originally said he would stay for two years, may have simply decided that this is the time to return to private life and his family in New Jersey.

Avi Berkowitz, a protégé of Jared Kushner, will be taking Greenblatt’s place.

Perhaps it is more than the hostility of the Palestinian Authority specifically to the “Deal of the Century” that may have convinced Greenblatt it was a lost cause.  Perhaps it was the ever more intransigent and provocative conduct of the PA more broadly.  Israel faces an enemy not just with Hamas, but with the PA as well.  Consider these reports (emphasis added):

“There was great hope and anticipation several years ago when the Palestinian Authority (PA) announced that it was completely replacing its K-12 school textbooks. But new editions merely confirm obsessive Palestinian hatred of Jews and rejection of peace with Israel.

“The older Palestinian textbooks were filled with ugly anti-Zionist and anti-Semitic propaganda. Shockingly, this pervasive spirit of distortion and hate wasn’t only employed in history textbooks, but also dominated language, math, and even science lessons…

“Over the past three years, the PA has released the full set of new textbooks — and they are even worse than the old ones in teaching Jew-hatred, fictionalized history, and a profound glorification of martyrdom, terrorism, and hate.”

“Among the victims of the Café Hillel attack were Dr. David Applebaum and his daughter Nava, who was to be married the day after the attack. American-born Dr. Applebaum was chief of the emergency room and trauma services of Jerusalem’s Shaare Zedek Medical Center and a specialist in emergency medicine…

“While the PA will continue to pay monthly salaries to all of the terrorists, it is noteworthy that the PA just raised the salaries of the two terrorists who prepared the suicide belts [used in these two attacks] to 7,000 shekels [almost $2,000]/month.”

Israeli elections are just a bit more than a week away.  My next posting will focus on this.