From Israel: The Head Spins

I confess, my head is spinning a bit less because of the time with my grandchildren.  Had a great tour of Har Hazeitim with two of them this week.

But the world goes on and on and on, of course, and I want my readers to know that I am still here.  Thus, a bit of catch-up before Shabbat.
~~~~~~~~~~
Daniel Pipes, president of the Middle East Forum, was in town this week for a conference on his Israel Victory program.

I will simply say here that the idea is that Israel cannot achieve what is necessary with regard to real peace until the Palestinian Arabs – who do not embrace compromise at all – recognize that they have lost the battle to weaken or defeat Israel.  Pipes is not recommending a hot war to achieve this, but rather stringency in a number of other aspects of our interaction with them.

This is a concept that I heartily applaud.  We are not nearly tough enough yet, although we are getting better:
~~~~~~~~~~
Monday, by a vote of 87-15, the Knesset passed a law that will require holding back of funds to the PA in the amount the PA pays to convicted terrorists in our prisons and their families. Under Oslo agreements, Israel collects certain tax revenues, amounting to $130 million monthly, on behalf of the PA and turns them over.

“We promised to halt the stipend free-for-all for terrorists and we have made good on our promise. It’s over. Every shekel that [Mahmoud Abbas] will pay to terrorists and murderers will be automatically deducted from the Palestinian Authority’s budget.” Those payments are alluded to in the media as “pay to slay,” a fairly accurate description. The more heinous the attack of the terrorist was, the more money he or she receives.

The bill is modeled after what is referred to as the Taylor Force law recently passed in the US.  Taylor Force was a US veteran killed by a terrorist when he was visiting here.

Taylor’s father, Stuart Force, came to Israel to be present for the passage of the bill.  You see him in the center, below, with MK Elazar Stern (Yesh Atid), to the left, and MK Avi Dichter (Likud and Chair, Foreign Affairs and Defense Committee), to his right.  The two MKs were the driving force behind the bill’s passage. 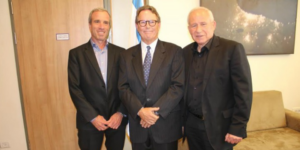 ~~~~~~~~~~
In describing the legislative battle, Stern observed that (emphasis added):

“The biggest obstacle I came across along the way were the attempts to alter the bill, even to the point of diluting its essence.

“Together we [he and Dichter] succeeded in preserving essence and preventing it from being watered down.”

There you have it: unease about being too stringent.  But the good guys prevailed here.
~~~~~~~~~~
Yet look, even the good guy (Stern) said this:

“I also believe and very much hope that it [the law] will be a step forward towards reconciliation and peace.”  Which makes me think he doesn’t understand the Palestinian Arab mentality.

PA spokesman Nabil Abu Rudaineh said: the PA considers this a “declaration of war against the Palestinian people, their fighters, prisoners and martyrs.”
~~~~~~~~~~
While I attempt to ignore or seriously discount rumors, I confess that I remain uneasy about reports that a third party (Egypt? Germany?) is negotiating a deal between Israel and Hamas to secure the release of the bodies of our two soldiers killed in the last war – Hadar Goldin and Oron Shaul – as well as two Israeli citizens with mental disorders who crossed into Gaza.

The assumption here is that we would release some Hamas prisoners in return, as this is Hamas’s bottom line demand. And that is precisely what we should not do. Goldin’s family, bless them, has been lobbying for Israel to refrain from such a deal and to secure the release of the bodies by squeezing Hamas. What would happen, for example, if we began targeted assassinations of Hamas leaders?

We cannot achieve victory by making deals with Hamas.
~~~~~~~~~~
Another instance of the need to be tough:

An illegal encampment of some 170-180 Palestinian Authority Bedouin was established in the 1990s east of Jerusalem. 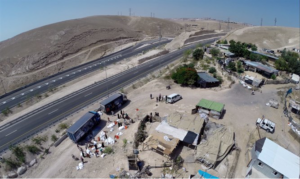 Known as Khan al-Ahmar, the encampment had no authorization or building permits. As it was built within the town limits of the Israeli community of Kfar Adumim, Israel declared it illegal, and said that it had to be demolished.

This is just one instance of many in which Palestinian Arab Bedouins set up legal outposts to block Israeli growth and pave the way for eventual Palestinian Authority contiguity in the area.  The battle over the E1 Area, which is where this illegal outpost is located, is key.

What followed were years of appeals and delays and legal battles within the Israeli legal system. Ultimately the Supreme Court upheld lower court decisions ruling that the outpost was indeed illegal and must be removed.

According to Channel 10 News yesterday, the ambassadors of the five largest countries of the European Union—Germany, France, Britain, Italy and Spain—had met with Oded Yosef, the deputy national security adviser at the Prime Minister’s Office, to warn him that the demolition of Khan al-Ahmar would lead to a stern response from many European countries.

They were rebuffed. Yosef told the ambassadors that the outpost constituted a safety hazard in its current location.  (Kids there, standing on hills overlooking the highway, throw rocks down on cars below.)

He also advised them that the residents had been offered a number of alternatives:  a permanent neighborhood for the residents of Khan al-Ahmar had been established where each evicted family would receive a developed plot for free.

It is important to know this: this is not about humanitarian concerns for the Bedouins.  It is purely political.

Regavim put out a statement in this regard:

“Khan al-Ahmar has become a litmus test for the State of Israel, which must stand firm against the pressure campaign and complete the outpost’s relocation.”
~~~~~~~~~~
Now it appears that the government is moving to remove the encampment. Bulldozers have been brought in and notices have been delivered.

What is more, EU diplomats have been barred from the area.

http://www.israelnationalnews.com/News/News.aspx/248411
~~~~~~~~~~
I want to recommend an excellent piece by Ari Ingel, “Israel, Gaza and international law”:

It makes the case solidly for Israel with regard to international and the situation in Gaza.  It clarifies that:

[] Israel is not an occupier in Gaza.

[] The blockade of Gaza does not constitute an occupation and is legal because Israel is engaged in an armed struggle with Hamas.

[] Quelling a riot – something Israel has repeatedly had to do at the fence – is a legitimate basis for use of deadly force.

[] Deadly force is permitted during hostilities including against civilians who are engaged in those hostilities.

[] The concept of proportionality is vastly misunderstood and in fact refers to an assessment of whether the civilian casualties would be excessive in relation to the anticipated gain. In the Gaza case this involves prevention of a breach of the borders and potential threats to Israeli civilians.

Everyone interested in defending Israel should be in possession of this information.
~~~~~~~~~~
Matters in Syria are horrendous.  I mention the situation briefly here and will return to it as it unfolds.

As the Syrian army joined by Russians, Hezbollah, Shiite proxy forces and Iranian Quds troops (often wearing Syrian uniforms) drive rebels out of Daraa province, refugees by the tens of thousands have fled towards the border with Jordan, and with Israel at the Golan.  When Jordan, which has already received very large numbers of refugees, declared its border closed, the refugees turned increasingly towards Israel.

Israel’s policy is one of providing generous relief, but not permitting any refugees into Israel.  In the last weeks the level of assistance has increased with transfers done nightly, including food, clothing and medicine.  My understanding is that rebels have never interfered with this transfer of assistance to civilians.

Israel is attempting to set up a safe zone for the refugees in Quneitra province, which is adjacent to the Golan.  There are tents in the area for them, although it is not clear to me that there are nearly enough. 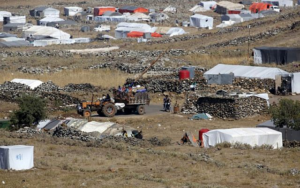 Last Friday night, six wounded Syrians — including four orphaned children who lost their families in the fighting — were transported to Israel for medical treatment.

You can see here the response of one Israeli nurse:

This week additional wounded were brought in for treatment.

But the situation grows more serious as there is concern about Syrian troops approaching our border.  We have made it exceedingly clear that if those troops, in pursuit of the rebels and in an attempt to seize their territory, enter the demilitarized zone that exists between Syria and Israel, they will be shot.  This zone was established as part of the 1974 armistice agreement after the Yom Kippur war.