From Israel: Strength of a Nation

“Strength of a Nation”

At 8 PM, the siren sounded, calling everyone to stop in respectful silence. 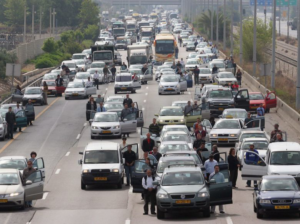 Tomorrow the siren will sound yet again. Visitors will flock to the military cemeteries of the country, to honor the memory of relatives, friends and comrades in arms who have been lost. 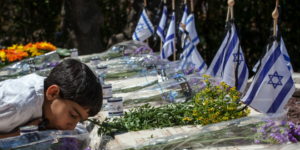 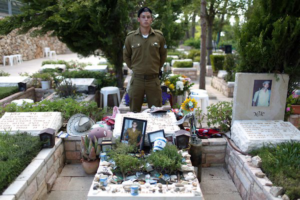 The pain is sharp.

But there exists an understanding that reaches to the core of the nation and binds us together.  How profound are the sacrifices that have been made: they have given their lives so that the nation of Israel might live.

It is an inescapable reality: should we lay down our arms, there would be no more Israel.

Our young people serving the nation understand this.  Their readiness to assume their roles gives them a gravitas and a maturity beyond their years.  It also gives them purpose.  It is a dubious blessing, to have nothing worth dying for.

We are called upon to remember those who have given their lives and to acknowledge the immeasurable debt we owe them.

We pray for the safety of all in the IDF.  May the Almighty watch over them, always.

We have another obligation as well: to defend the IDF from false and libelous charges intended to undermine our State and weaken the morale of our soldiers.

Prime Minister Netanyahu did this very well this past week, and I applaud him for his stand. 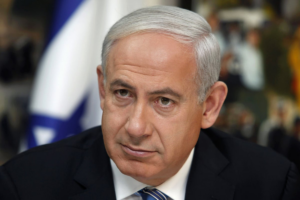 This is a story about a subversive Israeli NGO called “Breaking the Silence” and German Foreign Minister Sigmar Gabriel.

“Breaking the Silence” ostensibly is a group dedicated to “improving” the moral stance of the IDF by bringing former soldiers to speak at various locales outside of Israel, accusing the IDF – the most moral army in the world – of committing war crimes.

But consider for a minute: why would this group bring speakers to defame Israel’s soldiers outside our borders?  If they were sincere in wanting to “improve” the behavior the IDF, they would make their case inside of Israel and work towards reform.  Their motive is destructive. They utilize anecdotal information that has not been verified, but which is embraced readily by those who love to hate us.

This group, like a number of others, is funded in large part by foreign governments, both directly and indirectly.

I wrote about this situation some months ago, when a law was passed requiring funding transparency of groups who receive a majority of their donations from foreign governments.

In my opinion, and the opinion of many here, this law did not go far enough, as it did not require such NGOs to declare as foreign agents, even though the stark reality is that they function according to the agendas of their foreign funders.

“Breaking the Silence” receives its funds in large part, directly and indirectly, from the EU itself and individual EU countries. NGO Monitor confirms that Germany is one of the countries that funds this group.

Last week, German Foreign Minister Gabriel came to Israel, and was supposed to meet with our prime minister.  He declared intention, however, of also meeting with “Breaking the Silence,” at which point, Netanyahu informed him that it was one or the other:

“Netanyahu’s policy is not to meet foreign visitors who, on diplomatic trips to Israel, meet with groups that slander IDF soldiers as war criminals,” read a statement from the prime minister’s office. (Emphasis added here and in quotes below.)

“Diplomats are welcome to meet with representatives of civil society but Prime Minister Netanyahu will not meet with those who lend legitimacy to organizations that call for the criminalization of Israeli soldiers. Our relations with Germany are very important and they will not be affected by this.”

Gabriel nonetheless met with “Breaking the Silence,” and Netanyahu then cancelled their meeting.

Netanyahu expressed the further opinion that it was “extremely tactless for such a meeting to take place at this time.”  He was referring to Holocaust Remembrance Day, which occurred last week.  Nor should the irony be lost that it was an official of Germany who was lacking in this tact.

Caroline Glick, in writing about this, referred to the prime minister’s new “strategy of demanding that Europe treat Israel in a manner that accords with diplomatic norms.”

And this was the message of Herb Keinon in his JPost commentary – “Netanyahu’s muscular diplomacy”:

Netanyahu, he says, receives “frequent messages from international leaders about what they can learn from Israel…that has reinforced a real sense in his mind that it is not only Israel that needs the countries of the world, but that these countries also need Israel – and not only the developing countries…but also the super-developed countries in Europe.”

“People respect you when you stand up for yourself.  We had a situation here which [was] not in accord with normal behavior between states, certainly not between allied democratic states.”

Netanyahu has acted similarly in the recent past: for example, when the prime minister of the Ukraine was disinvited after his country had supported UN Security Council Resolution 2334.  And looking forward, we’re going to be seeing more of the same.

Until now the world has assumed it could treat Israel as it would treat no other sovereign nation, but that is changing.

How welcome this is, as Israel develops a new sense of her own worth.

I wrote last week about an upcoming UNESCO vote, which is even more severe than what I had alluded to.  The vote by the executive board in Paris expected on Tuesday – which is Yom Ha’atzmaut, Israel Independence Day! – will deny that Israel has any sovereignty in Jerusalem at all, not even in western Jerusalem.  It is anticipated that European members of UNESCO will either vote for this resolution or abstain.

According to Israel’s Ambassador to UNESCO in Paris, Carmel Shama-Hacohen, “A significant and active partnership has emerged between the Europeans and the Arabs to design an Arab document that is anti-Israeli and anti-Jewish, that rejects Israeli sovereignty in Jerusalem and harms our holy places.”

Should we be surprised? Our EU friends, with their growing Muslim populations.  We will have to await the outcome.

On the other hand, a letter has been sent to UN Secretary-General António Guterres that was signed by all 100 members of the US Senate.  Written by Marco Rubio (R-FL – pictured) and Christopher A. Coons (D-DE), it protests as “unacceptable” the “continued targeting of Israel” in the UN. 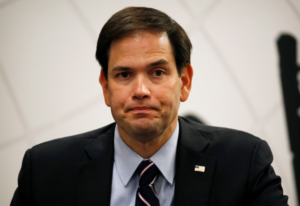 “Through words and actions, we urge you to ensure that Israel is treated neither better nor worse than any other UN member in good standing,” the letter said, calling for a number of reforms.

Among the UN agencies singled out for criticism is UNESCO, whose members “continue to advance measures that target Israel and deny the Jewish and Christian connections to Jerusalem.” 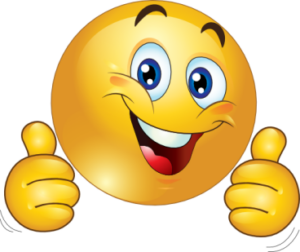 The day is officially “Memorial Day for the Fallen Soldiers of Israel and Victims of Terrorism.”

“Since the beginning of the modern Jewish movement in the Land of Israel in 1860, a total of 23,544 have died defending the State of Israel, including those fighting with pre-state defense forces, IDF soldiers, the Shin Bet (Israel Security Agency), the Mossad, police officers, and officers of Israel’s Prisons Services…

“According to the National Insurance Institute, there are a total of 9,157 bereaved parents in Israel, thousands of bereaved siblings, 4,881 widows and 1,843 orphans under the age of 30. In addition, 3,117 civilians have been killed in hostile acts such as terror attacks since the birth of the State of Israel, including 122 foreign nationals and 100 Israelis killed in attacks abroad.”

“Over the past year, another 97 soldiers and officers serving in Israel’s security forces, including 37 wounded veterans who succumbed to their wounds, have joined the ranks of Israel’s fallen…”

A prayer for the welfare of the soldiers, IDF Cantor Shai Abramson: