From Israel: “Stand Ever Tall and Proud, Israel!!”

I celebrate Israel on Yom Ha’atzmaut – Israel Independence Day.  And I invite each of you, my friends, to join with me. 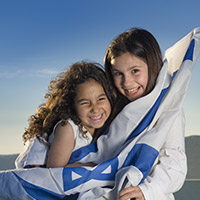 Israel is 71 years young today. How far she has traveled in the course of those years!  When we consider the obstacles that have been overcome, it is clear that Israel is a miracle.

Our population stands at 9,009,000; over 74% are Jews; 21% are Arabs, both Muslim and Christian; the remainder are non-Arab Christians and members of other ethnic groups.

In 1948 there were just 806,000 people in Israel, which means we’ve seen a growth of more than ten-fold. Back then, just six percent of the Jewish population of the world was here.

Today, 45% of the world’s Jews live in Israel.  We do not believe it will be long before more than half of the world Jewish population is here.

Over the years, 3.2 million immigrants have moved to Israel – we truly are a nation of immigrants.  Jews from over 70 countries have made their home here since 1948.  This creates a uniquely diverse and rich culture – which is one of Israel’s strengths. 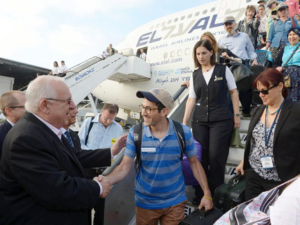 Israel has so very much to offer:

We rank 11th in the world for overall happiness, with 88.6% of Israelis saying they are pleased with their lives.  This is not a reflection of material comfort, so much as a sense of purpose and belonging.  Israeli culture is non-authoritarian and informal.

Because we are a small country, there is a feeling of connectedness. Family is highly valued and our society is child-oriented.

We are a healthy people: According to National Geographic Travel, we rank fifth for healthy longevity (i.e., sustaining a healthy lifespan); while on the 2019 Bloomberg Healthiest Country Index, we are ranked 10th. One study finds that we have the lowest rate of diet-related deaths in the world.

We have an absolutely extraordinary army.  This is not just because the IDF is top-notch militarily, but also because it demonstrates a special caring.  Is there another armed force in the entire world that makes room for autistic people and those with other disabilities, so that they can contribute and feel valued?  This caring is a reflection of the value system of our society.

See this short video, and it will be clear:

There are thousands of lone soldiers in Israel: young people who come, without family, to serve in the IDF.  That itself is pretty special.  But here I want to share the story of one particular soldier:

Nissim Sean Carmeli had made aliyah from Texas without his parents at a young age, staying with two sisters who lived here. When he finished high school he joined the Golani Brigade (and was technically a lone soldier because his parents were not in the country).

He was killed in July 2014, during the last Gaza war, when his armored personnel carrier was struck by an anti-tank missile.

The organization “One Family” – which assists families bereaved because of war or terror – put something on its Facebook page regarding concern that he would not have many mourners at his funeral. Because Sean had been a big fan of the Maccabi Haifa soccer team, the team then put up on their Facebook page a request that fans attend.

Thousands came.  The estimate was 20,000.  And I stop here to ask if there is any other country in the world where 20,000 people would come to honor a dead soldier whom they did not know, and accompany him to his final resting place.

Later, a song was written about this.  You can see video of the funeral, and hear the song, here:

We are an extremely well educated and accomplished people:

We have a literacy rate of an incredible 97.8% for people over 15, and have the highest number of engineers and scientists per capita in the world.

Israel ranks third among OECD countries for the percent of its population that has attained higher education. Twelve Israelis have been awarded Nobel Prizes.

Here you see Ariel University in the Shomron, which is about to open a new medical school:

Israel has more than 230 museums, considered to be the highest number per capita in the world.

Israel has the highest number of startups per capita in the world. We rank fifth overall on the 2019 Bloomberg Innovation Index, and first in the R&D Intensity category.

There are more than 40 national parks in Israel, ranging from archeological sites (the archeology here is beyond incredible!) to places of natural beauty (also incredible). I will add that many of these sites have been made handicap-accessible. 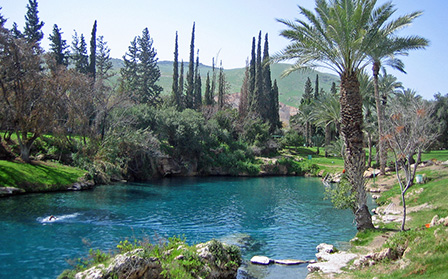 Israelis are nature lovers, and out enjoying the beauty of the land whenever possible.

We have an excellent medical system, with top-flight care.  Just one example: Some 81% of patients in Israel undergo life-saving emergency cardiac catheterization within 12 hours of the onset of symptoms. In the US, by comparison, 70% receive this level of care.

Numerous Israeli medical innovations and research endeavors are world-class: Israel is at the forefront with regard to recent developments in cancer research, clinical trials, detection methods, and new therapies. Israel developed the Emergency Bandage, which stops wounds from hemorrhaging and ReWalk exoskeleton, which allows paraplegics to walk.

With all of this said, I have not yet alluded to Israel’s extraordinary capacity to lend assistance – medical, technological, etc. – to people and nations around the world. It is a role we take very seriously and fill superbly well.

[] We have enabled poverty-stricken African villages to improve their agricultural yield by teaching the people about water-saving drip-irrigation.

[] Israeli technology has made it possible for kids in places such as Sierra Leona to have access to pure drinking water.

[] During the Syrian civil war, which took a huge toll on Syrian civilians, we clandestinely brought children, often in the company of a parent, into Israel for important – sometimes life-saving – medical care and then helped them to slip back into Syria.  This was Operation Good Neighbor. We even established a birthing clinic right at the border for Syrian women with nowhere else to go.

If this was not extraordinary, I don’t know what is.  Many Israeli medical personnel spoke about how good it felt to be helping.  And keep in mind, the Syrian government is hostile to us. 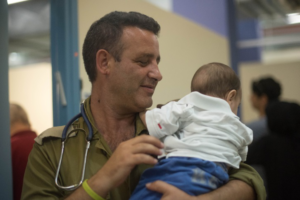 [] Here in Israel, we have Save a Child’s Heart, which provides critical cardiac care to children from all over the world, brought here because they would not have access to the care they need at home.  The lives of some 5,000 children from some 50 countries have already been saved, without regard to race, nationality or religion.  The doctors donate their services.

Additionally, we are first on the scene with emergency assistance when catastrophes occur in different parts of the world. Our emergency medical field hospitals are recognized as second to none:

All of this is simply a quick snapshot of who we are: I could go on, and on.  And actually, I would like to go on and on. But I will not.  Instead, I ask you to share this, very broadly.