From Israel: So, the World is Crazy

Most of us have known this for some time, but the hysteria about the declaration by President Trump that Jerusalem is the capital of Israel brings this reality home to us all over again.

That Palestinian Arabs would react vehemently (and I’ll get to that below) was a given, and that even so-called moderate Arab nations — Saudi Arabia, Jordan, Egypt, etc. — would strongly criticize the president was only to be expected.

But look at the line-up that includes: France, Germany, Sweden, Italy and the UK, as well as the EU, Russia, etc. etc.

Incredibly, EU foreign policy chief Frederica Mogherini declared that the Trump declaration “has the potential to send us backward to even darker times than the ones we are already living in.”

There is an inherent lack of logic in the position routinely embraced by these nations and the EU:  They insist that recognizing Jerusalem as Israel’s capital is premature because this issue must be resolved via negotiations. And besides, they insist, Jerusalem must be the capital of both Israel and a Palestinian state.

That is to say, they have no trouble prematurely advancing a scenario that has not been determined via negotiations, as long as it is their scenario.

It is being reported that French president Emmanuel Macron is going to try to convince Trump to reverse his decision. A fool’s errand if ever there was one.

Bret Stephens had an excellent piece – “Jerusalem Denial Complex” – about this situation in the NYTimes on Friday (all emphasis added):

In this context, the ultimate piety for Stephens is that “pretending it isn’t what it is can be a formula for anything except continued self-delusion.”

But he fingers other pieties as well:

That “only an Israeli-Palestinian peace deal could reconcile the wider Arab world to the Jewish state,” when the fact is that “relations between Jerusalem and Riyadh [Saudi Arabia], Cairo [Egypt], Abu Dhabi [UAE] and Manama [Bahrain] are flourishing as never before, even as the prospect of a Palestinian state is as remote as ever.”

And that that “intensive mediation by the United States is essential to progress on the ground. …recent American involvement…has had mostly the opposite effect: diplomatic failure, followed by war.”

This recognition will have no effect on whether or not a Palestinian state comes into being: that will happen when the Palestinians “aspire to create a Middle Eastern Costa Rica — pacifist, progressive, neighborly and democratic.”

But the “recognition does several genuinely useful things…

“For the international community, that means helping Palestinians take steps to dismantle their current klepto-theocracy, rather than fueling a culture of perpetual grievance against Israel.”

ent to pass by truth, totally suppressing it, in order to serve what they see as their self-interest?

Here I merely pose the question. 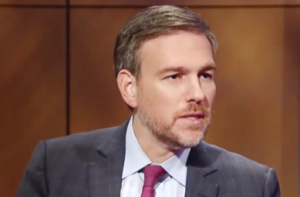 Of course, before the nations of the international community can help the Palestinian Arabs renounce their illusions, they must first renounce their own.

The position of the leaders of the EU and various western European nations is fueled by a number of factors, including their large Muslim constituencies, and their endemic anti-Semitism.  As they have babbled on about Palestinian Arab rights, I have many times wondered:

Have they—totally skirting historical and legal facts, as well the reality on the ground—actually convinced themselves of the truth of their positions. Or are they cont

And precisely what did Trump do to incur such anger?  He stated the obvious, is what he did.

But look: At the same time that he recognized Jerusalem as the Israeli capital, he also called for sustaining the status quo on the ground and held out hope for that “two-state solution” (which in theory includes the possibility of a shared Jerusalem down the road).

Australia, while not supporting Trump’s move, was more circumspect than western European nations in its response to it.  Foreign Minister Julie Bishop, a friend to Israel, merely said that she was concerned by any unilateral action by either side that might add to tensions.

So was Canada’s response subdued, with the Canadians declaring they wouldn’t be moving their embassy.

The nation that has been most truly supportive, to date, is the Czech Republic, traditionally a friend to Israel.

President of the Czech Republic Miloš Zeman declared that now that the American president “proceeded in accordance with his election promise,” he is “truly happy.”

He further indicated that after the American embassy is moved, his nation would be happy to follow suit.”

Israeli officials, speaking on condition of anonymity, have indicated that the Philippines is ready to move its embassy, and Hungary is giving this serious consideration as well.

It does seem that the predictions regarding Palestinian Arab violence being short lived are proving to be true.  On Friday, the Muslim sabbath, an estimated three thousands rioted; some 100 were injured, most lightly, and three killed.

Saturday, only hundreds came out.

The fact that there is nothing to be gained by the rioting is certainly a factor.  Undoubtedly this has dawned on their “leaders” who routinely fall back on incitement as a substitute for diplomacy.

Already meetings are being called to discuss how to proceed from here – this is true both of Fatah, which represents the great majority of the PA, and the PLO

But the cautious position of Israel over these past few days is another major reason why the rioting has not been more intense even in the short term:

While IDF troops were reinforced to respond to any violence that might occur, the Temple Mount remained open to Muslims for prayer on Friday and there were no changes on the ground.

Maj. Gen. Yoav Mordechai, who serves as the IDF liaison with the PA, posted on his Arabic Facebook page on Friday:

“The status quo in Jerusalem in general and Al-Aqsa in particular is being preserved. Don’t listen to extremists’ incitement and calls for violence…” 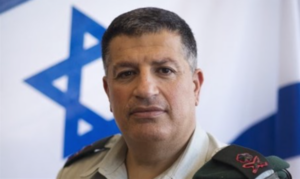 The worst incitement to violence will come from Hamas, which is currently in a battle with the PA regarding their control of weapons and military forces so that the “resistance” can be maintained.

Friday and Friday night, three rockets were launched from Gaza into Israel.  One apparently fell in an empty field, one was intercepted by the Iron Dome, and one hit in Sderot – damaging some cars but causing no injury.

And here, as an aside, an interesting piece of news with regard to Hamas.  Yesterday, a month and a half after destroying an attack tunnel belonging to Islamic Jihad, the IDF destroyed a major kilometer-long attack tunnel that had been constructed by Hamas.  This one, too, originated in Khan Younis and extended hundreds of meters inside of southern Israel. The exact location is not being revealed, but it was said to be a kilometer from the nearest Jewish community. 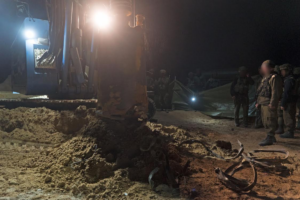 I see in this situation exquisite irony:

The Reform Movement in the US has been registering furious indignation about the “failure” of the Israeli government to give them their alleged rights at the Kotel – in terms of an enlarged equalitarian plaza, participation on a committee to administer that plaza, etc.  After all, went the argument, the Kotel belongs to all of the Jewish people.

However…this past week, the Reform Movement came out against Trump’s declaration.  Rabbi Rick Jacobs, head of the Union for Reform Judaism, said, yes, the movement believes Jerusalem is the eternal capital of the Jewish people and of Israel, but the US embassy should not be moved there until after a comprehensive peace agreement has been reached.

This position has not gone over very well here in Israel.  Dani Dayan, Israeli Consul in New York, called Jacob’s statement “deeply frustrating and disappointing because Jerusalem is the uniting force of the Jewish People.”

“The Reform Movement…has ceded sovereignty over Jerusalem to the Palestinians. They, and only they, have the right to decide if and when anyone else recognizes the city as Israel’s capital. Absent Palestinian consent, Israel isn’t entitled to have a recognized capital.”

It didn’t go over very well in the Oval Office, either.  The annual White House Chanukah celebration was held this past Thursday night.  Along with others such as JStreet, the Reform Movement was excluded from the list of those invited.

We know that Netanyahu will not be warmly welcomed. The JPost this morning referred to his travelling to the “lion’s den.” Perhaps you have observed that western Europe is prepared to  vent anger at the Israeli prime minister for a statement made by the American president.

I have no concerns about the ability of our prime minister to hold his own in this atmosphere, however.  On boarding the plane, he declared (emphasis added):

“While I respect Europe, I am not prepared to accept a double standard from it.  I hear voices from there condemning President Trump’s historic statement but I have not heard condemnations of the rockets fired at Israel or the terrible incitement against it.

“I am not prepared to accept this hypocrisy, and as usual at this important forum, I will present Israel’s truth without fear and with head held high.” 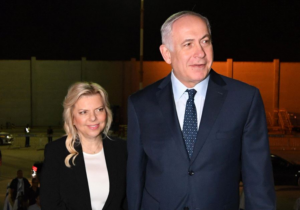