Or so I would have thought.

Yet, in America today, this is what we see:

The federal government designated CAIR an un-indicted terror co-conspirator in 2007 in the prosecution of the Holy Land Foundation and others for providing support to violent Hamas jihadists.  Ghassan Elashi, a founding board member of CAIR’s Texas chapter, was convicted of laundering money for Hamas terrorism. CAIR’s civil rights director Randall Todd Royer trained with the al Qaeda-linked jihad group Lashkar-e-Taiba and was convicted of conspiring to engage in terror activities.

Apparently, all of this is of no concern to FYD, but we shouldn’t be surprised.  After all Congresswoman Ilhan Omar (D – Minn.), who spoke at a CAIR fundraiser, recently described CAIR as an organization founded to protect American Muslims from Islamophobia after 9/11:

“CAIR was founded after 9/11 because they recognized that some people did something and that all of us were starting to lose access to our civil liberties.” 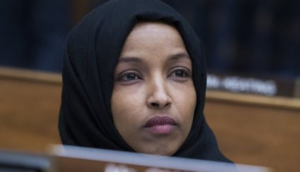 It was bad enough that she referred to the terrorism perpetrated by Muslim jihadis – which took 3,000 innocent American lives – as “some people did something.” But she also misrepresented the founding of CAIR, which came into existence in the 1990s.

There were people – some of them progressive Jews and all of them Democrats – who actually praised Omar for her words, because she purportedly spoke bravely for Muslim Americans. I myself gag on this sort of blind hyper-political correctness.

Omar has been marked as an anti-Semite who has drawn on classic anti-Semitic themes in comments she has made, so none of this should surprise us.

Then, too, Omar has the companionship of another anti-Israel, anti-Semitic Muslim Congresswoman, Rashida Tlaib (D- MI), who has just made what may be the worst comment of all:

Thinking of the Holocaust, she declared, always gives her a “calming effect” because she knows that her ancestors gave the Jews “safe haven” although at tremendous cost to themselves (the Palestinian Arabs).

The Arabs in Palestine right after the Holocaust did everything in their power to prevent the Jews from being there.  It is an outrage – an enormous reversal of historical truth – to describe the atmosphere they generated as a “safe haven” for Jews.

And notice, please, how in her version of events the Arabs were the ones who suffered. 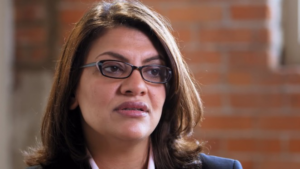 But wait, I’m not done yet.

Speaker of the House Nancy Pelosi – weak, ineffective, and lacking the courage to do what is right – invited one Imam Omar Suleiman to give the opening prayer in the House earlier this month.

And who is Imam Suleiman?

“God willing on this blessed night as the 3rd Intifada begins, the beginning of the end of Zionism is here. May Allah help us overcome this monster…”

In 2018, he tweeted that the tide in the fight for Palestinians “is turning.”

“There is no longer one side dominating the political discourse in America. In the last month, we heard from newly-elected congresswomen Ilhan Omar and Rashida Tlaib openly express their support for BDS and Palestinian rights.” (Emphasis added)

So there we are.  I watch all of this from Jerusalem and I am horrified.  What, I ask myself again and again, has happened to the America that I knew?

“The Democratic Party as a whole is galloping to the left. And one of the components of that is that the extreme left has a long history of anti-Semitism, anti-Israel hatred. We’re seeing it with this freshman trio [Rasida, Tlaib, and Congresswoman Alexandria Ocasio Cortez (NY – D)]…who keep expressing anti-Semitic, anti-Israel comments.

“In the House of Representatives the Democratic party as a whole, the leadership as a whole, is unwilling to distance themselves from these radicals.” 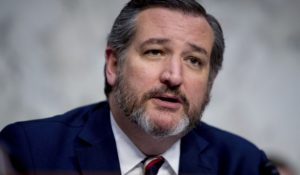 There was a time when American Jews declared with full confidence, “It can’t happen here.”  But we see now that it can!!

What grieves me deeply is the fact that many progressive American Jews close their eyes to this reality, and will, in spite of everything, continue to vote Democratic.

I want to cry, “Wake up!” but they wouldn’t pay attention to Senator Cruz and they most certainly wouldn’t listen to me.

Actually, America is quite schizoid right now.  The flip side of the devotion of Jewish progressives to the left-wing Democratic Party is a passionate, destructive and irrational hatred of President Donald Trump.

This too is cause for grief: It is an obsession known as “Trump Derangement Syndrome.” Everything bad that happens is Trump’s fault; Trump must be brought into every discussion, political or otherwise; and every effort must be made to bring him down, no matter the cost to the nation.

Those suffering from this derangement seem unable to separate Trump’s sometimes bombastic style from his genuine accomplishments.

I have reservations about the “Deal of the Century,” and may yet speak out against it – I have already indicated that I think his team is well-intentioned but essentially naïve about the situation here.

But I salute him for a great deal that he is doing: For moving the Embassy to Jerusalem and recognizing the Golan Heights as part of Israel; for backing Israel entirely in the fight with Hamas; and taking a tough stance with the Palestinian Arabs. (I thought it was great that Hanan Ashwari was not permitted into the US this week; that’s small stuff – but delivers a message.)

I love it that he has some fantastic people – Mike Pompeo, John Bolton, David Friedman – working with him; and that he is tough-minded and cannot be threatened.

And I was delighted at the no-nonsense way he took on Rashida Tlaib with regard to her Holocaust statement: “She obviously has tremendous hatred of Israel and the Jewish people. Can you imagine what would happen if I ever said what she said, and says?”

Most importantly, the president recognized the dangers of the Iran deal that the Obama administration had negotiated. He walked away from it, and instituted sanctions on Iran to apply enormous pressure.  Now he is refusing to back off from Iran’s military threats – it is essential that he stand strong.

Those with Trump derangement will never acknowledge the debt the world owes to Donald Trump for taking on Iran.  Until he took office, the Iranians had the upper hand and their plans were malign and dangerous in the extreme. 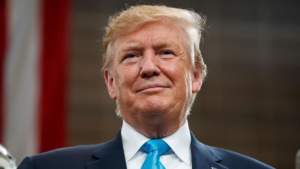 And so, here, too, I want to cry to progressive American Jews, “Get real!  See what’s happening.”

But there is no point in even trying. Although it would not hurt, my friends, if you shared this broadly.

I will post again in short order, returning to issues here in Israel (where matters are hardly easy); I will also likely have a good deal more to say about Iran.