From Israel: Hysteria and Skewed Thinking

My friends, it’s mid-August and I would dearly love to take a very peaceful vacation, and just spend time with my grandchildren.

I had no desire to write about the events at Charlottesville as they unfolded. 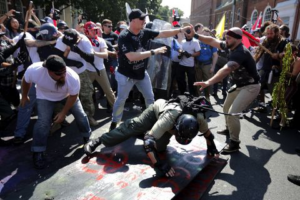 But here I am, about to do so: the hyper-inflated responses to what has occurred, the distortions of reality, impel me.

For starters, I want to make it clear that I am no fan of President Trump’s sometimes garbled style.  I have been known to mumble to myself, as you have likely mumbled to yourselves: “Did he just say that?”

Quite simply, he sometimes gets in his own way – his statements can be convoluted, unclear, lacking in precision. But perhaps, sometimes, his critics choose to misunderstand him, without taking the time to read him carefully.  They gleefully pile on.

I found the import of Trump’s statements – over a two or three day period – to be on the mark, and I want to explain why I think so.  I would not take the time if I did not consider it important.

Although this should be completely obvious and I should not have to write this – I also want to make it clear that I find neo-Nazis and the KKK abhorrent in the extreme. In writing this, I am in no way excusing them. 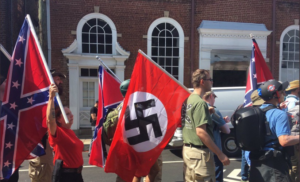 The symbolism of the swastika – the vile Jew hatred inherent within it — generates a visceral response in all decent people.  Swastikas in America in 2017?  People are rightly horrified. However, that very heated visceral response sometimes impedes the ability to assess the situation in broader terms.

The point here is that there is a broader context, and Americans ignore it at their own peril.

Trump’s first statement on the Charlottesville crises erred in that it was not tough enough, in very specific terms, regarding the abhorrence that he and other Americans feel when witnessing a display of swastikas.  This, he should have said, is offensive in the extreme to Jewish Americans and all who care about security for American Jews.  What is more, the presence of the KKK alongside the neo-Nazis should have been addressed in the same terms with regard to the dignity and security of all black Americans.

What Trump did say is that there was fault (for the violence) on both sides.  And on this he was correct.

I share here a video clip of portions of Trump’s statement at a press conference subsequent to his original statement: 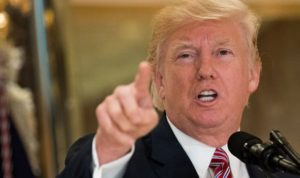 Let me expand on his statement in order to clarify his major points within what I understand of the broader context:

[] An “alt-right” group came to Charlottesville to protest the fact that a statue of General Lee was to be taken down.  Some of them were not neo-Nazis or KKK at all, says Trump, they were there to register a protest, which was their right.

What I do know is that the group had a permit to demonstrate, and that their right to do so was defended by the ACLU.  It is a mark of free speech – which until recently (I’ll get to that) has been a revered principle in the US – that even those who say things with which we might vehemently disagree must still defended in their right to speak.

[] Trump says that the group had a right to protest what they perceived as an attack on their cultural history, represented in this instance by Lee.  We cannot re-write history, he says, we can only learn from it and move forward.  He suggests that it is a dangerous thing to attempt to do that re-writing, and I think he makes his point as he suggests that maybe, in line with this thinking, we should also take down statues of George Washington, who was a major slaveholder, because we now disapprove of slavery.

But let us move beyond that.  The violence, says Trump, came about because a second group, some of its members armed with clubs, came to stir things up.  That group, dubbed the “alt-left,” was composed of members of the Antifa (anti-fascists) and Black Lives Matter.  They had no permit.

The president is correct. Had the extreme leftists not come, there probably would have been a protest about the removal of the statue, and it would have been done.  The confrontation was provoked by the other side.  In the violent melee that ensued, there was culpability on all sides.

Yet, the president, in making this statement, was accused of making excuses for the far right.

What I see is that there is a PC tendency in the nation to soundly criticize the far right, while cutting slack for those on the left.  And Trump has refused to play this PC game.

I speak in my post title about “Skewed thinking,” and here it is.  The far left group, specifically the Antifa, is nominally opposed to fascists.  Therefore, since we hate Nazis, they must be the good guys in this equation. Right?  Wrong.

I read an opinion piece on Friday that demonstrated this thinking.  “The enemy of my enemy is my friend,” declared its author.  I’m sorry, but this is drivel.  I’ve seen the same very erroneous thinking in another regard:  In certain quarters those who combat ISIS – seen as the ultimate enemy – are embraced as friends.  It was in part for this reason that Obama embraced Iran.  But this is dangerous.  ISIS and Iran are both enemies, and if anything, Iran is the far more dangerous.  Cutting Iran slack because it will weaken ISIS is a huge mistake.

The parallel with what happened in Charlottesville is apt.

The Antifa is anarchistic, anti-democratic and prone to violence.  They undercut the fabric of American society.  And their numbers are growing.

Caroline Glick addresses this issue in her most recent column, “Trump and the Jews,” (emphasis added):

[Jeffrey Goldberg, editor of the Atlantic], “who underplayed and denied what can at best be called Obama’s diffident response to anti-Jewish violence, has been leading the charge against Trump.

“Among other things, Goldberg likened the counter-protesters at Charlottesville to the American soldiers who stormed the beaches at Normandy.

“In Goldberg’s conflation of neo-Nazis with real Nazis and the far-left counter-protesters in Charlottesville to US forces, we see the real issue at the heart of the maelstrom now dominating US public life.

“The real taboo Trump broke in his remarks following last weekend’s deadly riot was not his equivocation about the relative badness of the neo-Nazis. His real offense was his insistence that the counter-protesters – the ones Goldberg and his colleagues liken to World War II partisans and Allied forces – were also violent.

“And yet they were. And Goldberg and his colleagues know they were.

In an ironic twist of history’s knife, the day of the riots, the September issue of The Atlantic monthly, where Goldberg serves as editor, hit the newsstands. The cover story, written by Peter Beinart, one of the stars of the American Jewish Left, was inconveniently titled, ‘The rise of the violent Left.’

“Beinart’s article chronicled the violence and lawlessness of Antifa, the radical group that organized the counter-protest in Charlottesville. Antifa is a group of radical goons who stand behind the violence that has plagued US college campuses for the past several years. All the violent protests – from Vermont to California – where conservative speakers were blocked from addressing students by rioting students who burned buildings and assaulted their fellow students who wished to attend the lectures – were Antifa productions.

“And Antifa’s operations go well beyond the walls of campuses. As Beinart notes, it was Antifa rioters who physically assaulted Trump supporters as they walked to their cars at the end of a Trump rally in San Jose, California, last summer.

“The purpose of Antifa’s violence is not merely to deny freedom of speech to those whose positions it opposes. It is also to prevent normal relations between Democrats and Republicans and between progressives and conservatives.”

And so who is a greater threat to American society?

I have been monitoring what has been happening in America with a sinking heart.  Where have been the wide scale protests in the name of democracy and free speech, when one conservative speaker after another has been shut down by violence and threats of violence?  And why no wide-scale expressions of distress that democracy is threatened when supporters of the president are physically accosted?

Wake up, America, before it is too late.  And be thankful that you have a president who refuses to be politically correct and will not be silenced.