From Israel: “Forcing Them to Their Knees!”

It is not because it is unimportant that I have not written about President Trump’s challenge to Iranian threats.  It is of critical importance. I have simply been focused in a variety of other directions.

On Friday, however, Ruthie Blum wrote an excellent column, “Bringing Iran to its knees,” in the JPost.

I believe it is important to read her description of the craven, positively revolting diplomatic stance of the Obama administration (and of former secretary of state John Kerry in particular) with regard to Iran, and the current reversal by President Trump. 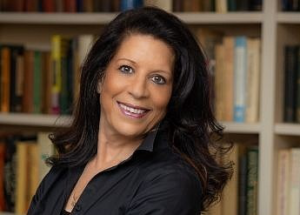 Blum alludes to “one Channel 13 report that got drowned out [but] is worth highlighting. According to the report, anonymous Arab intelligence sources claimed that…fierce debate has been taking place between Iranian officials pushing for attacks on American and Israeli targets and those opposed, on the grounds that doing so would be suicidal.

“This is key to understanding why the Trump administration’s tough stance is more likely to prevent a war than spark one. Obama’s appeasement of the ayatollahs did not cause Iran to put aside all nuclear ambitions or give up on its goal of global hegemony.  On the contrary, it emboldened the evil regime…”  (Emphasis added)

On the same page of the JPost on which Blum’s column appeared there was a column by Post editor Yaakov Katz, “Iran, North Korea, and the lessons of 2007.” It also touches upon the issue of Trump and Iran.

Taking a different tack, he describes the reluctance of then president George W. Bush to bomb the reactor being built in Syria, in spite of solid Mossad evidence of its existence. This led to Israel doing it alone. 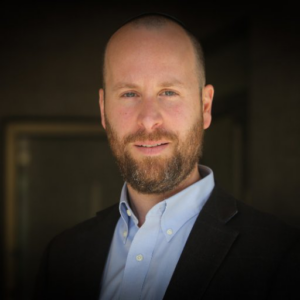 Katz’s point here is that Syria’s reactor was being developed with the direct involvement of North Korea.

But, “North Korea was never made to pay a price for what it did in Syria…

“Indeed just the opposite occurred.  As part of an effort to salvage nuclear negotiations in 2008, the Bush administration removed North Korea – after 20 years – from the State Department’s list of countries that sponsor terrorism…

“This is an important story to remember…

“In 2007, North Korea learned a bad lesson.  By not being made to pay a price for proliferating nuclear technology to Syria, the rogue country believed it could do anything – like continuing to work on its own nuclear program…

“…What Trump is trying to do now is to make sure Iran does not learn the same lesson.” (Emphasis added)

All of this is important as it helps us understand what underlies Trumps strategy with Iran.  It heightens our recognition of the debt we owe Trump for his readiness to stand tough.

But we can extrapolate from the lessons to be learned regarding Iran to the issue of how Hamas is handled. The situations are parallel. Put simply:

Unless we stand tough with the leaders of Hamas and Islamic Jihad, they will never learn the all-important lessons we want them to learn.  Rather, they will draw the conclusion that ultimately they can get away with whatever they wish.

I cannot emphasize this enough.

And this brings me to what happened at the Gaza fence on Friday.

What happened was nothing. NOTHING?

That is correct: The Hamas leadership cancelled the demonstrations/riots.  These are the riots, originally scheduled as an extension of “Nakba” day, that we had anticipated would be fierce and difficult.

The reason provided for the cancellation was that this was necessary because of the Ramadan fast and the hot weather.

But wait!  Wednesday was hotter than Friday, and on Wednesday it was also Ramadan.  But on Wednesday, the demonstrations took place.

So what was going on?  On Wednesday, there were 350 “ushers” on the scene, attempting to keep the demonstration quiet. But it didn’t work.  My guess is that Hamas, anticipating that Friday would end up being more violent than Wednesday had been, felt matters were out of control and was very nervous.

I have no solid information on this, but my gut tells me (this simply had to be the case, as it would have been terribly foolish not to do this!) that we had sent a message via Egypt telling Hamas that if they promoted violence that interfered with Eurovision, we would, in effect, come in and blow some heads off.

My intuition – my entire sense of the situation – tells me that they backed down because we talked tough without qualifiers. Other well informed individuals with whom I have discussed this agree.  I hope that was the case, and that the result provides very serious food for thought.

And so, thankfully, Eurovision, which is now over, passed without violent incident.

Because I wrote about Madonna the other day, praising her for readiness to come to perform in spite of the pressure put on her, I mention here that her performance included two dancers with flags on their backs – one Israeli, one Palestinian. She was roundly criticized for this: Eurovision is apolitical and the dancers with flags had been included without official permission (apparently slipped in after rehearsals).  It did not upset me when I read about this because it seemed a bid for peace, and not an anti-Israel statement. 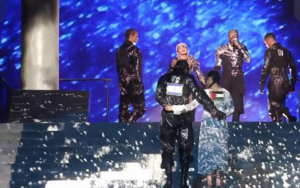 The BDS-supporting punk rock band Hatari from Iceland was another story, however. When they were on screen awaiting the announcement of their score, they unfurled banners that said “Palestine” and included the Palestinian flag. Punitive action may be levied against them by the European Broadcasting Union, which oversees the show.

And they received no plaudits from a BDS group that roundly criticized the band’s willingness to perform in Israel, instead of honoring a total boycott.  Holding up the banners, they said, was just a “fig leaf gesture” by the band.

Just a few comments on the extravaganza:  I watched a bit of it on Thursday evening ONLY because I wanted to see Shalva (which I will get to), and was, quite frankly, horrified at the low level of what passed for music. In the main, it was glitz – dancing girls, flashing lights, and all the rest, covering for some very mediocre performances. This was definitely not the case with Israel’s entry, Kobi Marimi, (below) who delivered a straightforward and feeling performance, and less so with the Netherlands’ winning performance. 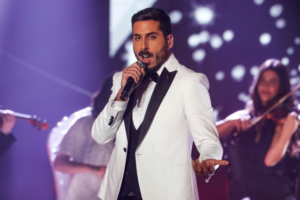 I am being told that this – the raucous glitz – is how it is now, but what I see is a serious deterioration in pop culture.

The Shalva Band, comprised of eight very talented young adults with disabilities, is associated with Shalva, an association that provides a variety of services to those with disabilities. They perform at the highest level of professional standards – without raucous glitz – and had hoped to represent Israel at this year’s Eurovision. 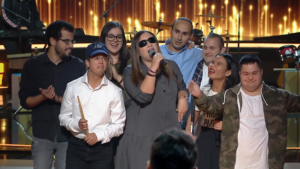 They ran into difficulty when they learned that Eurovision required rehearsals during the day on Shabbat, prior to the Saturday night finale.  Because some of their members are religious Jews, they declined to break Shabbat and withdrew from the competition.

That they could not have been accommodated is most regrettable, but they are to be celebrated for their values, their act of Kiddush Hashem: Honoring of God’s name.

In the end, they were permitted to do a special performance at the end of the second semi-finals on Thursday evening.  Please see their magnificent performance:

STILL, still no coalition has been formed. There are hints that we might not make it by deadline, and that a new election might be necessary (I don’t really believe this). A variety of other hints are flying with regard to what deals may be taking place.

Apparently, Lieberman and UTJ are meeting, which is good.

I had reported here that UTJ had signed a coalition agreement because that is what I had read.  Apparently this is not the case, as I understand it because their Council of Rabbis has to approve what they sign.

Most of the electorate is mighty weary of the slowness of the process, and I say publicly here that I am seriously disappointed.  Just as popular music is not what it once was, I am afraid that the focus of politics may have shifted as well.  (Certainly this is the case in the US!).

It’s about people today and not issues.  About who can undercut whom, which legislation can be passed to whose political advantage, and whose party can have maximum influence.  I thought Netanyahu was being a bit paranoid, or else playing politics, when he declared before the elections that Gideon Sa’ar was plotting against him.  My thoughts on the matter have since shifted, as Sa’ar has very recently made statements that subtly undercut him.  Binyamin Netanyahu was chosen by the electorate, and requires support at this time, especially from members of Likud.  The time will come for internal discussion – but the first order of business is solidifying a coalition.

At today’s Cabinet meeting, the ministers approved expanding the Cabinet (i.e., the number of portfolios) from the current 21 to as much as 26-28.  This requires repealing an earlier law which had placed the limits on the Cabinet.  The measure must now very quickly pass three Knesset plenary votes. Having additional portfolios to offer will, hopefully, enable the prime minister to enhance the negotiation process.

“Unfortunately the parties are still at the top of the trees they have climbed.

“I hope that the way will soon be found to bring them down to the ground so that together we can establish a strong and stable government for the State of Israel, which will continue to lead the country to new heights.”

I have long been an admirer of Menachem Begin, and today I lament, “Menachem, where are you?”  He was a humble man of integrity, who lived modestly and truly cared for the good of his nation first. 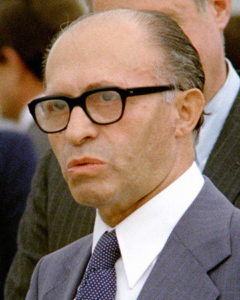 We are facing major issues with Iran, and with Hamas.  Now is the time for the factions to come together, demonstrating unity for the sake of a strong Israel.

Of note: A coalition has been established to promote the removal of Ilhan Omar from the House Foreign Affairs Committee.