From Israel: Facing Down Lies and Hatred

“Facing Down Lies and Hatred”

Lies and hatred and murder.  Murder motivated by the hatred that was stoked by the inciteful lies.

My friends, I ask that you share this posting as broadly as possible.

Friday night, Shabbat, Yosef and Tova Salomon were planning to celebrate the birth of a new grandchild. With them in their home were their son Elad, and his wife Michal, with their five grandchildren, as well their daughter Haya. The parents with the new baby had not yet arrived. Because they, and other guests, were expected momentarily, the door to the Salomon home in Neve Tzuf (aka Halamish), in the Binyamin Region of the Shomron, was open.

But it was hatred that came in the door, in the person of a 19 year old Palestinian Arab carrying a large knife.  He lunged at family members, and Yosef, Haya and Elad were all massacred. 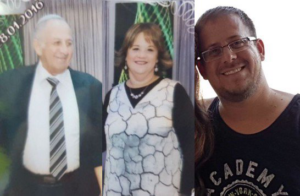 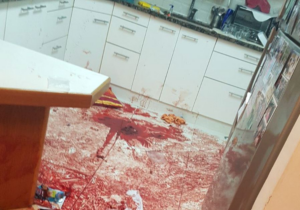 Tova was severely wounded and required emergency surgery.  When she awoke, she was told that her husband and two of her children were dead.

At the first sign of a threat, Eldad’s wife, Michal, rushed her three eldest children into an upstairs room, where her one-year-old twins were already asleep, and pressed against the door with all her might:

“I heard horrible screams and gun shots, and after what felt like an eternity, I realized it was over. I went downstairs, saw Elad and saw that my husband was not among the living.” 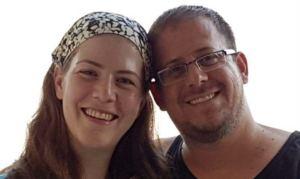 Three more people dead for no reason other than that they are Jews. One woman a widow, five children orphaned. The mind reels from this, and the heart cries, Again???

The terrorist was shot through the window by a neighbor who was alerted by the screams.  He was wounded but not killed and is now in custody.

Let me tell you about this 19 year old Arab.  He had written on his Facebook page the day before (emphasis added):

“I am writing my last testament and these are my last words.

“I am young, not even 20 years old. I had many dreams and aspirations. But what life is this in which our women and our young are murdered without any justification? They are desecrating the Aksa Mosque and we are sleeping. It’s an embarrassment that we are idly sitting by…

“All that I have is a sharpened knife, and it is answering the call of al-Aksa…”

There are at least two things we learn from this.  The first is that he bought the incitement promulgated by the Palestinian Authority and the Waqf.  The Aqsa Mosque has not been desecrated in the slightest (I will come to this below), nor have we been murdering Arab youth and women.  It is the PA and the Waqf that bear responsibility.

But notice please, that he considers it “an embarrassment” to “sit idly by.”  I wrote the other day about honor-shame societies and the Palestinian Arab need to regain “honor” via violence.  Here you have it precisely.

WITH SUCH PEOPLE GENUINE PEACE IS NOT POSSIBLE!

This is how it is:

[] Two Israeli Border Police were murdered by Israeli Arabs who had hidden their weapons on the Temple Mount. Israel’s Security Cabinet made a decision after long discussion to put up metal detectors so that no further weapons could be brought on to the Mount.

[] The Waqf immediately made a furor instead of cooperating.  As they presented matters, the problem was with the Israeli security, which “deprived” Arabs of the “right” to freely enter the Mount.  They made it seem as if Israel was to blame for the situation, and not the terrorists.

They expressed no horror at the terrorists having used their “sacred site” for weapons storage.  This is a clear give-away to true intentions.

[] They paid no attention to the insistence by Prime Minister Netanyahu that the status quo on the Mount had not changed. That status quo is actually prejudicial to Jews, who are not supposed to pray on the Mount and have limited access.

Nor did they acknowledge that using detectors is a routine procedure in this terror-ridden world, and that detectors are even employed at the holiest Muslim site, in Mecca.

Instead, they called upon Arabs to refrain from going through the detectors, even though entering was entirely possible, i.e., the Mount was not closed. In boycotting the Mount, they attempted to present it as if Israel blocked their entry.  The Palestinian Arabs and much of the world bought it.

[] At the same time, Fatah called for a “day of rage” to protest the situation.  The clear warning was that Friday, when many thousands come to pray at the Mount, would be the critical day.

To anyone with eyes to see, it is obvious that this furor is not about metal detectors, but about control, as I had indicated previously.

This is a matter of critical importance.  Because the Arabs will move from saying Israel cannot control security outside the Mount to saying no Jews should be on the Mount since it “offends” Muslims, to saying that no Jews should be in the Old City of Jerusalem, since this is Muslim territory too.

This is a fight that MUST be won.

See Jonathan Tobin on this:

“How could putting metal detectors to protect a holy site be considered a casus belli for what might, if the conflict escalated in the way the Muslim rioters promised, lead to a new holy war?

“…The answer is that this isn’t about metal detectors. It’s about something much bigger: the right of Jews to be in Jerusalem.” (Emphasis added)

On Thursday night, the Security Cabinet debated way into the small hours about how to handle the situation. Ultimately, they accepted the recommendation of the police to leave the detectors in place.

It was a huge relief to many of us, as caving before threats of violence is an enormous mistake.  While it was argued in some quarters that taking down the detectors would bring “a more peaceful situation,” ultimately caving means less peace, not more.

I’ve been writing about the Victory Campaign, and it applies here.  The Palestinian Arabs cannot be permitted to have the upper hand.

The police were given jurisdiction to take whatever measures were deemed necessary, and there were several measures that they did take: Muslim males under the age of 50 were not permitted on the Mount on Friday, Muslims from Judea and Samaria could not make their way into Jerusalem, etc.  Police indicated they believed they could handle the situation, and four IDF battalions stood at the ready.

There was rioting, and in the course of it, three Palestinian Arabs died.

At the same time, Mahmoud Abbas took an extraordinary step and announced on Friday the freezing of all contact with Israel – including security cooperation – until the Temple Mount issue is resolved and detectors are taken down.

As Deputy Minister for Public Diplomacy Michael Oren (Kulanu) observed, what Abbas is doing may serve a political need but “cuts off the limb on which he sits.”

Indeed. In the end Abbas needs Israel:  Hamas waits for the opportunity to take him down.

Defense Minister Lieberman has indicated we can manage without that PA security cooperation, which is surely the case.

Other threats continued as well.  Also on Friday, the head of the Waqf in Jerusalem declared that he spoke in the name of Muslims the world over:

Please note his objection to “settlers” entering the Temple Mount.  For him, all Jews in Israel are “settlers.”  So here you have it.

The Arab League, meanwhile, says Israel is “playing with fire” in Jerusalem.

And in Gaza, during his weekly sermon, Hamas leader Ismail Haniyeh said, “Today we are acting to bring the Al-Aksa Mosque and Jerusalem back into the embrace of the Arab World.”

“We are receiving an updated picture of the situation and recommendations for action, and we are acting accordingly.

“We are conducting this with composure, determination and responsibility – and we will continue to do so in order to maintain security.”

I like the tone because there is no hint of panic, but rather a sense of being in control.

And yet, I am nervous, for, tonight (likely well after I’ve posted this) there will be another meeting of the Security Cabinet, with discussions regarding how to proceed.  Any semblance of caving in the face of threats and violence would be an immeasurable error.

While there are some suggestions that it might be good to take down the detectors, in the end I suspect this will not happen, for one simple reason.  It will not restore quiet.

Cameras have been installed at certain points outside of the Temple Mount, with the thought that they might be used as an alternative. 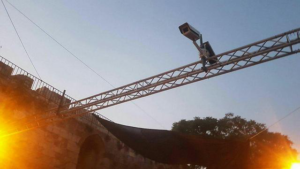 But the Waqf has already protested.  They are demanding no security measures at all.

Declared one sheikh, “the new measure is worse than the metal detectors…We will not agree to any inspection.”

This will not be considered. I think the Arabs are seriously over-playing their hand.

There are those who say we are on the edge of a third intifada.  I would say we are in it already.

Some are calling this a “religious” war.  I think religion is being used by the Muslims as a tool with which to attempt to clobber us.  It’s not really about devotion to their “holy place.”  Rather, this is a potent hook for coming after us.

What is infuriating, in the face of what we are contending with, is the way in which certain agencies and mainstream media sources get it wrong.

We have UN Secretary-General Antonio Guterres, for example, who, relatively speaking is one of the good guys.  On Friday he called on both sides to “refrain from any actions or words that could further escalate an already volatile situation.”  But this moral equivalency is not helpful.

Similarly do many media headlines obscure the reality.  This CBS headline told a distorted story: “3 Palestinians, 3 Israelis killed in violence over Jerusalem shrine,” and there are many similar instances.

This is why your sharing of information is so important.

The funerals for the three murdered members of the Salomon family were held today.  Thousands attended.