From Israel: Facing Down a Tough World

“Facing Down a Tough World”

This is a tough world, at best, and sometimes scary and downright insane. 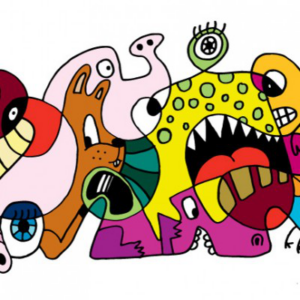 We are reassured when there is determination and strength exhibited by our leaders and those who stand with us.

And I think every now and then – perversely – we can also be reassured by the way that our enemies conduct themselves.

With that said, I will begin with an update on the “progress” of the “unity” arrangement between Fatah and Hamas:

Israel’s Security Cabinet met on Tuesday, at which time they decided there would be no negotiations with a unity government unless the following conditions were met:

[] Hamas would have to break with Iran; renounce terror; return the Israeli citizens and bodies of IDF soldiers that it is holding; disband its armed wing; and recognize the Jewish state.

[] The PA would be expected to handle all humanitarian supplies to be sent into Gaza, to preclude Hamas smuggling, and would have to continue to act against Hamas in Judea and Samaria.

As they say: when pigs fly.

The Cabinet decided not to break with the PA completely, with regard to security matters.

Humphed a senior (unnamed) PA official, this Cabinet decision is just an excuse on Israel’s part to avoid negotiations.  Because (emphasis added):

“…in reality there is no Palestinian unity government.

Yes, it’s true that currently there is no unified government consisting of the two factions.  But the unity government has yet to be formed; work on this process is supposed to begin in coming weeks. According to an earlier Cairo agreement – which failed in 2012, and which the parties say they are now following – elections are to be held within the year.  In due course, if this process continues, Hamas would indeed be inside the government.

The PA official then explained why there is no unity government:

“Abbas wants there to be only one government, one law and a single, solitary legitimate weapon. He has said time and again he doesn’t want the Lebanese Hezbollah model to be implemented in Gaza, but we’re still a long way away from that. We’ve only now passed the first hurdle…”

Ah, now we come to the heart of the matter.  It was all hugs and kisses at the signing, but there is still no agreement on some very key issues.  Does this mean that, in spite of reports to the contrary, Abbas won’t buy into the Hamas proposal that Fatah would help make decisions on when to use the stockpile of weapons, but that it would remain in the hands of Hamas?

Hamas had its say on the matter, as well:

There had been reports of a tacit understanding between Hamas and Fatah that, at least for a while, Hamas would halt terror attacks in Judea and Samaria.  But senior Hamas spokesman Husam Badra says this is not so (emphasis added):

“The position to choose resistance…is the position of the entire Palestinian people to decide. The natural situation is that when there is an occupation, there will be a resistance to confront it.”

Meanwhile, Hamas is furious at Abbas.  In spite of the agreement signed in Cairo last week, he has not lifted the sanctions on Gaza, intended to squeeze Hamas in the first place. This time it was another Hamas spokesman, Fawzi Barhoum, who spoke out (emphasis added):

“We agreed with Hamas in Cairo to enable the government to work. We need to make sure this is achieved.”

On Monday, during a routine reconnaissance flight by the Israeli air force over southern Lebanon, a Syrian ground-to-air missile battery in Syria opened fire on the IAF planes.  The Israeli planes then returned fire, dropping four bombs on the SA-5 battery, destroying it.  The Russian military had been informed before the bombs were dropped.

There were no Israeli casualties and the IAF planes were not damaged. The IAF let it be known that this was a necessary response to a Syrian provocation, but did not represent an escalation. 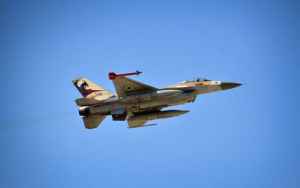 “Our policy is clear: Anyone who tries to hurt us will be hurt in return,” said Netanyahu.

At the time of this incident, Russian Defense Minister Sergei Shoigu was visiting here. When he met with Prime Minister Netanyahu on Tuesday, the primary topic of conversation was the situation in Syria.

According to the Prime Minister’s Office, Netanyahu told Shoigu that “Iran needs to understand that Israel will not allow [Iran to set up a permanent presence in Syria.]”

Shoigu told Defense Secretary Lieberman that the Russian operation in Syria would be finished soon and there were issues that needed to be addressed. He said he hoped his visit would help the parties “better understand each other” and contribute to strengthening ties between the armed forces of the two countries. 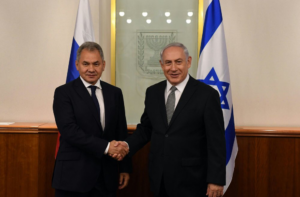 In no sense of the word would I suggest that the Russians are a “trusted ally” (it is because of Russian involvement that the Iranian-backed Assad is still in place), but our prime minister has judiciously built a relationship with them that, whatever its limitations, serves us in several regards.

On learning of the decision, Netanyahu put in a call to Putin.

Earlier this month, head of the Mossad Yossi Cohen warned that Iran, through its proxies, is operating closer “than ever before” to Israel’s borders with Lebanon and Syria.

There is, in addition, information on a direct Iranian presence.

Netanyahu and Defense Minister Lieberman are keenly aware of this existential threat.  And I remain convinced that, on this, they will not blink.  They know they dare not.

In the face of Syrian threats yesterday that Israel would not be permitted to enter Syrian airspace, Lieberman responded (emphasis added):

“The Iranians are trying to take control of Syria, want to establish themselves there and be the dominant force – we will not let this happen.

“We…have all the tools necessary to deal with this challenge.”

Yossi Cohen alluded to this in his statement at the beginning of October:

The Mossad, he said, “carries out hundreds, thousands of activities every year — some of them complicated and deep within the heart of enemy countries.”

His intelligence service is “focused only on the top national, security and political priorities.” 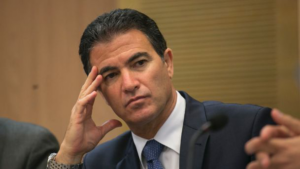 Be reassured: we are not waiting like sitting ducks.

I had hoped to also look at Trump’s recent decisions on Iran, which are excellent. But the issue is complex, and I will return to this in my next posting.