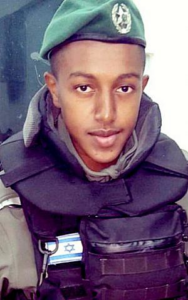 Solomon Gavriyah, of Be’er Yaacov, was a Staff Sergeant with the Border Police.  Last year, he was wounded in a knife attack but insisted that he wanted to return to duty.

Now he is dead, shot Tuesday morning by a terrorist. He was 20 years old.

At his funeral, Police Commissioner Roni Alsheikh called him a hero: “In recent years it has been our best officers who were those killed in the line of duty, and you, Solomon, as I have heard from your commanders and comrades, were one of them.”

He was described as “salt of the earth, a true patriot” with a “huge heart.” 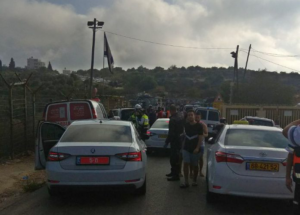 The terrorist – who had papers and had worked legally in Har Adar for over two years as a cleaner – appeared suspicious to the security personnel. When he was approached, he pulled out a gun and began shooting.

Two civilian security guards who worked for the community were killed along with Solomon:

Youseff Ottman, 25 (left, below), was from a prominent family in the Israeli Arab village of Abu Ghosh and had served as a combat soldier. Abu Ghosh Mayor Issa Jaber described him as a “quiet guy who got along with everyone…always extended a helping hand to everyone”

Youseff’s cousin had been murdered by a terrorist in Mahane Yehuda in Jerusalem some years ago. Youseff’s father said his son actually knew the terrorist who took his life.

Or Arish, 24, who lived in Har Adar, had served with the paratroopers.  He was working extra security shifts in order to save money for college. His uncle described him as a “special boy” whom “everyone loved.” 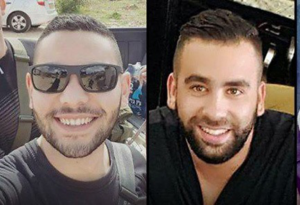 Three young lives lost, for nothing. Truly, nothing: except hatred.

But let it be noted that if the three had not been there, at the entrance to the community, the terrorist would have entered and done far greater damage.

The terrorist, Nimer Jamal, from the nearby Arab village of Beit Sarik, was shot dead at the scene.

He was said to have operated as a “lone wolf.” By this is meant that he was not recruited by one of the terrorist groups.  But I dislike this term, as it is misleading.  These guys do not operate in a vacuum.  Most often there are others who assisted the terrorist or were privy to his intentions, and often they are members of his family.   Already I have read that three suspected accomplices, including two of Jamal’s brothers, have been arrested.

What is more, they operate in a particular climate that incites and promotes violence. One of Youssef’s relatives, an Israeli Arab, said: “I blame the Palestinian Authority, which doesn’t want peace with Israel.”

I will return to this.

There is talk about the fact that the terrorist apparently abused his wife, who fled from him weeks ago.  I do not know that this is relevant.  Arab abuse of women is not uncommon, and it does not appear that there was any personal crisis at the precise moment when he acted.  It’s too facile to say he turned violent simply out of emotional stress.

Particularly because there are suspected accomplices, there is every reason to believe he was operating according to a premeditated plan that was intended to have major consequences.

So, why now?  Because it is the Jewish holy season?  Or because Jason Greenblatt is here to “advance peace”?  There are those saying, with some considerable justification, that this is the Palestinian Authority answer to “peace.”

Certainly, this does not motivate the Israeli populace to making gestures for “peace.”

Public Security Minister Gilad Erdan spoke about the motivation, saying that this is “ideological terrorism based on radical Islam and calls to ‘kill the infidels.’ When a terrorist has a valid work permit, you cannot be speaking about a national or territorial dispute. It only proves the conflict is religious, and not territorial.” (Emphasis added)

The fact that the terrorist did have a work permit and had worked in Har Adar for over two years further exacerbates the situation.  All of the Palestinian Arab workers in Har Adar were brought in for questioning after the attack, and there are reports that they lamented, “What has he done to us!”

There are very serious questions of trust here:  The terrorist was thought to be a perfectly nice guy.  Until he killed.

There are arguments made about the fact that providing work for Palestinian Arabs reduces the possibility that they will be motivated to participate in terrorism.  Perhaps. And yet…  Is terrorism motivated by economic deprivation or, as I would argue, ideology?

We have not seen the end of this deeply troubling issue.

Not unsurprisingly, Hamas has praised the attack, saying that it “was made against the attempts to Judaize Jerusalem.”

Jason Greenblatt not only condemned the attack, as did US Ambassador David Friedman, he (as did the EU) directly condemned Hamas for praising it.

I have made light of it, because I feel nothing is going to come of it, but right now the PA and Hamas are supposed to be joining in cooperation or unity or whatever…

I wonder how Greenblatt sees the chances for peace, in light of this.  Not that Fatah is any better.

Tuesday morning Prime Minister Netanyahu put out a statement saying that he expected the Palestinian Authority to condemn the attack.  As I write Abbas has not yet done so, but keep in mind that if he later feels constrained to issue a condemnation because of pressure placed upon him, it will not be sincere. A sincere condemnation would follow the attack very quickly.

What I can share is a report from the Palestinian Media Watch (emphasis added):

Immediately after the terror attack, the Nablus branch of Fatah (the party of the PA and of Mahmoud Abbas) posted on its Facebook page:

“What is the homeland?

“It is the longing to die in order to return the right and the land that were stolen.

“A morning scented with the fragrance of the Martyrs (Shahids).”

This, my friends, must be shared.

All of the usual responses to a terror attack by a Palestinian Arab are being set in place: his village was sealed off, it is said his house will be demolished.  I wait with unease to see what happens with his body.

There are a great many related issues that I will want to visit in coming posts.  There are calls for the death penalty for terrorists who survive their attacks, for expulsion from Israel of family members who have citizenship or residency papers, and for the automatic revocation of citizenship for Israeli Arabs complicit in terror.

Here I share one action on the part of Israelis that has considerable import (emphasis added):

“Dozens of bereaved families have announced the formation of a new organization through which they will seek to increase deterrence against would-be terrorists and fight against the “lavish conditions” received by terrorists in Israeli prisons.

“The organization, ‘Choosing Life,’ is comprised of over 40 bereaved families, the majority of whom lost their loved ones in the recent wave of terror that began in the fall of 2015…

“The decision to establish an official non-profit organization stemmed from a series of intensive activities conducted by the families over the past two years in which they’ve advocated for stricter conditions for terrorists in Israeli prisons and for harsher punishments against those complicit in the attacks, including family members of the terrorists.

“The families have also been active in protesting the foreign government-funded legal defense provided by Israeli NGOs to terrorists and their families.”

I am aware that there seems to be a bitter irony, that after I put out a post that was considerably upbeat and inspirational, I must follow with this.

But there is no irony. I wrote: If we remember [the miracle that is Israel] during the hard times, and the frightening times, we will find strength and hope.

Let us find that strength and hope.

We are days away from Yom Kippur.  I wish all who are observing a meaningful fast. 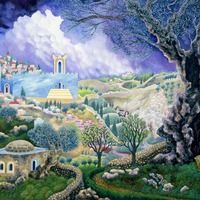