From Israel: Celebrating Our Nation

Feeling good about Israel is great.  But I would like to suggest that it’s just a first step.  Once you understand what we’re about, and what there is in Israel to be celebrated, you can then help others to understand — especially is this the case if you are outside of Israel.  In light of all the attempts today to delegitimize Israel, this is not a small thing.

Dr. Tal Ben-Shahar is an Israeli who left for the States years ago, and ended up teaching at Harvard.

When he returned to Israel recently — he’s now teaching at the Inter-Disciplinary Center in Herzliya — he was astounded at the changes in his native land.  This ultimately prompted him to created a film, “Inside Israel: How a Small Nation Makes a Big Difference.”

“[It] shows Israel to be a dynamic, inventive and humanitarian society.  Tal helps us discover that the deep-seated Jewish values such as freedom, education, family and responsibility (tikun olam), mixed in with a good dash of chutzpah, contribute to Israel’s accomplishments in both the economic and humanitarian spheres.   We learn that these core values define Israel and have fueled this tiny, resource-challenged country’s drive to become an invaluable asset to the world.”

(It is breathtakingly ironic, of course, that enemies of Israel, for perverse political reasons, would destroy a state that does so much good for the world, including for those enemies.  But I digress from the focus of this film…)

I encourage you to visit the website for the film:  http://www.israelinsidethemovie.com/ .  There, you can see the trailer. Then if you are inclined — and I encourage this! — you can order the video or make arrangements for a showing in your community.  It should be shown on campuses, especially, but also in synagogues and churches, community centers, etc.

Borrowing from an old commercial: “When you care enough…”

A full 28% of our population is under 14, compared to an average of 17% in Western nations.  That is because our birthrate is higher than in the Western countries.  And it leads to a child-oriented society, with kids everywhere, even brought to fancy weddings; in malls, and in museums, even on the street, during vacations times, there are activities for children.  I think it’s great and what a positive, hopeful attitude this reflects.

The birth rate for Jews is increasing, I will add (for those concerned about demographics) and for Arabs is decreasing.

Yom Ha’Atzmaut is a good day to read a piece, “Taking back our national sovereignty,” written by Gerald Steinberg, who is president of NGO-Monitor and professor of political science at Bar Ilan University.

“…the last thing that most of us want is to have foreign governments, with their own interests and perspectives, trying to manipulate Israel’s most important decisions, regardless of their good intentions. This was the thrust of David Ben Gurion’s addresses to UN committees in the 1940s, and Menachem Begin’s impatient meetings with Jimmy Carter in the 1970s.
“As Israelis celebrate their 64th anniversary, the relationship between independence and Zionism is still insufficiently understood or accepted around the world…

“For the first years after the creation of modern Israel, Europeans generally seemed to accept the centrality of Jewish sovereignty, reflecting the tragic legacy of oppression ending with the Holocaust. But gradually, as the consequences of Arab rejectionism, wars and terror spilled over into Europe, this understanding was replaced by paternalism and manipulation. In the years and decades following the 1967 war, European leaders began to seek instant solutions to the conflict.

Their peace plans promote the false narrative that automatically defines Palestinians as weak victims and refugees, while blaming Israeli policies, particularly settlements, for the ongoing violence.

While using international frameworks in the effort to impose policies based on this false premise, Europe (including non-EU members Norway and Switzerland) has used funding mechanisms to manipulate Israeli politics and society on a massive scale. Both tactics negate the core principle of national sovereignty…”

In light of this, I make mention here that three communities in Judea and Samaria that were unauthorized have now been officially recognized as legal by the Israeli government:

Bruchin, a religious community of 100 families founded in 1999 on state land in the western hills of Samaria. 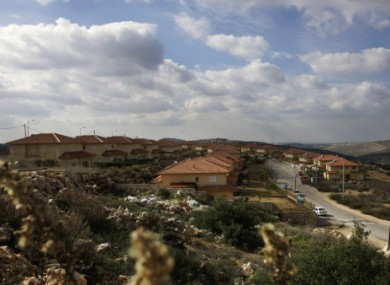 Rechalim, a community of some 35 families, founded in 1991 on state land in northern Samaria, after the terrorist murder of Rachel Drouk of Shilo.  In the beginning women, with their children, from many places in Judea-Samaria set up tents on this site.

Sansana, a religious community of 48 families in the Hills of Hevron, Judea, on the edge of the Negev, which was established first in 1997 as a Nahal core settlement and then expanded.  Its name is taken from the “Song of Songs.” (Nahal refers to a program of the IDF that combined military service with establishment of core agricultural communities.)

Naturally, we have heard from the international community, including the EU, the UN, the US and the PA, with regard to this.

We are, you see, upsetting all chances for peace to advance.

Israel’s response is that these communities were all built on uncontested state land and had actually been approved for full legalization a decade ago although the approval was never executed.

On April 22, CBS ran a segment of “60 minutes” with Bob Simon that exhibited outrageously anti-Israel bias.

Addressing the issue of disappearing Christian Arab communities in “the Holy Land,” Simon managed to finger Israel as the major problem.  Ignoring the Muslim treatment of Christians, which has them terrified and often afraid to speak, he is content to lay the blame on Israel.  Israel! Which is the only nation in the Middle East that protects its Christian population and provides them with full religious rights.  Israel! The only nation in the Middle East where the numbers of Christians living within its borders has grown.

And all of this at a time when surrounding Muslims countries, with their increased radicalism, have made life near impossible for Christians.

In a letter he put out on this subject, Israel Allies Foundation (http://www.israelallies.org/site/about/) Executive Director Willem Griffioen writes, “First, and most obviously – it paints the democratic country of Israel in a negative light in a blatant attempt to dislodge Christian support for Israel.”

The organization Stand-With-US has put out excellent material on this program, and I would like to refer you to that:

It examines the lies and anti-Semitic innuendoes, provides important factual information and gives contacts for registering complaints.  I urge you to follow through here.  This means not only protesting to CBS, but setting the record straight in all possible venues — speaking to friends who have seen the program, writing letters to the editor, etc.

Read the story of the Arab in Jerusalem, identified only as “S,” who keeps the fact that he is in the IDF a secret.  Heart-warming. Tells us how things should be. But how far we have yet to go:

And in closing on this special day, the very special Naomi Shemer song “Al Kol Eleh,” (“over all of these, the bitter and the sweet, grant your protection…please do not uproot the planted, do not forget the hope”), with English subtitles: