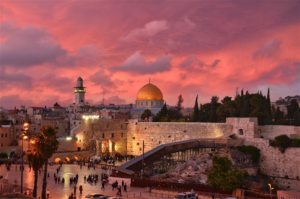 If you can tolerate a painful pun: it trumps news about Trump (who is here in Israel as I write).  I will in due course write about the president’s visit – here and in Saudi Arabia, but now I am inspired by Yom Yerushalayim – Jerusalem Day.  It begins at sundown Tuesday and will be celebrated through Wednesday.

Yom Yerushalayim is an annual celebration marking the reunification of the city.  But this year the celebration is especially festive, because it is now 50 years since Israel liberated eastern Jerusalem from the Jordanians, on the third day of the Six Day War in 1967. 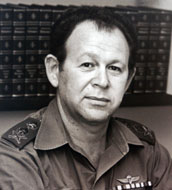 Chief Rabbi of the IDF Shlomo Goren sounded the shofar (although I understand that he had trouble doing so because he was so emotionally overcome). 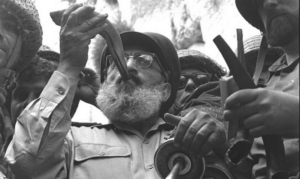 Soldiers wept, and sang and danced. Prayers were said – for thanksgiving, and for the souls of those who lost their lives taking the Old City.

It had been the better part of 2,000 years since Jerusalem in its entirety was under Jewish control.

Three thousand years ago, King David declared Jerusalem to be the capital of the Jewish nation. He did this to unite the 12 tribes, as this was a city that did not fall within the territory of any of the tribes and could belong to all of them.

It was in Jerusalem that David’s son Solomon built the First Temple, on the high point that is identified with Har Moriyah.

When you come to visit Israel, I encourage you to take the time to tour Ir David – the City of David, right outside the walls of the Old City.   This was the original Jerusalem of David, and today you can see archeological ruins from that time. 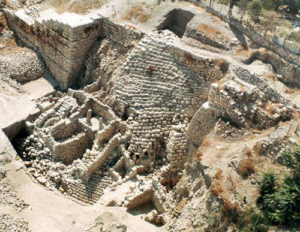 After the destruction of the Second Commonwealth in 70 C.E., there was no longer Jewish sovereignty.  Various occupiers came and went over the centuries. There was, however, (with the exception of a brief period during Roman control) a continuous Jewish presence in Jerusalem.  By the late 1800s, Jews had again become the majority of the city’s population.

Most significantly: in the course of three millennia, Jerusalem has never been the capital of any nation other than the Jewish nation.

In 1922, the British Mandate for Palestine was set into place by the League of Nations.  This was international law.  Jerusalem was within the area set by the Mandate for a Jewish homeland.

When Israel declared independence in 1948, Jordan was among the Arab countries that immediately attacked.  By the end of that war, in 1949, Jordan had taken the eastern part of the city – which is actually at the core of ancient Jewish tradition.

Perversely, this area was in later years dubbed “Arab Jerusalem” (as if it somehow “belonged” to the Arabs) only because all Jews had been forcibly banished during the occupation.

The Jordanians also reneged on their commitment to allow Jews access to our holy places, notably the Kotel and the ancient cemetery on the Mount of Olives. They destroyed synagogues and desecrated graves.

In 3,000 years, Jerusalem was divided only once:  During that illegal 19-year Jordanian occupation.

The absolute historical norm of Jerusalem is as an undivided city.

Today, many Jews live in the eastern part of the city (what is called “eastern” really refers to everything beyond the 1949 armistice line), which has been built up.

Here you see a plaza in the Jewish Quarter of the Old City. 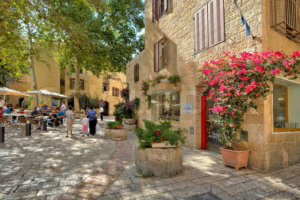 You may read about Jews pushing into Arab areas, but often those so-called Arab areas were Jewish before 1948.  I have seen old stone houses in “Arab” neighborhoods that had a niche in the doorpost where the original Jewish owners put their mezuzah.

Jews have a right to live and build anywhere in Jerusalem.

Jerusalem will never be divided again!

The city is ours by virtue of ancient heritage as well as law.  The Jewish people, dispersed across the world, yearned for Jerusalem for centuries. We shall not have it denied to us now.

Only in a Jewish Jerusalem will we have the possibility of accessing our holy places. Under Israeli sovereignty, actually, people of all religions have a right to access their holy places.

Jerusalem, complete and united, is the Capital of Israel.

ee Israel’s Basic Law on this:

Whatever the world chooses to say, we know.

The claim that eastern Jerusalem must be the capital of a Palestinian Arab state has no legal standing. It is not promised in Oslo or anywhere else.  Palestinian Arabs made up that “right.” The same Israeli rights that apply to Judea and Samaria – based on the Mandate for Palestine – apply to all of Jerusalem.

Occasionally you may also see the claim that Jerusalem is a corpus separatum – a separate legal entity to be administered by the UN. This was part of UN General Assembly Resolution 181, which recommended partition of Palestine in 1947.  But that resolution was only a recommendation, and was, in any event, rejected by the Arabs. It carries no weight in law.

I am blessed: I live in Yerushalayim.  The energy and the beauty of the Holy City surround me.

On Wednesday, I will be out there, rejoicing as our young people dance with the flag through the streets of Jerusalem. 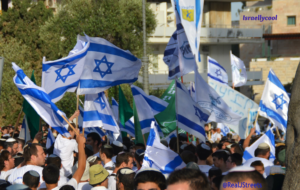 Yerushalayim Shel Zahav was written by Naomi Shemer and introduced to all of Israel weeks before the Six Day War by Shuli Natan.  It has a special place in the hearts of Israelis. This version, with English subtitles, is by Ofra Haza z”l: