From Israel: Beyond Knowing

I’ve written about this before and feel called to write about it again in this brief posting:  I cannot begin to explain it, but I have seen time and time again that the people who are killed in terror attacks are special people.

This is certainly true with regard to Rabbi Raziel Shevach, who was taken down in a hail of bullets by Palestinian Arab terrorists on Tuesday night.  The comments from family and friends regarding the sort of person he was are not only touching – they reinforce the realization that his death is a great loss for his family, his community, and for Israel.

He was “a man of grace, a man of Torah and a friend. All who knew him loved him, and loved him deeply,” said Yossi Dagan, head of the Shomron Regional Council. While Chief Rabbi David Lau described Rabbi Shevach as a “unique, affable and rare character” who “devoted his life to saving lives, teaching Torah and safeguarding Judaism in the Land of Israel.”

We say of the deceased: May his memory be for a blessing.  There is no question about the fact that this will be the case here. 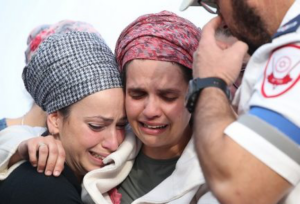 But I believe that more is required, if the rabbi’s memory is to be properly honored.

We are called upon to strengthen ourselves, and act with devotion and determination on behalf of Israel and the Jewish people.  My concern is that words of dedication will be spoken now, in the time of mourning, and not fulfilled as life normalizes.  We cannot let that happen.
~~~~~~~~~~
I was pleased that, on Thursday, Prime Minister Binyamin Netanyahu instructed the defense Thursday to connect Havat Gilad to the electric grid.  That’s a start.
~~~~~~~~~~
It made news this week that in a meeting in Jerusalem with ambassadors to Israel of NATO states, Prime Minister Netanyahu said that:

“We have, through our intelligence services, provided information that has stopped several dozen major terrorist attacks, many of them in European countries.

“Some of these could have been mass attacks of the worst kind that you have experienced on the soil of Europe and even worse, because they would have involved civil aviation. Israel has prevented them, and thereby helped save many European lives…

“We are absolutely committed to preventing Iran from forming…a military base in Syria, and we back our words with action…

“If Iran realizes its goal of bringing in 100,000 Shi’ite fighters into [Syria]… Where will the spillover happen? In Europe. Where will the human flow go? To Europe. 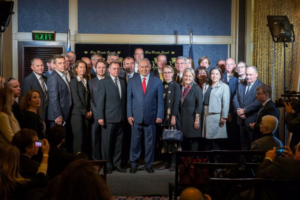 ~~~~~~~~~~
Another way, then, that Israel is a blessing to the nations of the world. But if the Europeans have expressed public gratitude to Israel for all of this, or demonstrated determination to side with Israel more vigorously, it has sure escaped my attention.  More often than not, the leaders of Western Europe spit in our collective eye.

And so, it seems to me, we need to hold our heads high, and concern ourselves less with what these leaders think, and do what is right for Israel – with all considered determination.
~~~~~~~~~~
I encountered a fairly amazing situation in South Africa, which I want to share here.  A good deal of BDS activity comes out of South Africa, which has not exactly been kindly disposed to Israel.

Last month, the ruling African National Congress (ANC) government voted to downgrade their embassy with Israel to a “liaison office.” 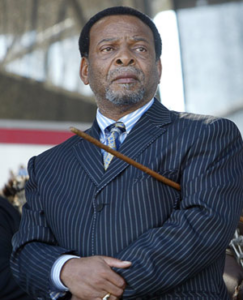 He told ANC leadership that he had developed a close relationship with Israel and with the South African Jewish community since his 2009 decree introducing medical circumcision for boys in an effort to halt the spread of the AIDS virus.

“There are two clinics that have been built by Jewish organizations in this kingdom. They came because I requested them to come.”

He implored the government not be involved in wars about which they know nothing.

Others within the Zulu nation have spoken out as well, including church leader Nkosi Bishop Phakama Shembe, who said:

“…for South Africa to prosper, we firmly believe that it must stand in support of Israel, not against it.

“Today, unfortunately, there are other voices within our society that are demanding the opposite.”

It is South Africa’s duty, he maintained, “not to choose the path of boycott and disengagement, but to assist in whatever way we can.” (Emphasis added)

How about that?  Are the Europeans aided by Israeli intelligence taking notes?
~~~~~~~~~~
As we are looking at complex ties with other nations, I must mention India here.

In 2016 India signed on to a massive $500 million deal for anti-tank technology from the Israeli company Rafael.

Following this, last summer, there was the visit of Indian Prime Minister Narendra Modi, which I believe was the first for a sitting Indian prime minister. It was considered a smashing diplomatic success; Prime Minister Netanyahu was with him almost constantly during his three days in Israel, and all indications were that there was genuine warmth between the two leaders.
~~~~~~~~~~
From there the relationship between the two countries, which had seemed so positive, went downhill.  In the UN General Assembly vote on voiding Trump’s recognition of Jerusalem as Israel’s capital, India voted with the majority.  This was an unexpected blow and Israel registered a formal protest.

It is my understanding from what I’ve read that this move by the Indian government did not have popular support.
~~~~~~~~~~
India, which had chosen to support the Palestinian Arab position, was soon to regret having done that.  Just days after the UN vote, the PA ambassador to Pakistan, Walid Abu Ali, shared a stage with Hafiz Muhammad Saeed, who was the mastermind of the 2008 terror attack in Mumbai, which killed 160 people.

This was broadly shared on social media, rendering PA denials rather ineffective. (Abu Ali is on the right). 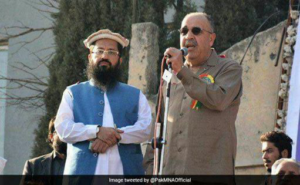 The Indian government was furious. (For the record: the PA said it was removing Abu Ali from his post, but they lied – he went home and shortly after returned to Pakistan.)

What exacerbated the situation is that Rabbi Gavriel and Rivka Holtzberg, who ran the Chabad House in Mumbai, had been murdered in that attack. Their son, Moshe, who is being raised by his grandparents here in Israel, met with Prime Minister Modi last summer, and received an invitation to come to India.

Then, just days ago, announcement came that India had cancelled the deal for weaponry from Rafael.
~~~~~~~~~~
Now Prime Minister Netanyahu is about to begin a visit to India, his very first.  Moshe Holtzberg and his grandparents and Indian nanny – who saved his life during that terror attack – will be traveling with him.

On the cusp of that visit, there are some solid indications that the Rafael deal may be reinstated.