From Israel: Appalled and Grieving!

On Shabbat, in the city of Pittsburgh, as surely all of my readers know, eleven Jews – eight men and three women, but, thank Heavens, no children – were killed in what is being described as the worst anti-Semitic attack to ever take place in the US.

The identities of the victims are just beginning to be released as I write. We know of two brothers, and a married couple.

The attack took place in the Etz Haim (Tree of Life) Synagogue, a Conservative synagogue in the Squirrel Hill section of the city, which today also houses two other minyanim (prayer groups).

It occurred while a brit milah (ritual circumcision) was taking place, which multiplies the obscenity of what happened.  Makes my head spin, actually. 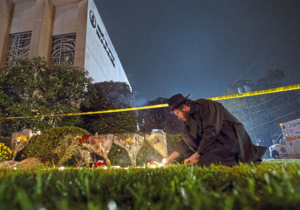 The attack was an enormous shock because Squirrel Hill is a mostly peaceful neighborhood – at the heart of Jewish community in Pittsburgh and home to many synagogues. Squirrel Hill, which is 40% Jewish, was, literally, “Mr. Rogers’ neighborhood,” as it was where Fred Rogers, the much beloved, soft-spoken educator who produced the show by that name for a generation or more of American children, lived.
~~~~~~~~~~
As the murderer, Robert Bowers, a Pennsylvania resident, entered the synagogue and unleashed a hail of bullets, he was heard to repeatedly yell “Kill all the Jews!”

On social media he had posted virulently anti-Semitic messages.

He was taken into custody after a gun battle with a SWAT team, in the course of which he was wounded.  Twenty-nine federal charges will be brought against him; there is talk of applying the death penalty in this case, which sounds like a good idea to me.
~~~~~~~~~~
After Shabbat was over, word had gone out and thousands of people, Jews and non-Jews alike, gathered in the heart of Squirrel Hill for a Havdalah service (marking the end of Shabbat) and vigil for the murdered. 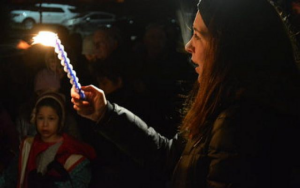 President Trump spoke out clearly and forcefully, saying that the “monstrous” attacks:

“It must be confronted and condemned everywhere it rears its ugly head. We must stand with our Jewish brothers and sisters to defeat anti-Semitism and vanquish the forces of hate.”

Here in Israel, Netanyahu responded that:

Naftali Bennett, who serves as Minister of Diaspora Affairs, as well as Education Minister, left last night for the community, to provide support.
~~~~~~~~~~
The most important thing that can be done now, if there is to be healing, is to follow the model of Squirrel Hill, where people have come together in mutual support.

I do not know how to emphasize this enough.   There must not be further social divisiveness.  Society is coming apart enough as it is.
~~~~~~~~~~
Nor should facile solutions regarding how to improve the situation be offered.  There must, instead, be well thought-out and reasoned discussion.

The issue of gun control will undoubtedly come up.  But even here we see how simplistic solutions, if offered, would not be helpful.

Bowers had an active firearms license and has made at least six known gun purchases since 1996. He did not have a criminal record and was not known to police.

The vast likelihood is that had there been more stringent gun legislation put in place in recent years it would have had zero effect on what happened over Shabbat.

It’s time to get real and work on American society.
~~~~~~~~~~
In that light, I want to discuss just one other matter here – with everything else tabled for my next posting, and, trust me, there is a huge amount to write about.

Over the course of several days, 13 devices, referred to as “pipe bombs” were sent to left wing persons critical of President Trump. It started with a package sent to George Soros.  Then packages went to Senators Corey Booker (NJ) and Kamala Harris (CA); to Congresswoman Maxine Waters (CA), and former attorney general Eric Holder, former vice president Joe Biden, and former CIA director James Clapper; to the homes of Hillary Clinton and Barak Obama, and others, including actor Robert Di Niro (who delivered a f**k Trump speech at the Tony awards in June).

Authorities were able to track the individual who sent these packages, via DNA, traces of which he left on the packages with his fingerprints.  Now they have arrested Cesar Sayoc, in Florida, and he is being charged with a number of offenses.

Sayoc, a thoroughly unsavory character, has an arrest record going back more than 25 years, including on charges of theft and battery.

https://www.theguardian.com/us-news/2018/oct/26/suspicious-package-pipe-bombs-latest-found-cory-booker-florida
~~~~~~~~~~
Sayoc is also a registered Republican and a fan of President Trump.  And it is in this regard that I have concerns.

For in the divisive climate that exists in America today, the charge arises quickly that “Republicans” and “Trump supporters” – as evidenced by the behavior of Sayoc – are prepared to be violent or level threats of violence against those opposed to Trump:  A vastly simplistic and very politically charged conclusion.

The truth is considerable more nuanced, and I want to share information that might offset that politically charged conclusion.
~~~~~~~~~~
We might begin with the fact that it is unlikely that Sayoc ever intended to hurt or even frighten anyone.  Angelo Codevilla, who worked in counterintelligence for the Senate, observes (emphasis added):

“Nothing about the devices themselves fit the main story of harm and fear. First, they were made of PVC pipe—grossly insufficient for containing an explosion to lethal force. Second, whereas package-bombs are set to go off when the package is opened, these contained outside timers, apparently unconnected to what may or may not be detonators.

“But though incapable of hurting the recipients, were they meant to frighten them into silence? Believing that things so obviously harmless could frighten persons protected by world-class security beggars belief. In short, these devices’ anomalies lead the analyst to conclude that they were meant to look like bombs, aimed at a credulous press…”

What was presumably intended by Sayoc – in his leverage of the media – depends upon interpretation, and upon his level of stupidity, which appears to have been considerable.

I’m not going to go there, except to make the point that no point should be made of this.  Here, too, as above, my appeal is for a reduction in divisiveness, not an increase.
~~~~~~~~~~
It is time for all political factions to do their own soul searching, and cool their own rhetoric.

My fear is that there is an eagerness on the part of Democrats to unreasonably place responsibility for violence and violent speech at the feet of a tough-talking president and Republicans more broadly. That would require an extraordinary amount of self-delusion, when the record shows that:

And just last month Hillary Clinton opined that, “You cannot be civil with a political party that wants to destroy what you stand for…”

While Madonna confessed to the crowds at the “women’s march” back in January 2017, that, “I have thought an awful lot about blowing up the White House.”

I would like to hope that civility can be restored to America, and that each political figure might be judged by his or her positions and achievements for the country.

It is probably asking the impossible, but therein lies hope for America.
~~~~~~~~~~