From Israel: “Another Way of Looking at It!!”

What I am eager to offer here is a different perspective on some of the matters confronting us. It is not my intention to suggest that all is well.  We know it is not, not even remotely.

Yet information that provides hope of better times going forward is out there.

Unfortunately, we don’t always take the time to notice it!  Embracing the good and the promising is the only way for us to get through this time in a world gone crazy.  It strengthens us, and buoys us.

And it is especially appropriate during this holiday season.

During his address at the Opening of Parliament last Thursday, he harshly criticized local councils that engage in BDS.  Declaring that these councils were participating in a “pseudo foreign policy,” he noted that one specific country finds itself on the receiving end of this practice with “nauseating frequency” ‒ “namely, Israel.” 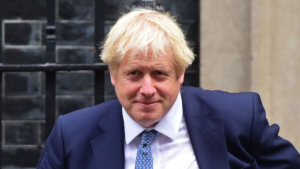 See this impressive Chanukah message by Prime Minister Johnson to the Jews of Britain.  This is a WOW! Especially when you consider what was averted by his electoral victory.

Defense Minister Naftali Bennett is adopting a new policy towards the Iranian presence in Syria: Moving from containment to attack, he aims to convince Iran to leave Syria completely.  He intends to do this by stepping up attacks on Iranian installations, until Iran is forced to cut its losses and pull out.

Bennett believes there is a window of opportunity for this to happen because of the unrest in Iraq, Lebanon and Iran itself. The rules have changed, he declared recently. “…Our message to Iran’s leaders is simple: You are no longer immune. Wherever you stretch your tentacles, we will hack them off…”

Bennett recognizes that there is a danger of retaliatory Iranian attack, but believes it is worth the risk because such attacks would be much worse if Iran were to become entrenched on the Golan – it is better to pre-empt this now. 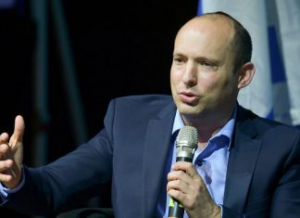 No one is claiming that this approach will be easy.  And there are no guarantees that it can be fully successful.  But pre-emption is the way to go.

As to the unrest in Iran now (emphasis added):

“A senior member of the IRGC says orders came from top officials in Tehran to end the protests, the bloodiest action since 1979 revolution; ‘No more mercy, the protesters are aiming to topple the Islamic Republic.’”

Because the mullahs are ruthless, the regime may not come down.  But what is certain is that it is weak, and distracted.  Over 1,500 protestors have already been killed.  Fierce demonstrations against the economic situation that took place in November had been quelled.  But now, demonstrators are on the streets again, shouting “Death to Khamenei.”

“For decades, Islamic Iran has tried to expand its influence across the Middle East, from Syria to Iraq and Lebanon, by investing in Tehran’s political and economic capital and backing militias. But now it faces pressure at home and abroad.

“In recent months, from the streets of Baghdad to Beirut, protesters have been voicing anger at Tehran, burning its flag and chanting anti-Iranian regime slogans.”

“For 12 weeks, Iraqi protesters have massed in the streets of Baghdad and cities in southern Iraq to demand the ouster of the government, an end to corruption and a halt to the overweening influence of Iran…” 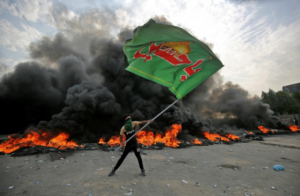 At the end of November, Prime Minister Adel Abdul Mahdi resigned under pressure from the street.  After weeks of political turmoil, an Iranian-backed bloc nominated Asaad Al-Eidani to replace him.  But the demonstrators are not having it:

“…We want a candidate who isn’t corrupt and [is] independent of the political establishment,” one demonstrator who was interviewed said. “Al-Eidani is part of the political system we want overhauled and so our demonstrations will continue until we get a prime minister who fits our criteria.” (Emphasis added)

What will follow from this is unclear, but almost certainly that unrest is not going to disappear.

Demonstrations in Beirut that began in October (see picture below) are also flaring again.  People are taking to the streets to protest the ruling elite because of horrendous economic conditions and instability. Prime Minister Saad Hariri was forced from power but turmoil prevented the selection of a replacement for some weeks. Now that Hassan Diab has been designated prime minister with Hezbollah backing, the protests are increasing. (This parallels the description of Iraq’s situation, above!)

In Lebanon there is a complex division of power with different sectarian groups participating – but the influence of Hezbollah, an Iranian puppet, overwhelms everything else; Hezbollah-backed elements control the parliament.

According to Makram Rabah, a lecturer at the American University in Beirut (emphasis added): 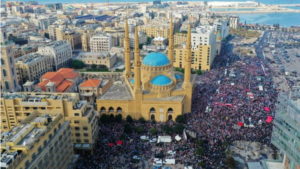 In short, Iran is floundering, if not failing.  With ruthless actions and political machinations, Iran forged control in Iraq and Lebanon, but there was certainly no concern for promoting governance for national prosperity and stability: The corrupt Iranian presence via proxies in these countries has been directed towards Iranian purposes. The people have had it, and the Islamic Republic of Iran is on the cusp of losing control.

The worst thing that could happen now is for leftist elements in the US government to push for a lessening of sanctions on Iran.  The fools in the Democratic Party who are insanely busy working towards impeachment of the president have not acknowledged the role that Donald Trump has played in weakening Iran! 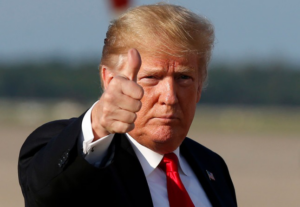 “As Tehran continues to dismiss these protests as inauthentic and foreign-led, demonstrators will only gain more momentum. While Iran grapples with the economic consequences of President Trump’s maximum pressure campaign, it may not be able to ultimately survive the onslaught of these dual protests.” (Emphasis added)

I note here that there is a way in which Iran is utilizing the chaos in Iraq to its advantage: Something of significance to look at in my next posting.

At the same time that Iran is struggling, there is a softening of the attitudes of Sunni Arabs towards Israel. Israel is not being embraced with open arms, but the signs of a significant shift are there, and they are real.

“A new narrative is emerging in the Middle East. New maps of the Muslim mind are being drawn and old hatreds are on the run. The anti-Semitic craze to destroy Israel was powerful in the 1960s…But now, Sunni Arab neighbours are changing course. Islamist leaders are losing their appeal — at a time when Iran, with its brand of theological fascism, poses a threat to Israel and the Arab world alike.

“…This generation [of young people] wants Arab leaders to increase economic prosperity and minimise political conflicts. And to build alliances, including with Israel.

“…the need to stand firm against Iran is becoming a cause that unites Israel with Sunni Arabs and anti-Tehran Shiite Muslims in Iraq, Syria and Lebanon.

“…most intriguingly, Israel is being seen by moderate Arab governments as a trade and security partner as the West sends mixed signals….As one Arab prince said recently at a private meeting: ‘Who else will fly in joint missions against Iranian targets with us?’

“…There are enough historical and scriptural narratives of Muslim-Jewish fraternity to form the basis for rapprochement. The enmity has, historically, been a recent blip. With an assertive Iran and an uninterested West, the Arabs and Jews have a shared interest in building a lasting alliance with each other. This may yet be the decade of peace.” 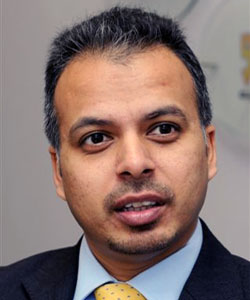 I have written about the painful situation of anti-Semitism in the American Black community, and so now am delighted to share this: a short video with comments by Larry Elder, a Black conservative lawyer, author, and radio show host.  Elder speaks about the ignorance within the Black community with regard to the history of Jewish-Black relations in the US and all that Jews have done to help the Black community.

This is heartening and merits broad sharing. I’m willing to bet a whole lot of Jews don’t know this history either. 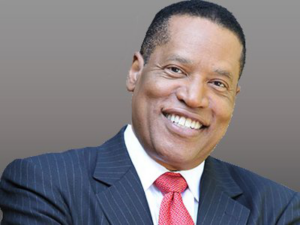 Elder acknowledges that about 30% of American Blacks are anti-Semitic.  He concedes this percentage is higher than that of other American groups. But it still means most Blacks are not anti-Semitic.

Today is the Likud primary, in which all members of Likud can cast their votes for either Binyamin Netanyahu or Gideon Sa’ar to head the party list; the primary for the full Knesset list was cancelled, and the list remains as it was the last time around.

Sa’ar is doing his upmost to achieve an upset and replace Netanyahu, but there is no real expectation that this is going to happen.  And so, I’m going to send this out without waiting for results.

There will be time enough in my next posting to do an analysis of the results – did Netanyahu come out looking invincible? – along with an update on our political situation.

I’m going to close with what I found to be an appealing version of “Al Hanissim” sung by the young Israeli couple Yamina: for the miracles, and the salvation we thank You.

We need song, my friends, to lift our spirits.