From Israel: A Mixed Report

In my last posting, I said I thought President Trump’s optimistic statements during his visit about Abbas wanting peace were just PR.  I cited Trump’s pointed statement to Mahmoud Abbas at their joint press conference, following their private meeting in Bethlehem, that “Peace cannot take root in an environment in which violence is tolerated…”

And I pointed out that Trump looked grim when he shook Abbas’s hand. 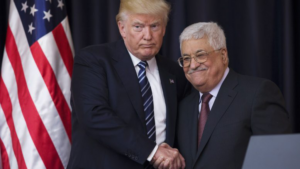 Just after that posting went out, a fascinating item made the news:

A US official who was present during President Trump’s meeting with Mahmoud Abbas was cited as saying that Trump was furious during that closed-door encounter:

Referring to Abbas’s March visit to the White House, he charged, “You tricked me in Washington!”

At that time, Abbas had assured the president that he wanted good relations with Israel and that his Fatah party was not involved in anti-Israel incitement. Trump subsequently learned from the Israelis that this was not the case.

This situation was first reported on Israeli TV and the report was then carried on various new sites.

But there was a question that had to be resolved: How could the president have been tricked?  How was it possible that he didn’t already know that Abbas incited?

For here was the head man, himself, swearing that his people were peaceful. 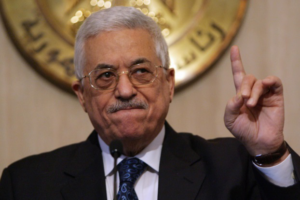 Without question, Trump, who was eager to push “peace” forward, wanted to believe Abbas. Who knows?  Perhaps he concluded that it was just fringe groups and not Fatah that incited.  Or that some of the accusations were politically motivated inventions.

What happened after that Washington meeting is that the Netanyahu government, working with Israeli Ambassador to the US Ron Dermer, took pains to transmit detailed facts to Trump.  At least some of these facts came from Palestinian Media Watch – https://www.palwatch.org/, which monitors the PA in Arabic and tracks details. (See more on PMW reports below.)

With specific details – numerous and damning – brought to the president, there was no longer room for shrugging off the accusations. This likely provided a rude awakening for the president, who certainly would have preferred being able to accept Abbas’s declarations of peaceful intent.

Donald Trump was not pleased.

This was good news.  It suggested that there might be a president prepared to hold the PA accountable.

The readiness to turn a blind eye to the behavior of Palestinian Arab leaders goes back even before Obama.  Bill Clinton had the terrorist Arafat to the White House more than any other world leader.

Now it seems we have turned a critical corner at long last.

Yet, while that corner may have been turned, I do not mean to suggest that we are home free.

Trump was furious with Abbas, but he has not thrown up his hands and declared, “That’s it!  I see what these guys are now.  It’s clear Israel has no partner for peace.”

I would like to assume that Trump will be more circumspect with Abbas, less ready to trust (although Abbas is now claiming he was framed by the Israelis).

But the evidence is very clear that he still sees Abbas as the only potentially viable candidate for “peace partner” and that he will continue to try to move forward.  Perhaps he imagines – foolish him if he does – that he can straighten out the Palestinian Arabs.

“I want to tell you…this president is determined to get a deal.

“It is true that there are warm relations and there is a lot of understanding for our basic positions, but it is not true that we have a blank check; that is far from the reality.”

Unfortunately, how right our prime minister was!

The news has now broken, several hours before the legal deadline, that President Trump has signed the waiver, which means the American Embassy will remain in Tel Aviv and not be moved to Jerusalem, as he had promised. 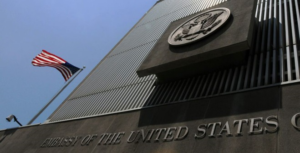 It almost feels anti-climactic at this point, with all the discussion we’ve had on the subject.

Note what a top US official said about the decision not to move the Embassy (emphasis added):

“It’s a question of when, not if.  He doesn’t think the timing is right, right now.

“In timing such a move he will seek to maximize the chances of successfully negotiating a deal between Israel and the Palestinians.”

This means Trump is more worried about not angering the lying, inciteful Palestinian Arabs – in order to secure their cooperation – than worried about pleasing Israel.

Same old, some old, is it not?

What happened to Trump’s knowing?

(For the record, legally, Trump will have his next chance to move the embassy in six months.)

“We are a sovereign country, we can decide on many things and declare many things, but as far as the consent of the Americans goes I would not go that far.” (Emphasis added)

If we truly believe ourselves a sovereign nation – as indeed we must – then we do not require the consent of the Americans in order to act in our best interest.

I think it is important to back Netanyahu, encouraging him to have the necessary strength in this regard.  More on this is certain to follow.

Now, in response to the decision on the embassy, the prime minister, declaring an appreciation for President Trump’s friendship despite his disappointment about the decision, observed (emphasis added):

“The existence of embassies outside the capital distances peace, because it contributes to the revival of the illusion that the Jewish people and its state have no connection to Jerusalem.”

“President Trump is a true friend of Israel. That’s what makes the failure to move the embassy such a huge disappointment. This is not the way to make America great again.”

“There is no peace based on the division of Jerusalem.

“Only recognizing a united Jerusalem under Israeli sovereignty will end illusions and pave the way to a sustainable peace with our neighbors.”

The fact that there were allusions to Trump’s friendship coupled with the sense of disappointment and frustration reflects, I think, the enormous ambivalence that many are feeling now.

Trump is going down the wrong road, chasing a chimera.

Yet he is definitely not Obama. Or Bush. Or Clinton.  He is not speaking about “two states” or a “Palestinian state.” He is not referring to the “1967 border,” either.  Or “illegitimate” settlements.

Precisely where he is going is difficult to determine, as he has been so vague.  My impression is that he hasn’t made up his own mind yet.

After Trump’s meetings here, he was followed by his envoy, Jason Greenblatt, who asked the two sides what they would like to see in an agreement. He then returned with some of the suggestions outlined, hinting that the White House may put out a “statement of principles” for a “peace plan.”

Netanyahu then told that same Likud faction that:

“The current administration fervently wishes to put something on the table. We have positions that are important for us, but that doesn’t mean that these are acceptable to them.”

On the other hand, the PLO Action Committee, headed by Abbas, has met and put out a statement indicating that they are not happy with the US suggestions they’ve seen so far.

They will continue to adhere, they said, “to the international law (sic) on establishing an independent Palestinian state whose capital is Jerusalem according to the 1967 borders…”

How long will it take Trump to perceive that a deal with these people is not possible?

Let me conclude for today by circling back to an additional PMW report of significance:

Palestinian Media Watch last week reported that a youth center built in the Burqa village in the Palestinian Authority, supported by a PA ministry, UN Women, and the government of Norway, had been named the “Martyr Dalal Mughrabi Center.”

The infamous terrorist Dalal Mughrabi led a group of terrorists who, in 1978, hijacked a bus and murdered 37 Israelis, including 12 children.

A member of the Burqa council explained that “the center will focus especially on the history of the struggle of Martyr Dalal Mughrabi and on presenting it to the youth groups, and that it constitutes the beginning of the launch of enrichment activities regarding the history of the Palestinian struggle.” (Emphasis added)

My friends, if we must encourage Prime Minister Netanyahu to stay strong for Israel’s sake, we also have to encourage President Trump to face the ugly truth about the PA, even when it is difficult to swallow.

**This must be done consistently**. It is a way of helping the president to be strong, as well.

Put this information out wherever you can.  And please send it to the president. Ask him, respectfully, if we are dealing with a “partner for peace”:

There is a good news side to this situation, for we see the political climate is changing, albeit slowly:

In short order after the PMW report, UN Secretary General Antonio Guterres condemned the naming of the center and announced that the UN was disassociating itself from it.

“The glorification of terrorism or the perpetrators of heinous terrorist acts is unacceptable under any circumstances,” said Guterres.

And Norwegian Foreign Minister Børge Brende demanded that the PA return Norwegian funds given for the project and remove the Norwegian logo from the building.

Denmark, in response to a request by the Netanyahu government, has ordered a review of its funding to the PA.  According to Danish Foreign Minister Anders Samuelsen, Denmark wants to be certain that its funds are being used in positive ways.

“It’s possible that following the inquiry we’re carrying out, we will have to halt funding for some Palestinian organizations.”

Now here is the clincher:

The Burqua council refuses to back down on the name of the youth center.

“The center has no intention of caving in to the pressure and changing its name, the head of village’s council, Sami Daghlas, said… He said the name Dalal Mughrabi was chosen by the villagers to commemorate a Palestinian hero who sacrificed herself for her country and therefore they have no intention to change its name regardless of the price.”  (Emphasis added)

Remember that the PA is associated with development of this center.