It pleases me to begin with mention of Tu B’Shvat, which starts tonight.  A holiday with religious significance in the Mishnah (as the “New Year of the Trees” with regard to how years are calculated for harvest of fruit), Tu B’Shvat has become very much an Arbor Day here in modern Israel: a day for the honoring and the planting of trees, as well as a day for eating the fruit of the tree — especially the Biblical fruits, grapes, figs, pomegranates, olives and dates.

We have been blessed this year with more rain than we’ve had for several years — rain which still continues.  Because of this the landscape is so very green. And, as is expected, the earliest of the blossoming trees, the almond, has begun to flower — the harbinger of spring. 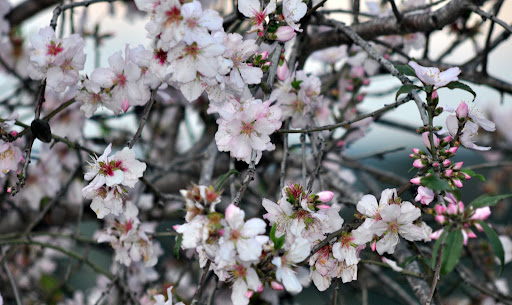 How much more lovely to speak of almond blossoms than Fatah and Hamas, but that’s our focus now:

Khaled Abu Toameh has reported in the JPost that Fatah and Hamas have reached a unity agreement.  This reconciliation accord, signed by Mahmoud Abbas and Khaled Mashaal, is being referred to as the “Doha Declaration” — it was mediated by the government of Qatar in Doha.

Under its terms, Abbas — currently functioning as president of the PA, although his term has expired — will be the interim prime minister of a government consisting of “independent figures.”   There is no mention of whether Salam Fayyad, whom Hamas has consistently opposed and Abbas has just as consistently promoted, will play a role.

The primary function of this government is to prepare for presidential and parliamentary elections and rebuild Gaza.  No date has been set for elections, which might be held as soon as in 90 days, or not until later in the year.

Other issues addressed include the release of “activists” on both sides, opening of closed institutions, lifting of travel bans, and permitting members of Fatah to return to their homes in the Hamas-controlled  Gaza Strip, which they had fled.

Abbas and Mashaal have agreed to hold a meeting of the (recently selected temporary) leadership of various Palestinian groups on the 18th of this month in Cairo.  At that time, implementation of the agreement is to be discussed, as well as incorporation of Hamas into the PLO.  After that meeting, the full interim government will be announced.

That’s as it is planned now.  But the 18th is still 11 days away.  And since not everyone in Fatah and Hamas is on board with this accord, it remains to be seen what the ultimate result will be.  Both Abbas and Hamas must still convince their respective party members that the agreement is a desirable one.  Abu Toameh, in a separate JPost piece, cites Palestinians who think this accord may yet lead to splits in both Fatah and Hamas.

My own initial response, on reading about this agreement, was astonishment at the willingness of Hamas to allow Abbas to hold the position of interim prime minister in the newly agreed-upon government.  I am convinced that there was a time when this could not have happened.  As I followed prior Fatah-Hamas accords and attempts to reach agreements, it was consistently my observation that Hamas called the shots and Fatah acceded.

Its current willingness to provide the head of Fatah with a key position signals the weakening status of Hamas: This group has lost its funding and walked away from its headquarters in Damascus.  No other nation has yet agreed to take them in — not Egypt nor Jordan nor Turkey; they are said to feel that relocation in Gaza would render them too vulnerable to Israeli attack.  Politburo leaders seem to be wandering the area.

My guess would be that Mashaal, at least, sees an accord with Fatah as strengthening Hamas’s hand and its base.  I will note that one immediate advantage is the release of Hamas people being held in PA prisons — Abbas has announced the release of 64 such persons.  There have already been reports from the IDF regarding increased Hamas activity in Judea and Samaria; it has long been the Hamas goal to take over this area, just as it took Gaza.  Additionally, I suspect that Hamas officials hope for an enhanced image and increased legitimacy in the international community as a result of this deal.  The Hamas aspiration to be in control of the PLO is likely a motivating factor, as well — a way to boost its power and influence.

But there are Hamas activists and officials — though Ismail Haniyeh is not among them — who are furious at the idea of placing Abbas in the position of prime minister.

Abbas had long played a game of fluctuating between forging a unity government and negotiating a “peace” with Israel — one day heading in one direction and another day in the opposite.  He has come to a dead end on the Jordanian supervised indirect or preliminary talks and declared that he could move no further without specific Israeli concessions.  But he is under pressure to continue.  Could be that he decided that this was the time to switch gears and shift the dynamic.

Prime Minister Netanyahu has already made it very clear that for the PA it’s either negotiations with Israel or an accord with Hamas, but not both.  Not that Abbas cares, but it’s important to put Israel’s cards on the table up front with regard to the international community.  Israel cannot be expected to negotiate with a Hamas-affiliated PA or to accord it “confidence-inspiring measures.”

In his statement Netanyahu pointed out that Hamas has not accepted the three minimal requirements of the international community: recognizing Israel’s right to exist, abandoning terrorism, and accepting previous agreements, but instead “continues to arm itself for even deadlier terrorism.”

When I read, as I did today, that an Israel official said that “…this agreement would lead to the end of the peace process,” I wanted to ask if he was joking — if he thought there was a peace process before this agreement.  But this is simply part of the way it has to be played (or they imagine it has to be played): See world, we were ready to continue, but Abbas blew it.

At any rate, it has been announced that Israeli work on putting together a package of economic “incentives” to keep the PA talking at a low level has been put on hold.  That’s quite fine. These “incentives” were, of course, being developed at the behest of the US and the EU.

The US has no official position yet on this development, as it is still “speculative.”

The EU does not have an official position yet either.  However, as Abu Toameh points out, at the end of November the EU called for PA reconciliation with Hamas, referring to it as “an opportunity rather than a threat — an important element for a viable Palestinian state, and essential for securing a lasting peace with Israel.”  Yes, the EU gives lip service to the three requirements of Hamas, as stated above, but you can see where the Europeans are headed.  They would turn themselves into pretzels finding ways to legitimize a unity government.

Wow!  A veritable genius!  Dennis Ross, formerly a US Mideast envoy, speaking at the Aspen Institute, said he believes this is not the right time for a final peace agreement between Israel and the PA:  “Right now I don’t think the contest lends itself very well to producing a permanent status deal.”

Consider the state of affairs, if such a common sense observation has to be noted as something special.  What he said additionally was that he believed the situation should be regarded from a position of “humility.”  By which I understand that he thinks those officials making pronouncements about what they can accomplish would be wise to close their mouths.

Even though the situation is on hold for the moment, I want to call your attention to a cogent analysis by Shoshana Bryen (formerly with JINSA and now with the Jewish Policy Center): “No More ‘Peace Talks,’ Please.”

And then, a delightful, although ultimately very serious, piece by Barry Rubin, “When the Moderates are Radicals You’re in Trouble.”

“And they will never surrender to reality. Here are the two main causes of error:

“-– They think the Middle East is just like the West so they can extrapolate from their own experience… You are not Arafat or Khomeini or Saddam Hussein or whatever and unless you have some understanding of how they actually think-–and not your own Western pragmatic interpretation of what they should think–-there’s no sense in discussing it.

“-– They think the Middle East is just what they’d like it to be. Peace? Easy. They have a plan. My response: I’d love to hear your plan but I’m all booked up to hear Middle East peace plans for the next three years. I’ll put you on the waiting list and get back to you…

“The Middle East is so strange in Western terms, so different — having its own unique history and institutions — that unless you are really aware of those differences please pick something else to be an expert on…”

Rubin’s piece is about Egypt and you can learn by reading it in its entirety. But I love this introduction because it applies to so much I deal with, so much that I have trouble explaining to people.  Judging the world, and in particular the Arab world, by Western standards and principles is a huge mistake.