Before beginning my discussion about the Mount, I am delighted to be able to share good news:

Some days ago, I sent out an e-mail about a 16 month old boy — Rafael Zakkai Avraham ben Yakira Avigael  — who had a very rare cancer in the spine.  The situation sounded dire and I asked for prayers.  The news now is that the child was misdiagnosed: the tumor in his spine is benign.  The parents were very cautious about accepting this new diagnosis prematurely, but have now had confirmation from two labs. Baruch Hashem.

What this means is that this poor baby will not need intense chemotherapy, and the tumor will not metastasize.  But he will still require complicated surgery on his spine.  The prayers are working, writes the mother — please, keep praying!!

Now to the Mount of Olives (Har HaZeitim), which is on the periphery of eastern Jerusalem.

Found on the Mount is the oldest cemetery in Jewish history, dating back 3,000 years and containing some 150,000 graves.  The earliest burial caves date from the First Temple; the cemetery is still actively in use today.

Those buried on this site constitute a cross section of Jewish history — from prophets to Torah sages to political figures.  (See a list of notables here: http://harhazeisim.org/notables.)

The Mount of Olives cemetery truly is a national heritage, to be preserved and treasured. 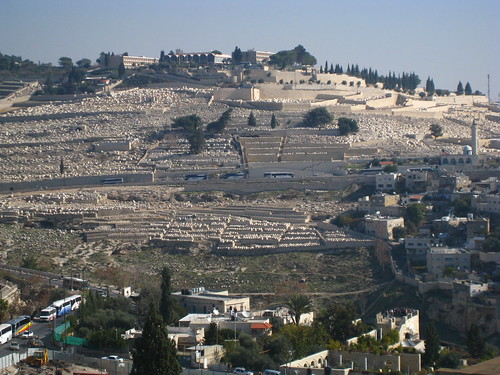 Unfortunately, the cemetery is in trouble.

At the end of the War of Independence in 1949, eastern Jerusalem — and with it this cemetery — was in the hands of the Jordanians.  The armistice agreement signed between Israel and Jordan included an understanding that Jews would be able to visit the graves, but the Jordanians did not honor this.  The reason became clear in time: When Israel liberated this site in 1967, it was discovered that 75,000 graves had been desecrated by the Jordanians.  In the most massive destruction of Jewish graves in history, the Jordanians had removed tombstones to build roads and to use as latrines.

Some repair work has been done over time, but damage still exists.  What is more — the damage continues to this very day.  Local Arabs come into the cemetery with the deliberate intention of destroying tombstones. 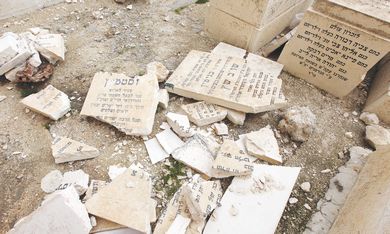 Additionally, they — young men and teenagers — throw stones at those coming into the cemetery. More than one mourner has been injured at the graveside of a loved one; it has become practice for parties visiting the cemetery to come with armed guard.  A situation of outrage.

It is to the credit of the current government that it has addressed some of the problems of the cemetery, but efforts are not yet sufficient.

In 2010, American Rabbi Avraham Lubinsky, visiting his parents’ graves on Har HaZeitim, was horrified to find desecrated graves adjacent.  This motivated him to found the International Committee for the Preservation of Har HaZeitim, which has done wonderful work since its founding and has helped to call the issue to public attention.

It is fitting that it should be an international committee that took on this challenge, for Jews from all over have loved ones buried here.  It was the International Committee that called the meeting at the Great Synagogue on Motzei Shabbat (Saturday night).  What became clear is that there is still much work to be done, but great strides have already been made.

Speakers during the course of the evening included Avraham’s brother, Rabbi Menachem Lubinsky, a member of the Committee, who ran the program; Deputy Foreign Minister Danny Ayalon;  Malcolm Hoenlein, Vice Chairman of the Conference of Presidents of Major American Jewish Organizations and a member of the Committee; and Members of Knesset Yitzhak Herzog (Labor) and Tzipi Hotovely (Likud).

In summary, they made a number of significant points:

What is challenged with the attacks on the cemetery is the sovereignty of Israel over eastern Jerusalem.  As well, there is attempt to write out the 3,000 year connection of the Jews to this land. Thus the issues transcend the desecration of individual graves, as significant as this is by itself.

It is imperative for Israel to gain full control over this site and to restore it.

Making this a priority can speed the remedies that are required. As the members of the Knesset present made clear, there is so much that the Knesset is concerned with from day-to-day that this issue gets shelved.  Herzog and Hotovely pledged to bring the matter vigorously to the attention of the Knesset.  Once this happened, they felt confident that everyone would be on board with regard to necessary measures: this is not a controversial issue.  And, indeed, it was in the news today that the Knesset Committee on Immigration, Absorption and the Diaspora would be holding a hearing on the situation (this committee because of major diaspora involvement).

Resolution to the major problems — either anticipated or already in process:

— Legislation must be passed to levy stiff punishment, including prison time, against vandals who desecrate graves.  Where minors are involved, the parents must be held responsible.

— All breaches in the wall around the cemetery must be closed.

— The roads leading to the cemetery must be secured.  There are Arab neighborhood around the area.

— Better communication with those adjacent Arab neighborhoods is necessary. Local Arab residents must be stopped from using the cemetery as a shortcut and football field (acts of disrespect).

— A police presence must be on the cemetery grounds at all times.  The way the situation is now, the damage has been done, and the perpetrators have fled, before the police get to the site once they are called. Minister of Internal Security Aharonovitch has announced that in two weeks there will be a police station on the Mount, with some 25 police officers assigned to the site; if it turns out more are required, they will be brought in.

— The cemetery must be well lit.  Lights are up or going up.

— Security cameras are required. Some 90 are now in place, with 137 promised in all.

— Restoration of all vandalized gravestones.  Much work has been done on this, and continues to be in process.  The goal is an additional 20,000 gravestones restored in the next few years, but there must not be more vandalism if it is to be met.

— Regular maintenance of the site is necessary — this is a municipal responsibility.

The point was made, as well, that there should be beautification of the site, because it is a national treasure.  And education about the site: Just a there are regular tours to the national cemetery on Mt. Herzl, so should there be here — run by Egged, special school trips, etc. — with explanations regarding those who are buried in the cemetery and signs identifying the location of graves.

This instills Jewish pride in our ancient heritage, and lifts morale.

Yet another problem, which is more difficult to address — but which I hope to write more about in time — is the presence of an illegal mosque, built stealthily, on cemetery grounds.

In addition to all the speakers mentioned above, the audience also heard remarks from Congressman Elliot Engel (D-NY) and Congressman Jerald Nadler (D-NY).  They were on their way to the airport to return to the States, but felt it important to address the gathering briefly, first.

The day before, Friday, they had been taken to Har HaZeitim by Rabbi Avraham Lubinsky and Malcolm Hoenlein to see the desecration of graves.  While they were there, a large rock was thrown at them.

Congressman Engel said that while he expected old destruction he was surprised to see the fresh vandalism.  As to the rock thrown, he intends to report to his Congressional colleagues and to work on the issue until he sees resolution.

Congressman Nadler said the desecration of graves is unforgiveable — an attempt to deny history and a crime against humanity.  This is an act of hatred by young people, he declared, and the parents who teach this hatred must be held accountable.

Below from right: Congressman Nadler, Congressman Engel, Rabbi A. Lubinsky and Malcolm Hoenlein. 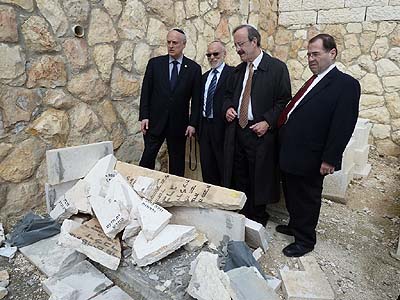 A great deal more information, and photos, can be found here: