My friends, how long can we monitor the current political situation without feeling weary to the bone – no, even more, revolted – because of what is taking place.

Here in Israel, the left is using Bibi’s upcoming speech in the Congress as a weapon with which to attack him.  For shame.  Buji Herzog declares that he is as much against a nuclear Iran as our prime minister is, but he would handle matters differently: He would cancel the talk in Congress and meet privately with Obama.

Given this information, we must ask: Is he enormously naïve and self-deluded?  That is, does he really think he might sway the president in the slightest? Or is he a poseur – knowing the reality well enough but pretending in order to lend the impression that he could handle the relationship with the US in a manner that would reduce current tensions and still achieve our essential security goals?

Part of what makes me crazy is that, according to the polls, there is some percentage of the Israeli electorate that actually sees him as the best candidate for running the country.  Well less than 50%, it is true. But still…

And there is something else that makes me crazy.  According to those very same polls, the percentage of the electorate that would want him to be prime minister is smaller than the percentage that says it would vote for Labor…I mean, the Zionist Camp.

But hey, guys, if Labor/the Zionist Camp gets the most mandates (Heaven forbid!) and is able to put together a coalition, Buji would BE prime minister.  Is this not clear to the people answering the polls?

Here we have a picture of Tzipi Livni, Buji’s running mate in the Zionist Camp campaign, listening to him speak. She is definitely not one of the swiftest of the candidates, but here I begin to wonder if she’s on to something: 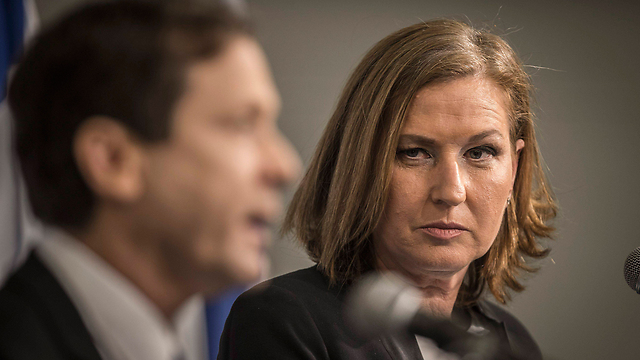 It was suggested in several quarters that, in order to show a united Israeli front to the world, Buji accompany Bibi to Congress.  Buji declined.  Then he announced that he had been scheduled to speak at the AIPAC convention next week, but was cancelling. He can speak out against a nuclear Iran, he declared, but can do it quite well from here in Israel.  This was supposed to convey the impression that he was more statesman-like than Bibi.  But I think he made a tactical error.  That’s fine.

The prime minister has made it crystal clear that he will not be backing down and will indeed speak in Congress on March 3rd, as scheduled.

He has turned down the offer I wrote about in my last posting, to address Democrats privately.  This, he said, would be interpreted as a partisan action, and he intends to do nothing but address the issue of Iran’s nuclear ambitions and radical Islam – to both parties in Congress. There will be nothing partisan in his statements or his actions in Washington.

Last night, at a Likud meeting, he said:

”From the agreement that is forming, it appears that they (world powers) have given up on that commitment (to thwart Iran) and are accepting that Iran will gradually, within a few years, develop capabilities to produce material for many nuclear weapons.  They might accept this but I am not willing to accept this.” (Emphasis added)

Meanwhile, as would have been expected, Obama and his team of flunkies are doing everything in their power to tear the Israeli prime minister apart.

Let me remind one and all that it is the president who is responsible for the internal party tensions, not Bibi.  All Obama had to do was announce that he felt confident that his negotiating team was taking the correct path with Iran, but Prime Minister Netanyahu was certainly welcome to come and speak on such a significant subject.  Instead, he is sending his team, like attack dogs, to go after our prime minister.

I would further point out, again, that our prime minister was invited by the speaker of the Congress, who had a legitimate right to extend that invitation, and that Congress has a role to play in this critical matter – and thus a right to be as well-informed as possible – even if Obama wishes to circumvent the legislative branch of the government.

Former US Secretary of Defense (from 2001 to 2006) Donald Rumsfeld declared today in a statement to Israel Hayom:

On Tuesday, we had Susan Rice, National Security Advisor, saying that Netanyahu’s intention to speak to Congress is “destructive of the fabric of the relationship” between the US and Israel.

A day later, Secretary of State Kerry was saying not only that Netanyahu was “uninformed,” he was just plain “wrong.”

Kerry, he said, “might not know everything we know.”

Steinitz explained that, “We know all that we need to know, and we have an excellent picture of the negotiations.”

He explained that Israel is in touch with French negotiators (by choice, the US is apparently out of this loop) who are dealing directly with Iran, and are thus well-versed in the details of the negotiations.

What is more, it is the information that has reach Israeli officials so far that has generated the greatest concern.  Steinitz acknowledged that the friendship with the US is a strategic asset, but “when it comes to the security of the State, we are also ready to fight.”

Steinitz is on the right in this picture, with Yossi Kuperwasser.

I wrote last about my conversation with Yossi Kuperwasser, and here I present an important new paper he has done for BESA, “The Struggle over the Iranian Nuclear Program”:

“Thus Iran: continues to develop its arsenal of missiles; avoids providing information about its weapons activity and achievements; continues to enrich uranium using around 9,000 centrifuges of a relatively low-yield model, including at the Qom facility; maintains around 10,000 additional centrifuges that have been installed but are not yet active, most of them of the same type, but some more advanced; continues to develop different types of more advanced centrifuges, which it will be able to make operational should it need to do so; and continues to hold some 7.5 tons of enriched uranium to a level of 3.5% (which represents around half the investment in enrichment required for military-grade material). Once brought up to a 90% enrichment level, this would be sufficient fissionable material to make four or five atomic bombs…

“It is possible to say that the fact that Iran has not yet developed nuclear weapons, in spite of the 27 years in which it has been trying to do so, is due in no small part to Israel’s efforts…Thus the claims made that Iran’s success in proceeding towards the attainment of nuclear weapons represent an Israeli failure, are themselves worthy of ridicule. Without Israel’s actions, Iran would have obtained nuclear weapons several years ago, and moreover, it is thanks to Israel’s actions that Iran is unlikely to obtain nuclear weapons for many years to come, even if an agreement is reached that does not meet Israeli expectations… (Emphasis here and below added.)

“Western leaders, with Obama at their forefront, believe in the almost exclusive use of dialogue as a means to address disagreement. They believe that Muslim perspectives in general, and Iranian perspectives in particular, of the West as a historical oppressor that has wrought great harm to the region, contain an element of truth that needs to be acknowledged. They are convinced that the burden of proof as to the good intentions of the parties to the current negotiations falls first and foremost on the West, and in accordance with their liberal outlook, believe that all people share essentially similar and equally worthy values and aspirations.

“On the other hand, the leaders of Iran, who are driven by a sense of mission that is both Islamic and revolutionary Iranian-nationalist, believe that it is their duty to bring about a wholesale change in the world order, using a combination of cunning, force, and daring, and making the most of the freedom of action afforded to them by the reined-in West. They are convinced that the West has no values whatsoever, and is unworthy of its current preferred status in international affairs.

“As a result, the talks between the powers and Iran are not conducted in a manner reflecting the true balance of power between them, but rather the exact opposite. It is Iran that dictates the agenda, while America and the West attempt to placate the other side, and are hesitant about bringing up issues that they fear Iran will refuse to discuss, lest they be accused by Iran of lacking serious intent in the negotiations…

I end with an amazing video, showing who we are, in several different respects (with thanks to Chana G.):

(I am recommending this video only, having not reviewed what follows automatically.)