What’s negative?  Oh, I won’t say everything. Should never say that.  But there’s a great deal that is, and the sense one gets when surveying the situation is an enormous weariness.

Let’s begin with coalition formation here in Israel.  PM Netanyahu was given 28 days to form that new coalition.  By my calculation, his mandate from President Peres began on February 3, which brings us to this Sunday, March 3.  He can then request an extension of 14 additional days. After that, if he has no government, he will have struck out.

Maybe he will get his act together.  A good number of people continue to think so. (See the latest news, below.) But he’d better hustle.  So far, the only one officially on board is Tzipi Livni and her party of the same name.  Already there’s dissension within her party, because she seemed to have passed over number two on the list, Amram Mitzna, for number three, Amir Peretz, with regard to a ministry.  Although this is hardly worth belaboring, it gives a sense of how disorganized, how unpleasant, matters are.

Good old Tzipi. She has given an interview to (the US) Channel 2’s program “Meet the Press,” during which she said that she objected to construction in E1, as well as in the northern Jerusalem neighborhood of Ramat Shlomo.  We should renew negotiations with the PA, she said (although she did not indicate how that would happen if the PA was unwilling to do so) and “avoid provocations that only turn the world against us.”

No surprise that she would say this — it’s a reiteration of her earlier refrain as foreign minister. But it remains just as offensive as it was the first time around.

As to the building in Ramat Shlomo, it’s been on the books for years.  It was back in 2010 that a routine announcement was made about the building while VP Biden was here. The Americans went ballistic, claiming we had embarrassed the vice president, and so the project was shelved.  That is, until this past December.  As I write, no actual building has been started.  And if Tzipi had her way, it would never start, so as to keep the US and EU content.

Neither Bennett of Habayit Hayehudi or Lapid of Yesh Atid have yet joined the coalition.  And there is question as to whether Shas will — and whether Shas and Yesh Atid will sit together. As well as whether Lapid and Bennett will continue to honor their reputed agreement that neither would join the coalition without the other.

We are facing a world that is smoldering and close to going up in flames, and the first order of business now should be coming together in strength to cope with the threats Israel faces.

And so I have had limited patience with the fact that, at least until now, coalition discussions have reportedly revolved around such issues as whether hareidi yeshiva students will have military deferments until age 21 or age 24, whether there will be 200 exemptions or 1,000.  Yes, these issues must be resolved, slowly, in my opinion.  In the long run it’s important for the country.  But first things first.

The qualified positive news — as I write — is that Bennett has said that for the first time negotiations with Likud are making progress: “have finally begun to deal with essence [policies that would be adopted by the government]. This is good news.” 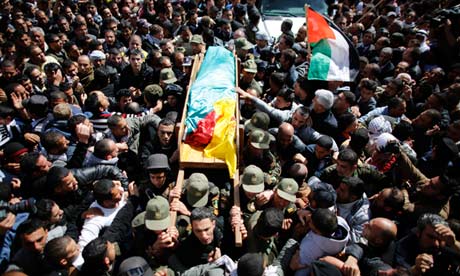 The next meeting between Likud-Beitenu and Bayit Hayehudi is said to be critical.  And Yesh Atid?  Not part of these negotiations, apparently — although Lapid is aware of them.  He has to make a decision as to whether to also join the coalition.  (That means, the way I’m reading it, that it’s not that he’s being excluded, which would mean Bennett broke the deal, but that it’s not clear if he wants in.)

Let’s look, briefly, at some of the ways in which the world is smoldering:

The Palestinian Arab violence in Judea and Samaria has not abated, but, if anything, has increased.  This is all about the prisoners, but now with a new hook.  On Saturday, Arafat Jaradat, who had been arrested because of his involvement in street violence, died in the Megiddo Prison.

His death is said by Israeli authorities to be the result of heart failure.  At first it was thought a heart attack killed him.  An autopsy, which ruled that out, has found no evidence of foul play and no definitive reason for his death.  Some signs of external injury were found that are consistent with attempts to resucusitate him — such as broken ribs, but not sufficient to explain his death.  More tests are being run.

See here for an article about how CPR resuscitation can legitimately cause broken ribs and more:

The Palestinian Authority is claiming that he died as the result of torture.  Declared Abbas, “Israel wants anarchy by killing our children.”  The funeral, attended by thousands, was in the village of Sa’ir near Hevron yesterday.  Jaradat was given a 21 gun salute at his funeral.  A hero. A martyr. PM Netanyahu has sent messages, both directly and via third parties, to the Palestinian Authority, telling them to use their influence to cool the riots. This was seen as a way of telling Abbas that he was seen as having control here.

There are at present varying opinions at the whether the violence will cool down.  Right after the funeral, it was high.  Roughly 150 Arabs tossed Molotov cocktails, and improvised grenades at IDF soldiers at Rachel’s Tomb near Bethlehem, endangering worshippers at the Tomb as well.  There were also 500 rioting in Beitunya, 100 rioting near Kalkilya, and clashes between some 50 Palestinian Arabs and Israeli security in Beit Omar. Another 200 rioted in Beit Anunu, while Hevron was the site of violence as well.

A statement by Abbas yesterday, however, is being interpreted by some as a sign that he did want to cool it without seeming to back down:  “We know how to act and we won’t allow them [Israelis] to drag us to their square.”

Seems to me wishful thinking, as the violence has continued during the day today.

There are two interpretations of what this violence now is about.

One position maintains that this is the beginning of a new intifada and the other, that this is a tactic being employed before Obama visits. The two positions are not mutually exclusive.

Khaled Abu Toameh says this:
“There are many signs that the Palestinian Authority is seeking to escalate tensions in the West Bank ahead of US President Barack Obama’s visit to the region next month.

“The officials hope that scenes of daily clashes between Israeli soldiers and Palestinians in the West Bank will prompt Obama to exert pressure on the Israeli government to make far-reaching concessions to the Palestinian Authority.

“This is why the Palestinian Authority leadership has been encouraging its constituents lately to wage a ‘popular intifada’ against Israel, each time finding another excuse to initiate confrontations between Palestinians and Israel.

“…By encouraging a ‘popular intifada,’ the Palestinian Authority leadership is hoping to bring the Palestinian issue back to the top of the agenda of the US Administration and Israel.

“Palestinian Authority officials have in recent months expressed concern over the lack of interest in the Palestinian issue both in the US and Israel.

“The Palestinians have been absent from speeches delivered by Obama over the past few months, and the majority of parties that ran in the last Israeli elections did not even mention the Palestinian issue.

“But now that all eyes are once again turned toward the Middle East in anticipation of Obama’s planned visit, the Palestinian Authority is working hard to draw the world’s attention to the Palestinian issue, and hoping to achieve its goal by encouraging clashes between Palestinian protesters and the IDF and Jewish settlers in the West Bank.

“Although the violence has thus far remained on a low flame, it is expected to intensify as the date of Obama’s visit approaches.” (Emphasis added)

Note that Abu Toameh says, “…the Palestinian Authority probably does not want an all-out confrontation between Palestinians and Israelis at this stage,” which means they may seek a larger confrontation later.

But even if the PA intends to foment only a “mini” intifada, matters could well get out of hand.

What fascinates me is that the PA believes that by behaving violently they can gain points with Obama. They are not necessarily wrong.  But how perverse is this situation.  Violence works.  The Palestinian Arabs should receive concessions when they’ve put aside violence, and show eagerness for genuine compromise, and only then.

A Grad Katyusha rocket was fired from Gaza into Ashkelon this morning.  The first time that this has happened since the end of Operation Pillar of Defense in November.  No one was injured but a road was damaged.

A connection between this and the increased violence in Judea and Samaria?

According to several sources, Assad has fled from the border area of the Golan, which is now controlled by rebel forces.

“The regime wants the rebels to take control of all villages on the border area so that Israel intervenes in the conflict, and then Assad can accuse Israel of conspiring against him,” according to Aiman Abu-Jable, an anti-Assad activist on the Israeli side of the Golan.

There are reports that Hezbollah leader Hasan Nasrallah has flown to Iran for treatment for cancer.  According to the Voice of Lebanon, he has severe cancer-related complications. Hezbollah is denying that he has died.

Top of the list in terms of our smoldering world is Iran/Hezbollah. But the subject is sufficiently complex so that I have decided to table serious discussion for my next posting.

I  will close with a very positive, inspiring Youtube — “This is Israel: Resilience.”  We have so very much to be proud of.  With all the frustrations, Israelis are special.