This first item takes precedence over everything else I may write today: Yesterday I received an e-mail from Minka G., an acquaintance of mine from Maryland.  She wrote:

“Would you kindly ask your community to pray for my grandson? He is 16 months old and has a terrible cancer that there is no known cure or treatment for.”

She is particularly eager to have prayers said for him in Israel, so those of you who do live here please take note and spread the word.

But wherever you live.  Pray.  Put his name on misheberach lists and lists for tehillim.

If you would like more information, you can go to caringbridge.org/visit/zakkai.  There his mother has posted his story and pictures (one of which you see above).  I read the story — which is particularly poignant — and learned that there is no record of the type of cancer that has afflicted this child ever having appeared in a baby. The doctors are stymied.  This truly is in the hands of Hashem.

Here I want to return to the theme of the need for Israel to be strong in asserting her rights and sovereignty.  There are several issues to examine, only a couple of which will be touched upon today.  I envision this as on-going:

Last week, the Ministerial Committee for Heritage Sites approved funding (72 million shekel in total) for “renovation and empowerment” projects to upgrade or restore 13 heritage sites across the country — a mix of sites including archeological locations, museums, and more are involved.  A good thing. An excellent thing, actually.  At least one these sites is beyond the Green Line, in Samaria: Tel Shilo, an archeological site, where the Ark of the Covenant rested in Biblical times, near the modern community of Shilo .

However, two other sites over the Green Line, in Judea, were notable for their absence from the list of sites to receive funding: the Machpela (Cave of the Patriarchs) in Hevron, and Kever Rachel (Rachel’s Tomb), right outside of Bethlehem (which is now fortified because, while under Israeli control, it is in PA territory). Both are explicitly mentioned in the Torah and are among the oldest of Jewish sites. 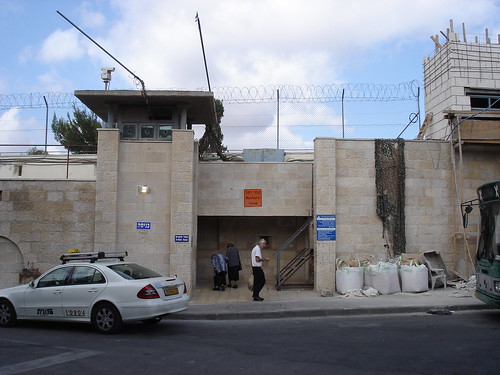 In theory, both the Machpela and Rachel’s Tomb remain recognized Israeli heritage sites. But MK Aryeh Eldad (National Union), co-chair of the Knesset’s Land for Israel lobby group says that failure to fund these sites is tantamount to their removal from the National Heritage program.

The Prime Minister’s office says these sites simply do not meet necessary criteria for funding, and assurances have been offered that they will not be neglected.

Some upgrading was done recently at Rachel’s Tomb.  But the Machpelah is in severe need of repairs, and is actually lacking a permanent roof for the main sanctuary for prayer.  It also requires some renovation to make it handicapped accessible. Presumably, the Civil Administration (of Judea and Samaria, under the umbrella of the IDF) is supposed to be considering this work.  But, as David Wilder, Hevron spokesman said, “I am sure that [Defense Minister] Ehud Barak is not going to help Hevron.”

I haven’t seen the criteria, but it seems worth pondering:

The windmill in Yemin Moshe in Jerusalem — which was a working windmill for the community that was first established 120 years ago outside the city walls — has been restored to operational condition,’ although how much it enhances our “heritage” if we see it moving, as compared to just seeing static, is not clear.

Yet, doing such repairs at the Machpela — the oldest religious site in Judaism with the cave itself dating back more than 3,500 years, and second in sanctity only to Har Habayit (the Temple Mount) — as putting a permanent roof over the heads of worshippers, and making it accessible to handicapped persons, is not considered of sufficient importance with regard to Jewish heritage to attend to.

Now here is THE question, which I will simply pose here:

Is there any relationship between the failure of the Ministerial Committee to approve work at these two sites, and the fact that the PA is appealing to UNESCO to declare them mosques rather than Israeli heritage sites??  This is part of the PA campaign to demonstrate that “the West Bank” belongs to Arabs and not Jews.

Corollary question: Is the Israeli government relinquishing its responsibility to stand up for Israeli/Jewish rights?

(As an aside: Obama — the great friend of Israel — is talking about renewing funding for UNESCO; I’ll focus on that in a coming post.)

I do not report on every attack, because I focus on various matters, but there have been a number of rocket attacks coming out of Gaza in recent days, including the launching of Grad Katyushas in the area of Beersheva over the weekend.
In 2011, 680 rockets and mortar shells were fired into Israel, including 80 Katyusha rockets; already this year, there have been close to 30 rockets fired into Israel.

Now the JPost reports that there are officers in the Southern Command that want to see a large scale offensive initiated against Hamas and Islamic Jihad.  The Southern Command, after all, had already been ordered to prepare for such an attack. And a senior officer in the Command is quoted as saying, “The ongoing attacks – by rockets and along the border – are cumulatively more than enough to justify immediate action.”

However, some officers are hesitant about going ahead.  Explains the JPost:

“The debate within the IDF is whether it needs to wait for a successful attack by Gaza terrorists – be it a rocket attack that causes casualties or a successful cross border attack – or if the sporadic rocket fire is enough of a justification to launch an operation today.”

And so my question here:  Are the decision makers in Israel so cowed by international public opinion that they won’t move to save Jewish life, which they know full well is at risk, until “sufficient” Jewish life has already been taken to more readily make their case to the world?

This mindset of waiting for casualties, I will add, is in no way specifically a function of the Netanyahu government.  I struggled with it ten years ago.  Somehow, back then, attempted terrorist attacks that failed weren’t sufficient “cause” for an operation.  But whether this is new thinking or not, it is something that requires a close look.

Returning very briefly — because “very briefly” is all that is merited — to the issue of the US position on an Israeli attack on Iran:

Today the NYTimes, not exactly a pro-Israel paper in the best of circumstances, ran a piece by “military analysts” regarding what Israel will have to contend with if she attacks Iran.  This was meant to discourage us, and downplay our ability to carry it off, of course.  Israel will need so many and so many planes, and will have to fly a long distance to get to Iran, and will need to refuel in the air.  Really?  Should we inform the IDF about this?

My favorite line from this article, offered in quotes: “It ain’t gonna be that easy.”  Gee, what a surprise.  They are making fools of themselves.

For the record, my very best information is that we do not have the capacity to fully knock out all of Iran’s nuclear development facilities (which is something the US could do), but we would be able to set them back some years.

A completely different, and exceedingly credible tone, was struck, however, by Stephen Blank, a professor at the Strategic Studies Institute of the U.S. War College.  Writing on the Politico website, he says very clearly that Iran is a regional threat, and that:

“…its policies appear driven both by anti-Semitism and aggressive, perhaps even neo-imperial, designs on the governments (if not the territory) of its neighbors. Tehran is likely to increase these terrorist activities, based on the belief that nuclear weapons could provide an umbrella and that its regional enemies are weak and irresolute.

“…The necessity of thwarting Iranian nuclear weapons should, therefore, be evident since it threatens its entire region.”

Are any decision makers in the US listening to this man?