On Tuesday — the day after the attack in New Delhi — there were two explosions in Bangkok, the capital of Thailand.  One explosion tore through a house (pictured below) from which three Iranians, one of whom was wounded, fled.  Apparently, this was a “work accident.”

A second explosion took place when a man of Iranian descent, who has been identified as part of the same terror cell, threw a bomb at police who were trying to arrest him; he blew his own legs off in the process.

Thai police are now saying they know with certainty that this cell had been planning to attack Israeli diplomats in the city.  “Their plan was to attach bombs to cars,” said one intelligence official.

This comes as no surprise, but signals ever more clearly that Israeli installations abroad must be on high alert everywhere.  That includes in the US.

In India, five suspects have been arrested in connection with the bombing of the Israeli diplomatic car (picture below) in which Tali Yehoshua Koren was riding.  Identification was not difficult: the attack took place in the Khan Market area, which utilizes security cameras because it is considered a “hotspot” for foreign nationals.  Footage showed the suspects “loitering around” the embassy car.  Most significantly, cameras picked up the face of the man — “well-trained” police are saying — who attached the bomb to the car and the explosive that was stuck to the car.

Police have also located an abandoned red motorbike and are trying to verify if it was the one utilized in the attack.

A team from Israel is on its way, to help with the investigation. 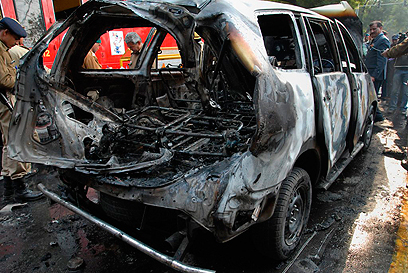 Tali was actually hurt more seriously than first reports indicated.  The shrapnel injured not just her legs but the lower and mid part of her body including her liver.  She suffered partial paralysis but is said to be improving at a rapid rate, is comfortable, and is expected to be brought home to Israel before long.  Right now her mother is on the way to be with her.

From what I’m reading, she was quite something at the time of the attack. She managed to get out of the car, make her own way to the hospital via a rickshaw, and to call the embassy to let them know what had happened.

One potentially positive effect of this attack in New Delhi is that Saudi Arabia has now offered India additional supplies of crude oil to replace oil currently being supplied by Iran.  The more India is weaned from commercial interaction with Iran the better.

As to the Iran situation more broadly, tensions are escalating.

On the one hand, Iran is flagrantly continuing its pursuit of nuclear capability — including the unveiling of a new centrifuge and the loading of the first domestically made fuel rods into a reactor.  Said one Israeli official: “Anyone who still thinks Iranian efforts are peaceful also probably believes in the Easter bunny.”

On the other hand, there are reports that sanctions are starting to weaken Iran.  Ilan Berman reports that Iranian currency is plummeting, that half of the population is below the poverty line, and that the Iranian government has recently defaulted on payment for foreign commodities — such as rice that had been supplied by India.

But there remains the question as to what this means or what it’s worth if Iran is continuing its nuclear advances.

Says Berman, “the United States and its allies haven’t bothered to send that message [to the populace that the nuclear ambitions of their government are an economic and political liability]. And because they haven’t, Washington and European capitals run the risk of squandering a signal strategic opportunity. Without a potent countervailing message, Iran’s leaders are sure to cast the current economic hardships being experienced by ordinary Iranians as a product of overbearing Western pressure—and their population’s resistance to them as a sign of patriotism.”

And, I will add, what Berman is referring to doesn’t even include the further message to the Iranian government that all options, including the military, truly are on the table.  From what I’m reading, Iran considers the words of the Western world to be just bluff.

With regard to this issue, it feels very much as if it’s Israel against the world.  From an assortment of international sources come messages about how it would be unwise for us to act “prematurely.”

The question is how to define “prematurely.”  The US and Israel are at odds on this — with Israel concerned about the point at which Iran has hidden equipment too deeply into bunkers to reach, and the US saying there might be other things that could be hit later that would still disable Iranian efforts.

Dennis Ross, former US envoy, has just written in a NY Times op-ed about how it’s important to still give diplomacy a chance.  Give diplomacy a chance??? Precisely what does he imagine has been happening until now?  The problem is that the world didn’t start to get even semi-serious until very late into the countdown.  And somehow that’s our fault — even though our prime minister has been delivering warnings for years.

“Many experts doubt that Tehran would ever accept a deal that uses intrusive inspections and denies or limits uranium enrichment to halt any advances toward a nuclear weapons capability…But before we assume that diplomacy can’t work, it is worth considering that Iranians are now facing crippling pressure and that their leaders have in the past altered their behavior in response to such pressure. Notwithstanding all their bluster, there are signs that Tehran is now looking for a way out.”

I wouldn’t count on that.  Ilan Berman surely wouldn’t, given the current situation.

Defense Secretary Barak commented, with regard to the Iranian announcement about its latest achievements, that, while Iran remains a threat, part of this is a “show,” “presenting a situation as better than what it really is.”

While the Iranians are most certainly capable of this, I cannot help but wonder if Barak’s comments are not designed in part to reassure the international community that we are not rushing to attack on the strength of this.

For coupled with this we have a statement from Defense Secretary Panetta, that he doesn’t think Israel has decided yet about a military strike.  What is this man’s game?  (And why do his prouncements and Barak’s seem to coincide?) Just recently Panetta announced that we were probably going to hit Iran between March and June.  Personally, I believe that we’d all be better off if he just kept what he thinks to himself.

Switching to the subject of Israel’s relationship with the PA:

Exceedingly important right now, in my  opinion, is Israeli strength in defending her sovereignty — relinquishing neither rights nor territory.  And I’m not happy at all about certain things that I’m seeing.

I will deal here with one issue: that of Joseph’s Tomb, which is near Shechem (Nablus).  More will follow in due course.

According to the Jerusalem Post , the PA has rejected a request by Israel that its security forces on the site of the Tomb not carry AK-47 Kalashnikov assault rifles.  It is entirely unclear why the PA should imagine such weaponry is necessary at a holy site where Jews come to pray — unless it’s to “stick it” to Israel, deliberately defying what we request.  Or worse.

Seems the PA has no problem asserting its administrative rights over this site, which is in area A — an area designated by Oslo as being under PA control.  But this situation is not as it should be and I am unsettled.

With thanks to Aaron Lerner, who put it up on IMRA (http://imra.org.il/story.php3?id=55718), I cite the 1995 Interim Agreement of the Oslo Accords, which stipulates that even though the site is under PA control, Jewish forces should be in the area “to ensure free, unimpeded and secure access to the relevant Jewish holysite [Joseph’s Tomb being mentioned specifically].”  What is more, “Israeli plainclothesguards may be present inside such sites.”  None of this is happening.  Previously, there was an Israeli armed guard that accompanied Jews going to pray at the site.  Now, under a new agreement, it is being left entirely to the PA.

What is more, the PA is permitting once a month visits to the site, rather than the unimpeded access by Jews that should be possible day in and day out.

Last April, a trigger-happy PA security policeman at the Tomb killed Ben Yosef Livnat and wounded four others as a group was leaving the site after prayers. Admittedly, they had gone in without IDF clearance, but they had gone to pray and were known by the PA security people.  I have never seen anything that “explains” how this could have happened.  I don’t believe there is anything that could explain it.  They were not a threat, and there was no reason to shoot at them.

And so, the JPost report explains, the IDF has worked on improving coordination with the PA security forces.  And now a new understanding has been reached with the PA, which will keep 10 police officers — who will be provided with strict rules of engagement — stationed at the Tomb at all times.

I write this, but do not pretend to understand it.  The PA police have been given new rules of engagement, and they’ll be carrying assault rifles.  So we no longer have to worry — they’ll never shoot a Jew there again. Right?

And there’s more: The IDF is allowing the PA to expand its security control to additional parts of Judea and Samaria.  Of particular note is that they are being given permission to operate in Sebastia, which is in Area C, designated as being under full Israeli control.

And last month, Israel decided to ignore the establishment of two PA police stations outside of Jerusalem in Area B, which is under PA civil control and Israeli security control.  The State is not demanding the removal of these stations, located in Arab villages — for Israel is just as happy not to have to deploy police and IDF there.

NOT a good scene…

What makes this all the more maddening is that we are not on the cusp of anything good with regard to the PA.  Hamas — whether it will eventually or not — has not split, and Abbas and Mashaal are scheduled to meet in Cairo in one week to work on to unity issues.

The unity arrangements were to put a stop to all pretense of “peace” negotiations or gestures to bring Abbas back to the table.

Let’s end, before Shabbat, with briefs in the “Good News Corner”:

Scoliosis, a deformity of the spine, has now been addressed by an Israeli company, ApiFix.  It has developed a unique implant, with a technique for minimally invasive corrective surgery that will change lives.
__________

Wow!  According to the Wall Street Journal, Tel Aviv beats all European cities as a technological city.  It hosts 600 early stage companies; access to venture capital is double that of the USA and 20 times that of Europe.
__________

The Delek Group has announced the discovery of  yet another large deposit of natural gas, 120 km northwest of Haifa.  This site, Tanin-1, may become Israel’s third-largest natural gas field. They’re talking about 1.2 trillion feet of natural gas.