Haifa Police District Chief Superintendent Ahuva Tomer, 53, who was grievously injured in the Carmel Forest fire, has passed away.  She was so badly burned, not only over her skin, but with heat having seared her lungs, that I believe it is appropriate to say in this instance her passing might be considered a blessing.  Her suffering, had she lived, would have been immense. 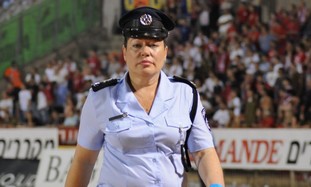 She is to be saluted for her bravery and her devotion to her job.  The JPost had this to say about her today:

“Those who knew her well say that throughout her police service, Tomer’s personal warmth and self-effacing humor, coupled with her professionalism and absolute dedication to the personal security of Haifa’s residents, made her one of the most esteemed and popular police commanders in Israeli history…Her determination to manage crises from the field rather than the office…has been held up by her commanders and subordinates alike as model leadership conduct.”

That “refusal to stay in the office” has now led to her death.

I have picked up comments from experts in forestry who say that a reasonable amount of recovery of the Carmel Forest can be expected over time even if  no re-planting is done.  The pines of the Carmel region have cones that respond to heat by splitting open and scattering their seed — causing new trees in large numbers to sprout.  Additionally, some of the larger trees had roots so deep that they will have survived and in time will regenerate tree growth.

Work in the forest will be necessary to facilitate this to the maximum.  But I’m reading that it might be appropriate to wait a year to see what grows naturally before new planting is done.

If you haven’t yet made a donation towards fire recovery, and are still considering doing so, you might want to consider helping people first.

The Haifa Fund — which I mentioned in my last post: http://www.haifa-foundation.org/contact_us.htm — is attending to the immediate needs of people who have suffered from the fire, lost their homes, etc.

Their assistance will go to families bereaved by the fire, and to the destroyed Yemin Orde — a youth village that is a residence and school for troubled or disadvantaged youth.

(If you donate here, clarify in the “comments” that you are donating for the fire emergency fund.)

Prime Minister Netanyahu — whose popularity is up since the fire crisis — is appointing a team for Carmel rehabilitation, headed by Netanya Mayor Miriam Fierberg.  He says he is seeking to make the rehabilitation process “as short as possible.”

There are three missions, he explained: “to return home the people who were evacuated and to care for those who were harmed; to rebuild those homes which were destroyed and restore infrastructure; and to assure the rehabilitation of Mount Carmel.”

Then he addressed head-on what (some) people are thinking, if not saying: “Two of these missions are immediate.  And when I say immediate, I do not mean months or years from now, as was the case with the Gaza Strip settlements.  We want a different type of treatment here — very quick and very efficient.”

Some 250 homes plus other structures were destroyed in the fire — many  others were damaged — with Yemin Orde, Kibbutz Beit Oren, and the Ein Hod artists’ village hit the hardest.

The Cabinet has approved an emergency aid package of 60 million shekels.

Temporary compensation of 2,500 shekels (close to $700) per person for purchasing basic necessities will be provided for those who cannot return home within a month.  The prime minister has instructed the Construction and Housing Ministry to provide mobile homes for those now homeless; Welfare and Social Services Ministry will increase social services in the area.

Netanyahu is not eager to address the issue of who is responsible for Israel’s weakness in firefighting capacity.  Avoiding the question of whether he will appoint a government committee of inquiry, he says he is focused on rehabilitation, and on building a better firefighting capacity now.

The Knesset, however, may be inclined to push for a formal inquiry.  Minority Affairs Minister Avishay Braverman (Labor) has called for a formal commission of investigation, declaring that “If we don’t pay attention to what occurred and fearlessly investigate it, then we will not learn the necessary lessons.”

Don’t know that a civilian Winograd Committee (which is what Braverman is calling for) is the way to go.  But he is certainly correct that we as a nation have many failings to address head-on.  Unfortunately, it all becomes so politicized.

Right now fingers are being pointed at Interior Minister Eli Yishai (Shas), as his ministry oversees the firefighting infrastructure.  But Yishai, attempting to duck, claims that he made requests for additional funds that were ignored by the Finance Ministry, headed by Yuval Steinitz (Likud).  Yishai even referred back to former Prime Minister Sharon, who had established weak policies on the matter.  On it goes — there’s lots more — and it’s not a pretty picture.

A report by State Comptroller Micha Lindenstrauss — drafted before the Carmel fire — will be released very shortly; the Knesset State Control Commission will hold hearings on its findings.

Saying that international assistance to Israel during the Carmel fire crisis “should serve as a model for additional collaborations in the region,” Netanyahu has now also proposed a regional fire extinguishing force that would additionally assist in cases of natural disaster. He has communicated with the Greeks, Egyptians, and Jordanians regarding this plan, and is clearly looking for an improvement in relations with Turkey.

Can emergency assistance be parlayed into something more positive with regard to our relationship with our neighbors?  Obviously, that is what our prime minister is hoping.  Unfortunately, the possibilities remain dim.

Turkish Prime Minister Recep Tayyip Erdoğan has said that the Turkish readiness to send two firefighting planes to help Israel was in the nature of a humanitarian act and does not substantially change the situation.

Speaking to the Turkish parliament today, he said:
“If anyone wants to turn a new page, they must first admit their crime… apologize and pay compensation.”

(This, of course, is with regard to the incident last May in which “activists” sailing on the Mavi Marmara — part of the flotilla that left from Turkey and was attempting to break the Israeli naval blockade of Gaza — attacked Israeli soldiers when they boarded the ship after it refused to change direction.  The attack was obviously premeditated, and the soldiers’ self-defense resulted in the death of nine Turkish citizens.)

“And we are also saying that the embargoes — which have been relaxed but that’s not enough — must be lifted.

“If we see these steps being taken, then we will evaluate the situation…”

According to AFP (Agence France-Presse) news agency, diplomats from Israel and Turkey met in Geneva over the last couple of days to try to smooth over relations between the two countries.  AFP says:
“The two sides are reportedly seeking a deal, under which Israel would apologize over the raid and compensate the families of victims, while Turkey would agree to send back its ambassador to Tel Aviv.”

Let’s hope AFP is wrong, for an Israeli apology would be revolting.  There is no comment from the Israeli government.

And Egypt?  Seems they’re having a problem with sharks coming into shallow water and attacking tourists in the Sharm el-Sheikh area at Nama Bay.  One shark bit off the arm of a snorkeling tourist.  According to an Israeli shark expert in Eilat, this is likely happening because over-extensive deep-water fishing has deprived the sharks of food, driving them  into shallow water.

But that’s not the way the Egyptians are seeing it.  Said South Sinai Governor Muhammad Shousha, according to an Egyptian state news site:

“What is being said about the Mossad throwing the deadly shark [in the sea] to hit tourism in Egypt is not out of the question, but it needs time to confirm.”

The Israeli response– that the claims were “too ludicrous” to comment on — is appropriate.  But how, pray tell, does Israel establish better relations in the face of a mindset such as this?

Last Friday, Brazil recognized a Palestinian state, and yesterday Argentina did the same, recognizing a “free and independent” Palestinian state based on 1967 borders (sic).  The Argentinean Foreign Ministry said this recognition was designed to help “definitively advance the negotiation process that will lead to the establishment of a just and lasting peace in the Middle East.” Uruguay has announced intention to do the same in 2011.

“Recognition of a Palestinian state is a violation of the interim agreement signed by Israel and the Palestinian Authority in 1995, which established that the statue of the West Bank and Gaza Strip will be discussed and solved through negotiations.”

Clearly, such international moves as this encourage PA obstinacy and foster the fallacious thinking of its leaders, to whit, that they can have it all without making any compromise.

Secretary of State Hillary Clinton is reportedly preparing a major statement on the peace process.  Mindful of the length of this posting, I will table discussion of this and much more for the next posting.