The dense forest area on the mount of Carmel, at the edge of Haifa, was a well known and magnificently beautiful spot.  Until a couple of days ago, it looks liked this:

But, as most of you undoubtedly know, a fire started in that forest on Thursday, that turned into a raging inferno — without a doubt the worst fire Israel has ever had to cope with: 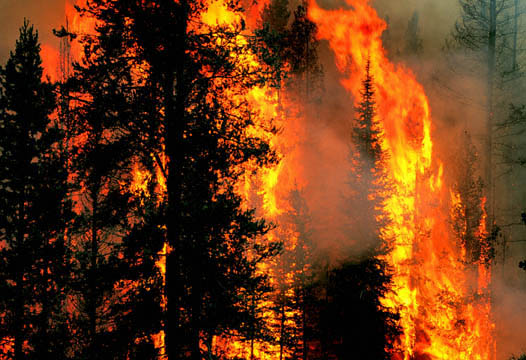 When the winds blew, this inferno advanced at a rapid rate as a wall of fire reaching 40 meters (that’s more than 130 feet) high. When I learned of this before Shabbat, it sent shivers through me, but I tell you frankly that it’s difficult for me to envision.

Now that Shabbat is over, I wanted to do this posting, providing basic information with as much clarity as I can achieve about this tragedy, which surely most of you are already aware of at one level or another.

Our grief, first is for the 42 persons (so far identified) who were lost in the fire.  Forty one were prison guard cadets who were being rushed to the local Damon prison to help evacuate prisoners who might be at risk in the fire.  Their bus was overwhelmed by the advancing fire and falling trees. Only two survived from that bus.  Most of the dead were Druse.  Additionally, a 16 year old volunteer firefighter, Eldad Rivan, who had rushed to join his unit, perished.

And for those who have been injured.  Most notably, Haifa Police District Chief Superintendent Ahuva Tomer, who was in a police car following the bus with the cadets.  She is now in Rambam Hospital in Haifa, fighting for her life, after having been burned over most of her body.

In all some 16 persons have been injured in the fire.

There is sadness for the suffering of those involved at a variety of levels — the hardship of the firefighters and the residents of nearby communities who lost their homes.

And there is certainly grief that wildlife in the area have perished (although rescuers have tried to bring out as many as possible, especially from an animal reserve area at Hai Bar), and that some 5 million trees have been lost — trees that may take as long as 40 years to be replenished — over an area of some 12,500 acres (50,000 dunams).  What a loss.

The initial fire is now thought to have been started by two brothers, aged 16 and 14, who carelessly started a bonfire near their home in the Druse town of Usfiya.  They have been arrested.

But there is a strong belief that other secondary fires were lit by arsonists, as well. As one police officer explained:

“It is not a fire that is consuming an entire area. If you stand in one place you can see fires that are four or five kilometers apart. These were not set by a spark flying in the air.”  It is likely that we will be hearing more on this.

Clearly, the fire was far worse because of the drought we are currently enduring.  The forest was bone dry.

Every possible resource available to Israel was called out to fight the fire and manage the emergency — fire fighters, police and army personnel.  Particularly distressing was the poor quality of the firefighting infrastructure and the lack of sufficient personnel.  Israel simply was not prepared for this, and there will be a great deal more to say about this matter.

Prime Minster Netanyahu put out a call for help, and the international response has been exceedingly gratifying:  Assistance has come in the form of personnel and equipment, including planes, helicopters and chemicals, first from Bulgaria, Cyprus, Greece and Turkey and then from the UK, the US, Jordan, Egypt, Switzerland, Russia, Holland, France, Azerbaijan, Spain, Germany, and Romania.  This has been most heartening.

In a talk to the nation tonight, PM Netanyahu said there is nothing to be ashamed of, that we had to call on international help.  We should have been better prepared, but indeed there is no shame in having needed help.  Israel is often the first nation in the world to respond to crises elsewhere.  Good to know that there are those who will respond to us.  The thought has already been raised that the goodwill generated by this event might have some diplomatic carryover, e.g., in our relations with Turkey.

The Foreign Ministry has been coordinating this international aid.  (According to Danny Ayalon, deputy foreign minister, tonight, some of those who came to help us now had been recipients of our assistance in the past.)

Israel has also leased the huge “supertanker” plane from a US company, Evergreen; it can hold over 80,000 liters of water or firefighting chemicals, sixteen times the amount of the average firefighting plane.  It is coming in from California, and I believe is due to arrive at about 1 AM this morning.

Heartening, as well, to see how Israelis respond in the emergency with caring and selflessness.  This is a typical Israeli pattern and a source of enormous pride.  Many homes were opened — especially in the Shomron (Samaria) — to those who had to flee the fire.

As I write, the fire is dying down in some areas, but there is concern about winds that come up at night fanning the flames again.  It is hoped that the arrival of the “supertanker” may make the critical difference.  Not only is it the largest of firefighting planes, it is the only one able to operate at night. (I have no clue why this is so.)

People living in some areas — Tirat Carmel, the Denya neighborhood of Haifa, Kfar Galim, Kibbutz Hahotrim and Moshav Megadim — who had been evacuated, have now been permitted to return to their homes.

According to my information, other areas are still off limits — Ein Hod, Nir Etzion, (where some houses have been destroyed) and Yemin Orde.  The fire is still active on the eastern section of the mountain ridge — around Usfiya, Daliat al-Karmel, Kibbutz Beit Oren (which has been significantly destroyed), and Hai Bar.

Undoubtedly, this will be updated tomorrow.