Chanukah has begun and, as is my custom, after lighting candles I sit before them quietly, searching for peace, contemplating the way life does go on. And determined, absolutely determined, to find inspiration for strength and hope.

A weighty task in today’s world.  But to despair is forbidden.

And so on that note….

Please see my latest piece, up on Front Page Magazine.  It deals with the pro-Arab US State Department, and its offensive response to requests for a public position regarding deprivation of Jewish religious rights on the Mount of Olives.

See it, and share it, because this is the sort of thing people need to know.

An agreement has been reached between the government (with Minister Benny Begin actively involved on its behalf) and the Yesha Council (working with the residents of Ramat Gilad) that would prevent destruction of the small community.  According to this agreement, the outpost would be considered part of the community of Karnei Shomron, and five caravans on disputed land would have to be relocated. 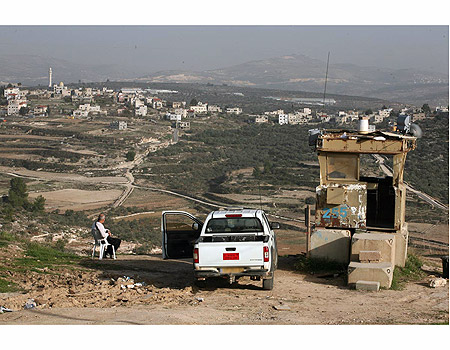 This serves as a perfect example of a way in which small “unauthorized” communities in Judea and Samaria can be saved instead of being razed.

As a small aside, I would like to call attention to what Danny Dayan, chair of the Yesha Council, said yesterday, according to the JPost:

“The agreements were already 95 percent ready…before the attacks. Suddenly, Defense Minister Ehud Barak created a provocation of preparing forces to evacuate Ramat Gilad and that’s what led to the violence.”

The “attacks” he refers to are the incidents involving youth, primarily at the Ephraim’s Brigade base, which I recently discussed.  Barak’s provocation should be duly noted.

A brief background regarding this complex and sensitive subject of dealing with “illegal outposts::

It has been Israeli government policy since the time of Menachem Begin not to build on privately owed Palestinian land in Judea and Samaria.

Peace Now, however, works on the assumption — a HUGE assumption — that any land in Judea and Samaria that is not specifically government land is privately owned Palestinian land.  And so this group (which is not even a registered NGO in Israel and receives funding from abroad), goes to the High Court and makes charges against outposts, claiming they are situated on Palestinian land.  The group makes this claim even though it has no standing in the relevant cases and even though NO Palestinian has come forward to claim the land.

This was the situation regarding Ramat Gilad.  Once the charge was made, the government acquiesced, as it often does, making a commitment to address the situation per the charge — which at that point meant destruction of houses.

Moshe Zar, who lives in Karnei Shomron, claims that he purchased the land for Ramat Gilad privately, but the civil administration  maintains that there was lack of sufficient documentation with regard to one area.  The agreement being drafted now would move the caravans from the area that is contested.

Zar says he is content with this compromise for now so that Ramat Gilad can be saved.  The fight concerning the legality of the contested area will continue in court, however, even after the caravans are moved — for Zar insists that his documentation is in place.

News reports have it that the agreement is not quite finalized.  One source I spoke with indicated that the hold-up is the fact that Defense Minister Barak has not signed it yet.  Another source said everything has to be precisely in order and then the agreement has to be submitted to the Court for final approval.

But it was Danny Dayan — who speaks for the Yesha Council, a party to these negotiations — who provided an explanation for me that had the most clarity:

No Barak has not signed, and Dayan doesn’t know that he is going to sign.  But, he says, this is not going to be a formal agreement that requires signatures: It is an informal understanding.  And, as such, it has, he believes, “passed the point of no return”  It is in place, and has been accepted by both sides.  Yes, says Dayan, this understanding will be brought to the Court — by January 5, if not before. But if both sides have agreed, the Court will accept it.  It’s not a question of waiting with bated breath to see what the Court says.

The bill, which would apply only to settlements of more than 20 families in Judea and Samaria, provides that if no land owner (i.e., Palestinian Arab land owner) had appealed to the court for redress within four years, a customary length of time, then the houses built on the land could not be destroyed.  If an individual subsequently appealed to the court, the court would be able to dictate financial compensation.

The originators of the bill released a statement, which read:

“…in the past few years a number of petitions have been filed in Israel by public organizations fighting against Jewish settlements in the West Bank, and their interest was to destroy communities or neighborhoods they claimed were built on private land. The Justice Ministry and Supreme Court believe the only way to deal with these situations is to demolish the buildings.

“This bill is intended to prevent more homes from being destroyed…”

What it does is present a very rational alternative that would avoid the horrendous heartache of young families who are pulled from their homes and then must watch as bulldozers take them down.

What it also does is remove from organizations like Peace Now the ability to meddle for political ends as they now do.

“No one wants to take over land that belongs to a [Palestinian Arab] family, but there is a long way between that and declaring that all non-state land is Palestinian land,” said MK Yuli Edelstein (Likud).

It had been thought at first that the prime minister would be for this, but it turned out that he declined to support it.  In fact, he  instructed the Minister of Justice to ensure that the legislation would be rejected by the Ministerial Committee on Legislation.  And, indeed, that is what happened this past Sunday.

What Netanyahu had previously committed himself to was creation of an outpost committee that would review challenges to government designation of specific areas of land as belonging to Palestinian individuals [when no such individuals have come forward]. But as of this date, no committee has been appointed.

The fact that the Ministerial Committee didn’t approve this legislation doesn’t mean it cannot go forward.  Its sponsors intend to make sure that it does.  But it’s a much harder haul.

As a first step, an appeal is being made to the Ministerial Committee for a re-vote on the legislation.  MK Orlev is convinced that a majority of the committee is actually for it. But the political pressures are overwhelming, and apparently some members of the committee chose to absent themselves when the original vote was taken.

The bill — whether the Ministerial Committee approves it or not — can then advance to the Knesset for three readings.

A group known as the “Judea and Samaria Joint Residents’ Council,” is launching a lobbying campaign to move this bill forward.  Representing the councils of the Shomron and Binyamin, the Joint Council is focusing on saving the outpost of Migron — but their efforts will help across the board.

What seems important with regard to this legislation is that there is movement in the direction of changing the situation — even if success will take time.

Sometimes I wonder if the Palestinian Arabs have a special thespian gene, or if they have hidden drama schools for their officials.  They are the best, the very best, at presenting their alleged case even when it is riddled with lies.

All of this occurred to me as I read yesterday what Palestinian negotiator Saeb Erekat had told journalists:

“We have come a long way on each issue, and today, as we end 2011, my heart is aching that we do not have a partner for peace.”  Got it? His heart is aching.

The PA might collapse soon, he warned, if there is no progress in the “peace process”:  What has to happen is that Western leaders must press Netanyahu to accept the pre-1967 lines.

I had a similar experience when I began doing research on UNRWA some years ago.  The Arab PR representative who met with me looked into my eyes and clutched his chest, as he told me with the deepest (feigned) sincerity about the situation of the refugees.

He’s gooood, I thought then.  And the fact that he and others have been so good at what they do is part of the reason why the Western world did not grapple honestly with the issue of UNRWA for a very long time.

Thus it is heartening to see that this situation is beginning to reverse itself.  There was Danny Ayalon’s video, which I shared recently.

And now I see that Elliot Abrams, writing for the Council on Foreign Relations is calling for the dismantlement of UNRWA:

“…But those are criticisms of how UNRWA is carrying out its mission, while the deeper problem is the mission itself. That mission might accurately be described as enlarging the Palestinian refugee problem forever and thereby making any Israeli-Palestinian peace agreement tremendously more difficult if not impossible to achieve.

“Starting the process of closing down UNRWA would be a move toward peace, as it would replace the permanent perpetuation of the Palestinian refugee problem with a process designed to reduce it in size and some day solve it.”

Those of use who have been fighting this fight for a long time now begin to breath a sigh of relief — not that the fight is all over.

Who knows, maybe some day I’ll be writing about calls for the PA — an entity that works against the goals of true peace — to be dismantled, as well.

An elaboration on my last posting, for the sake of providing full information:  I spoke of the dispute between those who like salt and those who like sugar on their potato latkes.  But — as readers reminded me — I neglected to mention two other tasty alternatives, applesauce and sour cream.

Let me close by sharing a video clip of opera at the food market at Dizengoff Center in Tel Aviv on a recent Friday.  A clip to make you smile: