In the interests of accuracy, an addition to the information I provided last week on the excellent video “Israel Inside”:  Tal Ben-Shahar did not generate the original idea for this film — although he did run with it once he was approached.  The producer of the film, Rafael Shore, conceptualized it and came to Tal with the idea.

As to that “start,” I am referring to a delay that was requested by the government on the demolition of Givat Ha’Ulpana:

On instructions from the government, the attorney general went to the High Court on Friday and requested that the Court release the government from its pledge to demolish housing in Ulpana this very week.

Before I proceed further, I want to point out what we are seeing here:  Just days ago, I was reading, from multiple sources, that it would be impossible, or near-impossible, to stop the demolition, because the Court had ordered it on the pledge of the government.  That was nonsense, as many of us understood.  And what we see now is how politicized this process is — how much it is a question of political will.

What the attorney general told the court was that the State wants to re-examine its policy that automatically mandates the  removal of all “unauthorized” buildings on “private Palestinian land.”  Each case should be decided separately, but as things stand now a decision regarding Ulpana impacts other sites.  “Other sites” that are most immediately pertinent are Givat Assaf, which the government pledged to dismantle by July 1 and Amona, which is slated to be dismantled by the end of the year.  Migron, about which I’ve written extensively, would likely also be affected.

Each time I see reference to “private Palestinian land,” I have this great impulse to ask, “Seez who?”  This is another issue that is really politicized.  We’re not talking about land that has documented ownership by a Palestinian Arab, but rather situations in which ownership is unclear, or, worse, in which Jewish ownership has been challenged — situations in which sometimes land is almost arbitrarily designated as “Palestinian.”  (There is a convoluted history here that I will, perhaps, revisit.)  In the instance of Ulpana, the Beit El community claims ownership and this claim has never been adequately examined in the courts.

The government requested a delay of 90 days; the Court has granted 60 days.

A matter to be followed closely…

Givat Asaf is a community of about 30 families that was established in 2001, in memory of Asaf Hershkovitz, who had been killed by terrorists.  Associated with the Beit El Local Council, in Samaria, it is about 3 kilometers from Beit El.

(A note of correction here: Beit El functions politically within its own Local Council and is not part of the Binyamin Regional Council.) 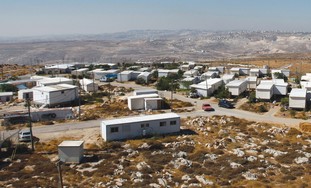 Amona is part of the Binyamin Regional Council of Samaria.  On a hilltop that overlooks Ofra, it was founded in 1997 by young people from that community.  It was the site, six years ago, of violent (obscene and shameful) police/IDF actions against residents of the area, as action was taken to dismantle homes.

There were some 30 families in this community, and it has never been abandoned.

I follow through here with additional reports on attacks by Arabs.

Last Thursday was a day of particular Arab unrest/violence precisely because it was Yom Ha’Atzmaut.  Outside of the walls of the Old City in Jerusalem, there were two incidents.  In one — in the valley of Hinnom — members of a family were attacked and required hospitalization; in another — outside the Lion’s Gate — an 11 year old boy received injuries to his head.

Last night, in Hevron, in the Beit Hadassah neighborhood, Arabs attacked a group of Jewish children in a playground with rocks big enough to kill.  The children escaped, but residents noted “a sharp escalation in the size of the blocks thrown.”  The rocks were thrown from the roofs of two vacant buildings into which Arab squatters have moved. Those throwing the rocks ran away before the IDF arrived.

Bad news.  But why am I not surprised?

From The Investigative Project on Terrorism:

“In a major concession, Obama administration officials say they could support allowing Iran to continue a crucial element of its disputed nuclear program if the government in Tehran took other major steps to curb its ability to develop a nuclear bomb.  The officials told the Los Angeles Times they might agree to let Tehran continue enriching uranium up to concentrations of 5% if the Iranian government agreed to unrestricted inspections, and strict oversight and safeguards that the United Nations long has demanded. Iran has begun enriching small amounts of uranium to 20% purity in February 2010 for what it contends are peaceful purposes, although most of its stockpile is purified at lower levels. Uranium can be used as bomb fuel at about 90% enrichment.  The question of whether to approve even low-level enrichment is highly controversial within the U.S. government and among its allies because of the risk that Iranian scientists still might be able to gain the knowledge and experience to someday build a bomb…”

This definitely does not meet PM Netanyahu’s red line stipulations.

At the very same time, security specialists have reported to Congress that “Iran is recruiting a hacker army to target the U.S. power grid, water systems and other vital infrastructure for a cyberattack in a future confrontation with the United States.”  This was reported by the Washington Times, which acquired the testimony to be provided to Congress.

Khaled Abu Toameh reported yesterday that Fatah officials, who are feeling increased confidence as the result of positive election results lately on Palestinian campuses and in professional unions, have been encouraging Abbas to replace Prime Minister Salam Fayyad (an independent) with someone from Fatah.

This is not an action that Abbas would take lightly, however, because Fayyad is so heavily favored by the international community.  Reports I have read today indicate that Abbas and Fayyad have met and “smoothed over” recent tensions.

Fayyad (the “moderate”), for his part has — according to Ma’an — voiced a pledge in Ramallah to fight for the use of the PA curriculum in the 50 Arab schools run by the municipality of Jerusalem.

This is actually a hot issue that had many people tearing their hair out for a long time.  For years, the municipality and the government turned a blind eye while Palestinian Arab students studying inside of Jerusalem were allowed to utilize PA-produced textbooks, which promote jihad and give Israel no legitimacy.

In 2011, in a move that was long overdue, the municipality set a stipulation that all schools in the city that receive government funding would be permitted to use only textbooks prepared by the Jerusalem Educational Administration, a joint body of the municipality and the Israeli Ministry of Education.