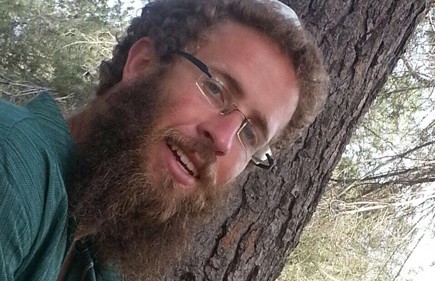 His name was Shalom Yohai Sherki, and he was 25.  On Wednesday night, he was standing at a bus stop in the French Hill neighborhood of Jerusalem, and a car rammed into him and the woman standing next to him. Both were rushed to the hospital in critical condition.

On Thursday morning, he succumbed to his head wounds; his brother later expressed gratitude that he held on until the family was able to say goodbye.

Again? We cried at this news.  Is there no end?

Shalom worked as a counselor to teenage students.  I did not know him personally, but am close to people who did.  I am told that he was much loved by his students and that he was a wonderful person.  Always with a smile on his face. Somehow it is the special ones who die.

The driver of the car that ran into these young people? An Arab – from a village near Jerusalem.  Police are indicating that they believe this was a terror attack (an attack with “nationalist” motives, is how they say it).  We knew, as soon as we heard what had happened.  The Arab will be interrogated by the Shin Bet.

The funeral, attended by thousands, was held in Jerusalem late yesterday.. This happened on Yom Hashoah.  Likely not a coincidence, as this would have played into the timing of the Arab who drove the car.

More painful, to lose someone else as we are mourning the six million lost.

I am frequently in absolute awe of the strength of the families losing loved ones to terrorists, and so was it the case yesterday. This sort of strength is a reflection of religious faith.  Shalom’s father is Rabbi Uri Sherki. At the funeral, Rabbi Sherki, noting that his son saved the woman standing next to him by moving quickly to push her aside, said:

“Go dear son, it is not difficult because your noble soul is ascending straight to the King of Peace.

“…It’s not by chance that you were separated from us on Holocaust Remembrance Day.

“Our family didn’t wander for two thousand years and return to Israel to be murdered but to be planted… We need to be strong, both in our private work and in the work of the government, which will know how to appropriately plant the people of Israel in its land.”

The woman who was next to Shalom is Shira Klein, 20, currently in serious but stable condition in the hospital.

I learned this morning that Shira and Shalom were due to become engaged.  Brings tears to the eyes.  Again, again.

Her family is asking for prayers for her complete recovery:  Shira bat Adel Ada.

I could not go into Shabbat without posting this.  Dear God, may there be no more Jews who die ONLY because they are Jews.  As you pray for Shira’s recovery, pray for this, as well, please.

We say Baruch Dayan HaEmet: Blessed is the Righteous Judge.

With wishes for a Shabbat Shalom to all.